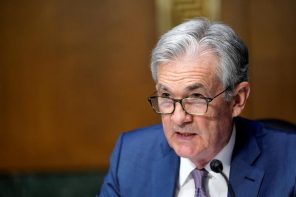 Improving economic prospects have boosted bond yields. Fed boss Jerome Powell and his global peers will welcome the cause but not the effect. If their rhetoric can’t halt the sharp rise in borrowing costs, they will be forced to ramp up asset purchases to safeguard the recovery.

Commissioner Thierry Breton wants an advanced semiconductor plant to cut reliance on Asia. The problem is that Europe’s chip designers and carmakers are ill-equipped to use such a cutting-edge site. Getting them on side, and investing more in research, is the place to start.

China’s $10 bln retailer Suning.com threw a financial lifeline to the troubled property developer. Its founder is now selling a controlling stake as the embattled group faces $5 bln of debt due this year. A government bailout, which may be imminent, would send the wrong message.

The U.S. telecom titan is spinning off its pay-TV business in a $16 bln deal, six years after buying it for $67 bln. TPG will share control while kicking in just $1.8 bln for a 30% stake that includes a 10% cash coupon. It’s a pricey way to ease out of a disastrous acquisition.

The home-sharing app’s quarterly revenue fell 22%, yet still beat rivals. Because it went through its growing pains in private, Airbnb’s first results as a listed company show an already solid business. Many startups taking the blank-check route to market won’t have that luxury.

The exchange for bitcoin may ink a $100 bln valuation in an upcoming listing. Growth and profit are encouraging. But its model relies on transactions, and past crashes are a problem. More disclosure would be reassuring. The prospectus leaves room to assume the worst.

Paper maker Mondi may bid for envelope rival DS Smith, according to Bloomberg. Wrapping in debt and a premium, the box specialist could be worth 9 bln pounds. The e-commerce boom justifies Mondi pivoting from declining office paper, but only if it can unpack big synergies.

U.S. borrowing costs are climbing. That’s less of a problem for stock markets when the cause is rosier growth prospects. Jay Powell says he isn’t about to tighten monetary policy, the usual party pooper for equity rallies. But inflation concerns would quickly sour the mood.

The Swedish fintech’s next funding round could value it at $30 bln, and it’s mulling a direct listing. Allowing early investors to cash out carries obvious appeal. The downside is there would be a daily commentary on Klarna’s regulatory risks and shortcomings relative to rivals.

More drinking at home and higher raw materials costs will pressure the $100 bln brewer’s margins in 2021. After years of zero-based budgets, it needs looser purse strings to revive sales. But with $83 bln of debt, its valuation discount to less profitable rivals will persist.

The $30 bln Aussie fintech champ reported more impressive growth as installment-plan purchases swell. A deal to buy out its U.S. business raises fresh valuation questions, however, as do bigger losses, PayPal’s entry and regulatory concerns. A reckoning for investors awaits.

The U.S. broadcaster’s market value is up by $16 bln since it put a launch date on its streaming service, suggesting the hype enjoyed by Disney and Netflix is contagious. That’s justified if ViacomCBS can hit its subscriber targets, but boss Bob Bakish faces other pressures too.

The ouster of boss Kevin Sneader following a $573 mln opioid bill suggests a firm that peddles advice is struggling with its own direction. McKinsey could consider an IPO. Outside investors are no cure-all, but they can help self-absorbed companies see themselves more clearly.

The two U.S. energy giants have discussed combining. Either one could buy the other at a premium, or they could try a merger of equals. The financial shape of the combined company would be different in each case.

Review: The wild history of the commodities boys

“The World for Sale” offers a virtuoso depiction of the globe’s top oil, food, and metals traders. Javier Blas and Jack Farchy tell of their startling risk appetites, spy novel antics, and geopolitical heft. Still, it’s good that their wings have been increasingly clipped.

Economic crises often see innovation budgets cut. With energy efficiency trends worsening governments must hold the line, urge IRENA’s Francesco La Camera and the IEA’s Fatih Birol. A big chunk of decarbonisation will come from technologies that are still at the prototype phase.

In “How to Avoid a Climate Disaster” the Microsoft founder argues states should throw money at climate change research. Technology will indeed be critical in figuring out how to eliminate carbon emissions. But his book’s main quality is to define the challenge in a graspable way.

Toyota, Ford and GM are all trading at their highest level in years as investors start to pick some winners among traditional automakers. Fear of missing the next Tesla, though, means shareholders are keeping the heady valuations for upstarts like latest SPAC target Lucid Motors.

The biographer of former Japanese Prime Minister Shinzo Abe speaks with Pete Sweeney about the country’s struggles. Harris argues Abe’s successor Yoshihide Suga could push harder on clean energy and economic reform. And if the Olympics get cancelled, most Japanese won’t mind.

Century-old Kikkoman recently served its signature condiment to Mumbaikars as part of a rollout campaign. This latest overseas expansion evokes its post-war U.S. strategy. Despite rampant protectionism, the Japanese company offers a glimpse of the next wave of foreign investment.