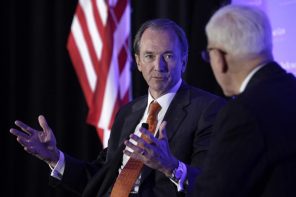 A $911 mln loss on the collapse of family office Archegos barely registered as it landed amid a record quarter for Wall Street equities trading. CEO James Gorman can thank luck and skill. Still, the slip-up validates his strategy of chasing more stable ways of making money.

Shoppers already have two big alt-meat brands to choose from, and soon investors may too. Impossible is a latecomer, but may be less exposed to the supplier risks and sales swings that have troubled its rival. If Beyond’s IPO was a whopper, Impossible’s could be supersized.

Belgium’s KBC may flog most of its $12.3 bln of local assets to Bank of Ireland. NatWest just pulled the plug on Ulster Bank. Tough regulation, large incumbents and low rates played their part. The same factors will push other European lenders to retreat from far-flung markets.

Germany and others plan to make firms liable for human rights and environmental abuses by suppliers. The financial gains derived from outsourcing justify the legal stretch. Scandal-wary giants like Nestlé already self-police their sourcing. Hefty fines are an added incentive.

A slow implosion of the state-owned bad debt manager is spooking foreign funds holding $21 bln of its dollar bonds, and beyond. There has been no official signal as the market convulses. Bail Huarong out or let it default; China erodes investor trust leaving it dangling this way.

The mobile gaming firm’s near-20% plunge on its first day of trading makes it an IPO-market outlier. Applovin is growing, and while it has fierce competition, that was well flagged. Still, even if the IPO game is coming to an end, backer KKR should win either way.

Yoshihide Suga’s visit to D.C., Joe Biden's first in-person confab, is about countering the People's Republic. It’s still politically thorny for the U.S. to rejoin the transpacific trade pact. Once Covid is past, the timing could be better – especially if other allies also join.

The U.S. scientific device maker looks like it is overpaying for PPD given its return on investment will be less than 5% in a few years’ time. But a decade of deals shows PPD’s buyers benefiting from a trend for clinical trials to be outsourced. That may be true again this time.

Surging markets and an improving credit outlook handed Brian Moynihan his best return on equity to date. Yet it’s still half what Jamie Dimon’s bank managed, and their valuations are far apart. Given Bank of America’s conservativism, an economic growth spurt may widen that gap.

The country’s central bank kept its interest rate at 19%. Having replaced his chief rate-setter in March, President Tayyip Erdogan hasn’t yet got the lower borrowing costs he wants. Rising inflation, a weak currency and the loss of credibility mean policy will need to stay tight.

The Italian bank’s new CEO is a veteran rainmaker. But UniCredit’s lowly share price makes M&A difficult and expensive. A hyper-focus on improving the lender’s returns will bolster UniCredit vis-à-vis prospective targets. Andrea Orcel’s best deal is not to rush into one at all.

Concise views on global finance: The Wall Street bank’s communications veteran, Jake Siewert, goes back to the future, sort of; Taiwan is dubbed a forex interventionist but avoids manipulator label.

Review: Blockbuster’s demise had many culprits

The lore is that Netflix killed the video rental chain. “The Last Blockbuster” examines the more nuanced truth through its final store. Reed Hastings’ company played its part, but corporate raiders, bad decisions and heavy debt all drove the once-mighty company into its grave.

Joe Biden’s plan to raise the rate to 28% from 21% would boost Washington’s coffers. For companies and investors, though, it may not matter much over time. In a series of charts, Breakingviews illustrates why. Within reason, America’s tax rate will remain competitive, too.

Real estate tycoons from the former British colony are rushing to build new homes in London. They appeal to Hong Kong residents taking up UK visas, and offer a better return on investment than at home. It’s a bold bet on the capital’s pandemic-afflicted property market.

For businesspeople eager to get back on the road, three lucky Breakingviews editors share their experiences of hopping across the Atlantic, traveling to India and navigating Europe’s arbitrary rules. Asia columnists discuss how Beijing has come down hard on Jack Ma’s tech empire.

What role does the central bank play in combatting climate change? How will it confront the emergence of digital currencies? What if the U.S. economy charges ahead while Europe languishes? Lagarde takes on these questions and more in an exclusive discussion with Breakingviews.

A drive on Mumbai’s pot-holed roads in Tata’s slick Nexon EV brings to life an opportunity that disruptors Tesla, Reliance and Uber rival Ola are all chasing. Incumbents are playing down the potential, but India is set for the fast lane of the battery-powered vehicle revolution.