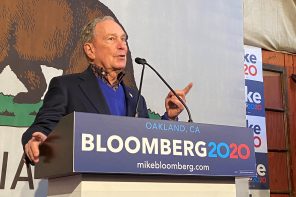 The financial-data mogul’s plan to curb his top clients if he becomes U.S. president preempts criticism he’s too close to them, and his status makes ideas like a transaction tax credible. But Bloomberg probably won’t push it beyond the minimum needed for Democratic acceptance.

The left-wing coalition led by Pedro Sanchez wants to control rents on residential property. The move may depress house prices, up by one-quarter since 2014 thanks to a booming economy. Investors like Steve Schwarzman’s firm may be tempted to take some chips off the table.

Franklin Templeton is acquiring Legg Mason for $4.5 bln. The deal beats the status quo with heavy pressure on industry margins, and both groups’ stocks got a boost. But it’s a defensive move that neither prioritizes aggressive cost cuts nor offers a clear path to growth.

The largest retailer in the United States posted slower-than-expected sales during the critical holiday season. It follows others like Target and Macy’s. Amazon is booming, but Walmart remains a better litmus test for the health of the American consumer.

Noel Quinn is aiming for a return on tangible equity of up to 12% in 2022. He plans to get there by axing $4.5 bln in costs and better allocating capital. For all the upheaval, the shares already imply a similar level of profitability. The main risk now will be missing the mark.

Carlo Messina is taking Italy’s largest bank into an unsolicited takeover of $4 bln rival UBI Banca. It may not be polite but the numbers stack up, with promised cost savings worth several times the premium. The bold move calls other Italian rivals into action.

The commodity giant’s coal operations dragged in 2019. Spinning them off into a separate entity would underline the low-carbon potential of the copper and cobalt assets left behind. That could leave billionaire CEO Ivan Glasenberg with a more valuable overall cake.

The iPhone maker warned quarterly sales would miss earlier guidance as Chinese consumers and supply chains seize up. Corporate caution thus far has been shrugged off in the markets. The tech titan should help inject greater appreciation for the outbreak’s serious ripple effects.

The mining giant delivered a 39% rise in half-year profit, giving a running start to CEO Mike Henry. Since assuming the role on Jan. 1, virus-hit China has threatened iron ore demand. A strategic focus on investing in growth and returning capital to shareholders could be on hold.

The French train maker is paying $6.7 bln for Bombardier’s locomotive unit, after its preferred deal with Siemens was blocked. Bulking up can counter the threat of China’s CRRC. Success hinges on punchy synergies and a green light from the sticky antitrust signal box in Brussels.

The German group has narrowed the field of bidders for its elevator division to two private equity consortia. Trade buyer Kone’s 17 bln euro premium offer is out. Thyssenkrupp insists an IPO remains an option, but its need for a clean, quick deal implies otherwise.

The UK group that oversees $55 bln of assets bought peer Merian for $480 mln. Its shrinking business means CEO Andrew Formica got a good deal. Yet Jupiter will still lack scale in a sector challenged by passive funds. Without more dealmaking, it may become a target too.

The ports and logistics group is buying back a listed stake at a hefty discount. There’s a rationale for doing so, but it will push up leverage. At a time when the emirate is battling a property slowdown, it will also raise the eyebrows of investors who see it as a capital hub.

The country singer made her fortune by becoming a multi-channel commodity spanning theme parks, fashion and TV. In a new podcast series, she explains the benefits of being impartial. Not offending her diverse fans probably made her richer. But it’s getting harder to stay neutral.

The U.S. watchdog wants new rules constraining so-called proxy advisers like Glass Lewis and ISS, which help shareholders vote at annual meetings. Breakingviews explains how comments on the proposals – and who they came from – make a better case for proxy firms than against them.

Rich world is a safer distance from virus fallout

Disruptions to Chinese demand and factories will hurt Japan, Australia and South Korea more than the United States, despite damage done to the likes of Apple and Starbucks. But worst hit will be poor nations that rely more on the People’s Republic for trade, tourists and funding.

Viewsroom: SoftBank in the crosshairs

Activist Elliott is targeting Masayoshi Son’s firm for poor governance and performance. SoftBank could appease the hedge fund by selling investments to finance buybacks. That could include Sprint, whose deal with T-Mobile US just got the nod. Plus: the race for the White House.

We last spoke to the founder of SkyBridge Capital a week before Donald Trump won the U.S. presidential election. When asked if he would take a White House job if Trump won, he said no – unless it was Ambassador to the Vatican. So, when in Rome, Rob Cox sat down with “The Mooch.”

Medical caution helps to limit the spread of infectious disease but for treating the outbreak’s monetary side effects, the best cure may be direct government support. Risky Chinese and China-facing borrowers will suck up cheap credit on an imprudent road to restoring confidence.

Elon Musk’s electric-car maker is now worth $89 bln. That requires some hefty assumptions, not least on annual car sales. Shift the numbers up and down to see how many Tesla needs to deliver to justify its racy valuation.