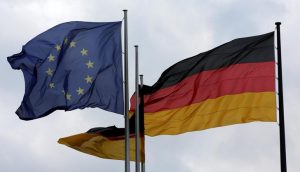 Investors flocked to buy the maiden issue of the bloc’s 800 bln euro joint funding programme. But the yield is higher than Berlin’s, implying it’s not yet Europe’s safest asset. Closing the gap requires more liquidity and a sustained political commitment. Both seem likely.

The Mouse House is rocketing ahead with its video service, Disney+. So it’s odd that it still owns two-thirds of the less successful Hulu. While Disney can buy the rest of Hulu from rival Comcast from 2024, it might make more sense to sell, and spend the money closer to home.

Agitators including Dan Loeb own stakes in the French tycoon’s conglomerate. A messy plan to list most of music label Universal, while selling 10% on the cheap to Bill Ackman’s SPAC, gives them plenty to aim at. But Vincent Bolloré’s near-30% control means he has the upper hand.

The suit maker’s 86-year-old founder, Giorgio, is measuring up prospective buyers, ideally from his native Italy. Despite some pandemic creases, the brand could fetch 8 bln euros. A sale to the Turin dynasty, rather than rivals Prada or Moncler, would preserve more of his legacy.

Macquarie-sponsored Nuix’s CEO and CFO resigned after poor earnings and forecast revisions within six months of taking the Australian software maker public. Blank-cheque deals like Lordstown are known for hype and under-delivery, and now this ordinary listing has managed it too.

Central government crackdowns and the collapse of U.S.-based fund Archegos have delivered selective relief to investors betting against Chinese companies listed in New York. Caution is warranted as outbound investment quotas ease. Patriotic reinforcements are on the way.

Lawmakers have included the power to break up firms like Amazon in one of five bipartisan bills designed to curb tech giants' market heft. It's unlikely to pass. Less onerous plans on data portability and merger fees have a better shot. Watchdogs will be left with blunt weapons.

The electric-pickup-truck maker admitted some pre-orders were nebulous, saw its CEO and CFO step down and warned it may not remain a going concern. This implosion, less than a year after going public, makes it easy for critics and regulators to latch onto specific SPAC problems.

Covid-19 has exacerbated the $2.5 trln industry’s ESG-unfriendly flogging of cheap clothes. Recycling is no more than a partial fix for the problem. Inditex and H&M are insulated by their big family holdings, but Boohoo, Adidas and ASOS look vulnerable to investor attacks.

The Anglo-Dutch driller may sell assets worth $10 bln in Texas. Not so long ago the U.S. Permian Basin was a key oil major growth area, but now Shell is under pressure to cut emissions. Restricting carbon while earning a financial return is increasingly determining strategy.

The Caribbean region has been a shelter from levies for hedge funds and other investment firms. Many of those perks may remain even with a global deal. And caveats – from the UK to Switzerland – suggest that the ambitious multinational plans will be weaker than its headline.

The $265 bln fossil fuel giant’s board upheaval will prompt other drillers to merge higher returns with greener investments. Buying Texas oil ironically could fit that bill. Deals not only offer companies a way to cut costs. Acquisitions can actually help them look greener, too.

The telecom giant ditched its content ambitions, merging assets with Discovery. That has crystalized the amount of value that the new company has to increase before AT&T shareholders can get their money back.

E-book: Art of the SPAC

More than 300 blank-check companies listed already in 2021, and they have struck deals worth nearly $300 bln to buy some 130 targets. It’s a record by miles, but Breakingviews has been on the case for more than a decade. A new e-book tells the story so far, and how it might end.

Short sellers now live in dread that one of their bets, from AMC to GameStop to Wendy’s, will be talked up on WallStreetBets and pounced on by Robinhood day-traders. Many have gone into hiding. But history validates the need to maintain a healthy balance between bulls and bears.

William Rhodes, officemate of the late former Fed chairman, reflects on what the central banker who slew the inflation monster of the 1970s would make of the monetary and fiscal stimulus being pumped into the economy – and inflating asset prices – in the post-Covid recovery.

Blackstone, KKR, Carlyle and other firms are flipping the leveraged buyout playbook with deals that, while less dependent on debt, don’t always add up for their backers. Meanwhile, investment banking is fast becoming the fragrant harbor’s monoculture. Our columnists discuss.

With vaccination programs catching up with America and Britain, Europe is poised to rebound, the former Latvian premier, who is also responsible for an “Economy that Works for People,” tells Rob Cox in an interview hosted by the European-American Chamber of Commerce New York.