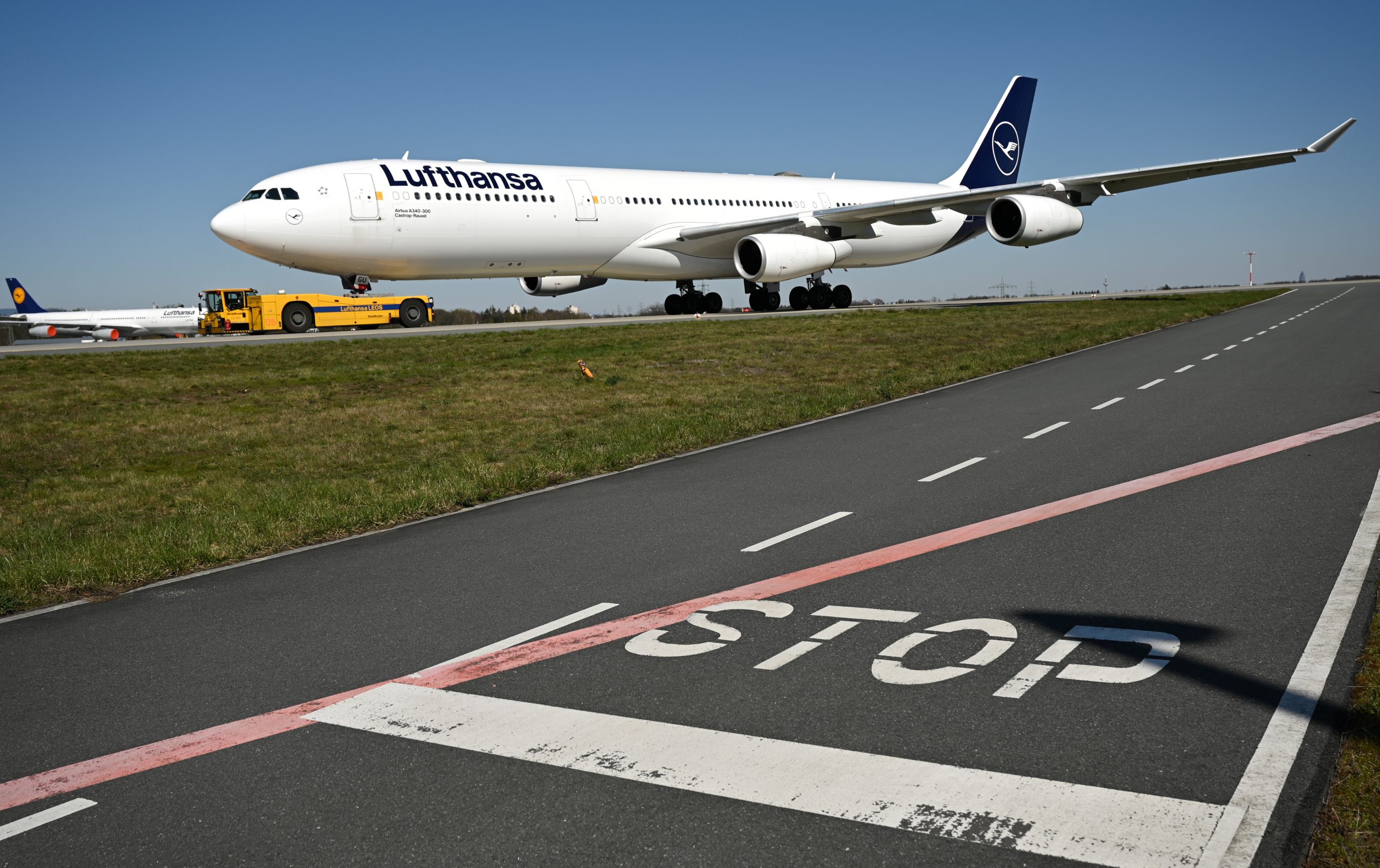 Corona Capital is a daily column updated throughout the day by Breakingviews columnists around the world with short, sharp pandemic-related insights that you might have missed.

There’s no V in Lufthansa. The German airline is culling a portion of its fleet – an admission that demand for air travel will take years to return to pre-coronavirus levels. That’s in marked contrast to previous crises. After the 2003 SARS outbreak, Hong Kong’s Cathay Pacific Airways, the worst-hit carrier, was almost back to normal in three months. Lufthansa’s move means aviation’s hoped-for V-shaped recovery is rapidly becoming more U-like and may even end up as an L.

By decommissioning 42 aircraft, including 20% of its wide-body fleet, the company is accepting it will be a dramatically smaller carrier. That has profound implications for suppliers. The giant Airbus A380 superjumbo and Boeing’s 747 long-haul workhorse were already headed for the scrap-heap due to high running costs. But short-haul crafts like the A320 were not. The 30-billion-euro question is what happens to the 200 aircraft Lufthansa had on order. (By Ed Cropley)

JPMorgan’s fat-fingered near-miss. Investors may be feeling calmer about U.S. bank earnings after the confidence Jamie Dimon exuded in his letter to shareholders on Monday. But imagine their momentary panic after receiving a note later in the day from the bank he runs with a link to first-quarter results that weren’t due for another week.

It isn’t the first time a company, or its third-party provider, has hit send early on earnings. In fact, over the past 15 years the likes of Microsoft, Walt Disney, Google (pre-Alphabet), and Sony Ericsson all committed such boo-boos, sending out their numbers up to a day in advance. JPMorgan made a similar mistake in 2014.

Luckily, JPMorgan’s mistake simply included the wrong words and a link that didn’t work, rather than the numbers themselves. An error brought on by coronavirus-induced stress? There but for the grace of god… (By Antony Currie)

Foursquare checks back in. Remember the app that shot to fame a decade ago for consumers to share locations and win virtual prizes? Far larger social networks like Facebook and Twitter drowned it out. Privately owned Foursquare, co-founded by Dennis Crowley, is still around, though focuses on helping advertisers find customers based on where they are. Now it’s making some noise merging with rival Factual.

The two are small, with $150 million of combined revenue last year. If valued on the same multiple as some of their larger peers, Foursquare-Factual would be worth less than $1 billion. Even that may be a stretch for a while. After all, location-based advertising loses virtually all appeal in a near-nationwide pandemic-enforced lockdown. (By Robert Cyran)

The chic of it. Designer Kurt Geiger is gifting 5 million pounds of fashion to British health workers. The brand is aiming to get at least 1,000 pairs of shoes to the National Health Service frontline every week. Chief Executive Neil Clifford, who suspended his salary until shops reopen, said the chain can’t make significant financial donations. But high heels are probably not the accessories dedicated hospital staff need amid a shortage of life-saving protective equipment.

Still, the move allows owner Cinven to stay out of the private equity sin bin. Thanks to help from its bank, Lloyds Banking, Kurt Geiger says it’s continuing to pay its employees while stores are closed. This will eat into the buyout fund’s returns, particularly as its four years holding the asset are likely to be extended. Cinven is setting other buyout barons a stylish example to follow. (By Dasha Afanasieva)

American Dream is lost. The developers behind New Jersey’s mega-mall are shifting the retail footprint mix even further amid the coronavirus. Originally, 45% of American Dream’s square footage was to be dedicated to retailers like Saks Fifth Avenue. Owners Triple Five reduced that to 30%. American Dream’s part-launch was bold to begin with but now looks especially troubled. Shoppers may find they’re more drawn to experiences as they emerge from quarantine, rather than just destination buying, especially as online buying habits are cemented.

But that pits American Dream against Walt Disney and Six Flags Entertainment theme parks. American Dream will need to live up to its billing as a destination attracting people globally to its SpongeBob-themed roller-coaster, ski slope and water park. That’s a costly mission with no guarantee of success. Triple Five may be better off repurposing some of that space to warehouse or ventilator factory. (By Jen Saba)

Undeserving. Luxury mega-brands like LVMH and Kering, owned by two of France’s richest men, are bracing for a whopping Covid-19 hit. With stores closed across the United States and Europe, Goldman Sachs expects sector sales to contract 30% in 2020. That’s three times as bad as in 2009. But it still doesn’t give the duo an excuse to rein in costs by tapping state-backed job support schemes in countries like France, as a report by the Financial Times suggested they were tempted to do.

Years of strong cash flow have helped bling players build strong balance sheets, with average net debt below one year’s EBITDA. Moncler, Kering and Richemont have more than 10 months of liquidity to cover the current cash burn, say RBC analysts. And the sector should experience a 15% sales bounceback in 2021, Goldman reckons. State support should be limited to the genuinely vulnerable. (By Lisa Jucca)

Final cut. A horror movie is unfolding for cinema chains. British operator Cineworld on Tuesday said it had closed all its theatres because of the coronavirus and suspended its dividend. AMC Entertainment, the world’s biggest, hopes to reopen U.S. stores for the summer but with blockbusters like the latest instalment of James Bond delayed, theatres are going to find it harder to drive sales. Following bouts of major M&A, chains are typically highly leveraged: AMC had net debt of 6 times EBITDA last year.

The industry can’t rule out a scary sequel. The Covid-19 villain can make a comeback and the growing trend of watching films at home will keep bums away from movie theatre seats. In the United Kingdom, total cinema revenue fell last year. Chains should be afraid, very afraid. (By Dasha Afanasieva)

Too good to be true? Even before coronavirus grounded fleets worldwide, Malaysia Airlines was an indebted, bloated Asian state carrier looking for a buyer. So a $2.5 billion offer to take the airline off the hands of sovereign fund Khazanah Nasional Berhad looks incredibly fortuitous. The potential buyers are privately held Golden Skies Ventures, comprised of former airline officials and aviation experts. They told Reuters they wanted to reinvent the airline as a premium long-haul operator and were even willing to let the government keep its golden share.

A promise to retain all 13,000 frontline employees and not strip out assets will also be music to Kuala Lumpur’s ears. How that will help the airline generate positive EBITDA within three years remains to be seen. At a time of unprecedented crisis, global aviation needs a few rosy horizons to aim at. But rosiness has its limits. (By Una Galani)

An airplane of German carrier Lufthansa is towed to be parked at the North West runway as air traffic is affected by the spread of the coronavirus disease (COVID-19), in Frankfurt, Germany, March 23, 2020.