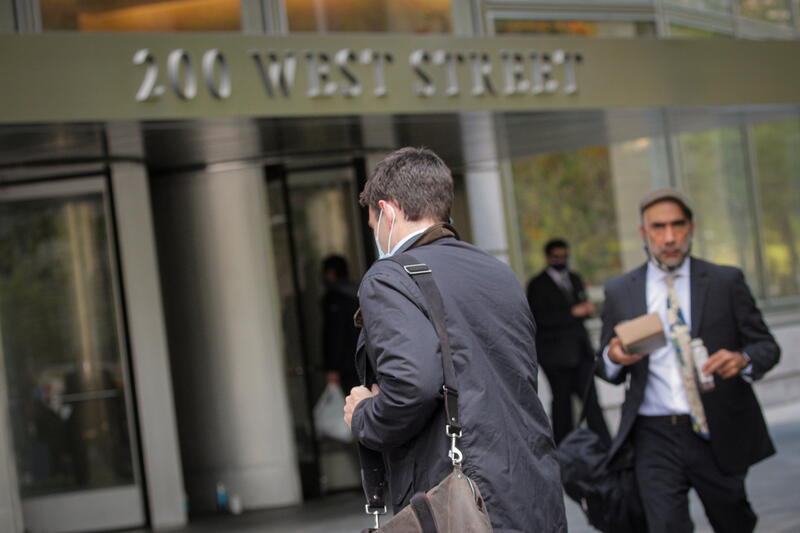 The scene outside Goldman Sachs’ Manhattan headquarters at 8:30 a.m. a week ago was like the start of the academic year on a university campus. Smiling security personnel greeted workers at 200 West Street as they streamed through the turnstiles. A few staffers, apparently unaccustomed to the rituals of office life after more than a year of working from home, had forgotten their badges. Queues formed at the elevator banks.

Uptown at Morgan Stanley was similar. So were the headquarters of BlackRock and Blackstone, two of the world’s biggest fund managers. Wall Street is back, and it’s booming. Pipelines, as bankers like to call their predictions for future work, are bulging with mergers and acquisitions, stock offerings, debt sales, leveraged buyouts and more. As the chief executive of one firm put it: “If you are not making money in this market you should not be in this business.”

That was the widely-embraced view from global finance’s epicenter. For the better part of a year, corporations fixated on stabilizing their enterprises and, perhaps to a lesser degree, looking after their employees. Investors focused on ensuring their portfolios were resilient to the impact of Covid-19 on economies and markets. But with vaccinations kicking in and masks cast off, there’s a palpable urgency to make up for lost time.

What’s happening in New York City today will likely be mimicked in financial centers across the world in the coming year or two. True, the U.S. economy is in healthier shape, and more flush with capital, than developed peers in Europe and Asia. And emerging markets are lagging largely due to a lack of access to vaccinations. But many of the trends driving Wall Street activity today are global and, barring a virus variant reprise, unlikely to dissipate anytime soon.

Start with psychology, or what Keynes called “animal spirits.” For much of 2020, executives and boards of directors were necessarily inward focused. Many industries – retail, airlines, live entertainment, lodging and hospitality, among them – stared at the abyss. They had to hunker down and raise capital, a chunk of it from government sources, to keep the lights on and avoid large-scale layoffs. They are now emerging, and in some cases, as my colleague Lauren Silva Laughlin argued, are leaner and meaner.

Having faced existential questions about their operations, many corporate leaders are now determined to build scale and greater resiliency. That means buying rivals or technology. Many also recognized the liabilities associated with non-core assets, for which they will need investment bankers to create pitchbooks and sales processes for in coming months.

And they have money to spend. In each of the four quarters since the pandemic started, companies sold more than $300 billion of stock – a level not seen since the end of the financial crisis – for a total of $1.3 trillion, according to Refinitiv. That’s almost double what had been raised in the previous four quarters. Much of that money is sitting on company balance sheets waiting to be deployed.

Yet it’s a drop in the bucket against the firepower of private equity firms, which were also forced during the height of the pandemic to focus on companies they already had in their portfolios. But in the first quarter, they raised 15% more than in the months before Covid-19 hit and are now sitting on a record $1.6 trillion in dry powder. Preqin, a research firm, says this is putting increasing pressure on deal makers to identify investment opportunities quickly as the recovery picks up.

Uppity investors are also retooling their cage-rattling devices. Companies were encouraged by governments and regulators to marshal cash and avoid large-scale layoffs while hospitals were brimming with intubated patients and morgues filled with the dead. As a matter of decorum, activists went into hiding: It would have been unseemly to demand stock buybacks and “change management” programs. Those gloves are coming off, with aggressive campaigns surfacing already to oust chief executives, like Danone’s, in recent months. Activists are important catalysts for the assessment of “strategic options” like a sale or asset divestment.

All this money comes in addition, or thanks, to the monetary stimulus that central banks have pumped into the economy. The Federal Reserve, European Central Bank, Bank of Japan and Bank of England added nearly $10 trillion to their balance sheets since the end of 2019. That propelled asset prices into new records and fueled securities trading. Governments are doing their part, too. NextGenerationEU is Europe’s 807 billion euros fiscal recovery plan. U.S. President Joe Biden reached a bipartisan $600 billion infrastructure spending plan with senators last week.

Even some potential risks to the boom have silver linings. Take the potential increase in capital gains taxes that the Biden administration wants. Blackstone founder Steve Schwarzman last week said the move would create an avalanche of opportunities by fueling exits by entrepreneurs seeking to avoid paying the extra 15% or so under Biden’s proposal. It appears to have motivated the Mills family to sell Medline Industries, to Blackstone, Carlyle and Hellman & Friedman, for $34 billion a few weeks ago, in one of the largest LBOs for a decade.

Whether all this frenzied dealmaking will turn out well for investors is another story. Haste makes waste, and it’s hard to see how this rush to spend money will be any different. But after a bout with plague, humanity can be forgiven for going a little crazy.