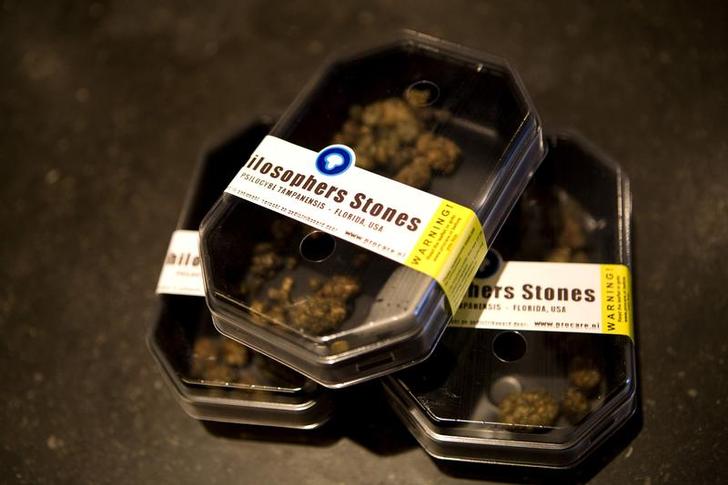 Connoisseurs of magic mushrooms can attest to the power of psilocybin, the psychoactive ingredient of these funky fungi. Bad or good, they say, the experience is always intense. Whether investor Peter Thiel has had first-hand experience is of little import. The Donald Trump-supporting entrepreneur who made billions from Facebook is, nonetheless, determined to make another small fortune by convincing depressed people that ’shrooms will help them.

A company in which he’s an early-stage investor, Compass Pathways, is aiming to raise $107 million in an initial public offering on the Nasdaq, valuing it at just over half a billion dollars. Its husband-and-wife founders, George Goldsmith and Ekaterina Malievskaia, describe Compass “as an ‘involuntary start-up’, something that had to be created because the world is in a mental health crisis and there has to be a way to deliver better outcomes for more people.”

Amen to that: some 320 million people in the world suffer from depression – and that’s before considering the damage Covid-19 and its concomitant lockdowns have rendered. What’s more, nearly a third of them don’t respond to traditional pharmacological and other treatments. By the Compass founders’ reckoning, the cost of treating mental illness, and resulting loss of productivity, is more than $200 billion annually just in the United States. That, the investment thesis goes, is the total addressable market in which Compass can frolic.

The company has a great backstory, with roots in the serendipitous invention of lysergic acid diethylamide by the Swiss chemist Albert Hofmann at Sandoz in 1938 through to Timothy Leary’s Harvard Psilocybin Project in the early 1960s. Leary, whom Richard Nixon deemed the “most dangerous man in America”, upended proper studies of the potential benefits of psychedelics after he was thrown out of Harvard for his unorthodox – some might say hedonistic – approach to research. The classification of LSD and its trippy cousins as Schedule 1 substances in 1970 relegated them to recreational use.

Psychedelics are now seen as a potential avenue for new therapeutic discoveries in the treatment of mental illness. Money is pouring into the sector, with Thiel and Atai Life Sciences backing Compass. Another firm focused on using ibogaine to help patients with opioid addiction, Mind Medicine, listed in Toronto in March with backers including Bruce Linton, the founder of cannabis-biggie Canopy Growth and “Shark Tank” TV host Kevin O’Leary.

Regulatory filings for Compass offer a door into these shifting perceptions. Compass was originally established as a non-profit after its co-founders struggled to find a treatment for a son whose depression put him at risk of suicide. They had spent more than $300,000 on various therapies, but the more they treated him the worse he got, Malievskaia explained in a 2018 “After On” podcast. “In the end we arrived at the conclusion, ‘do we believe the science or the American news from the 1960s?’ We had to go with the science.”

Compass has developed a crystalline formulation of psilocybin called COMP360, which could lead to “rapid reductions in depression symptoms and effects lasting up to six months, after administration of a single high dose,” it says. COMP360 forms part of an overall treatment, including a six-to-eight-hour session under its influence, with support from specially trained therapists.

Patients wear eye visors and listen to music designed to accompany the various stages of the drug’s effects. It’s preceded and followed by sessions with the therapists “to help patients process the range of emotional and physical experiences,” according to the prospectus. Early-stage trials have shown promise in helping some patients.

The problem is that Compass, as an investment, is highly speculative. The risk factors in its IPO prospectus are like a bad trip. Only in a raging bull market for risky assets, where the suspension of disbelief among investors is borderline delirious, does a firm like Compass raise cash.

As an early-stage biotechnology company, with no approved product to sell, Compass loses money – $62 million since inception. It has $68 million of cash to get through the next 12 months, but expects “to continue to generate operating losses for the foreseeable future.” Given that it can cost more than $1 billion to get a drug through U.S. Food and Drug Administration trials and other hoops, an investor in the IPO today needs to prepare for further calls on their cash.

Then there are the legal and stigmatic hurdles. Ever since Leary and his merry pranksters were booted from Harvard and moved on to Zihuatanejo, Mexico and then Millbrook, New York, research into psychedelics has been frowned on by many scientists. Their illegal nature kept them off limits to Big Pharma. For COMP360 to be made available commercially in the United States, “legislative or administrative action” may be required, Compass warns.

Compass is also still assessing the impact of the pandemic. While the coronavirus has made more people depressed, it has also made it more difficult to get them into a room for eight hours with a therapist. There are other risk factors, including the prospect of significant dilution based on the previous sale of convertible securities.

Make no mistake, Compass is a risky company. But at a moment when investors are throwing money at special purpose acquisition vehicles ($36 billion and counting this year) – shells attached to investors with track records who command significant fees – there’s a case to be made for betting on it.

Unlike a SPAC, Compass knows what it wants to be when it grows up. And, like SPACs designed to allow investors to ride the coat-tails of fund managers, private equity barons and even politicians, the Compass team is full of pharma-world all-stars. Its board includes a former head of the European Medicines Agency, for instance. And its scientific advisory includes neuroscience and psychiatric experts from Harvard, Stanford, Imperial College and Johns Hopkins.

Like any biotech investment, Compass doesn’t have a requirement to hand back unspent cash, or any other checks on invested capital akin to those common at most SPACs. To a far larger extent, it’s a roll of the dice. But one with a purpose. For investors curious about the potential for psychedelics to make the world a happier, more productive place, Compass could be a trip worth taking.

Boxes containing magic mushrooms sit on a counter at a coffee and smart shop in Rotterdam November 28, 2008.