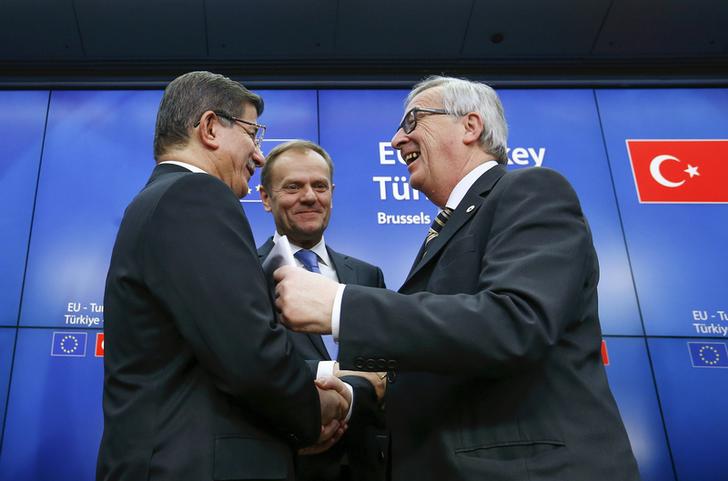 The European Union’s bold deal with Turkey to stop the disorderly flow of migrants to Europe offers a lot – if it sticks.

Not only would it help keep Britain in the EU and Greece in the euro. It would shore up German Chancellor Angela Merkel’s position, and so help stabilise the EU. It would also avoid the collapse of the Schengen Area, which allows border-free travel throughout most of the bloc.

The provisional deal, which emerged on March 8, is more extensive than originally envisaged. Turkey will take back any “irregular migrants” crossing to Greece, including Syrian refugees. In return, the EU will accept an equal number of Syrians to those who come to Greece but are then sent back to Turkey.

Critically, these will not be the same people who attempt the boat trip across the Aegean. Instead, refugees will be taken directly from Turkey in a more orderly process. This should cut the incentive for people to make the dangerous crossing, putting their lives in the hands of people-smugglers.

Turkey also will get a series of other goodies: visa-free travel for its citizens to come to the Schengen Area from the end of June; extra cash on top of the 3 billion euros so far promised so it can better look after the millions of refugees who will stay in Turkey; and the energisation of talks to admit the country to the EU.

A lot of detail needs to be filled in. In particular, it is unclear how Syrians who are brought to the EU in an orderly fashion will be divvied up between the different members of the bloc. Given that several countries won’t want to take any – or at least not many – bitter wrangling could yet cause the deal to fall apart.

Meanwhile, right-wing nationalists won’t be happy with either visa-free travel for 79 million Turks, many of whom are Muslim, or the possibility that the country will eventually join the EU – even though that still seems a remote prospect that may never materialise. Nevertheless, movements such as France’s Front National and Germany’s Alternative für Deutschland will have new sticks with which to beat their nationalist drums.

That said, if the deal is finalised, perhaps as soon as another summit on March 17, there will be important economic and financial benefits.

First, the perception that the EU is finally getting a grip on the migrant crisis will undermine one of the strongest arguments used by those campaigning for Britain to quit the EU in a referendum set for June 23. Insofar as the Brexit risk is cut, that will reduce one of the main current concerns in financial markets. The UK is a big winner from the mooted deal because it has opted out of most of the EU’s migration policies and so won’t be required to take a quota of refugees. And since it is not in the Schengen Area, the offer of visa-free travel to Turks won’t impact it.

Another big winner would be Greece. It has been at risk of being turned into a giant refugee camp as other countries north of it have tightened border controls. The political fallout could in turn have exacerbated its economic crisis. Even with this deal, Greece will face multiple difficulties, but there’s less risk of them spinning out of control and tipping the country out of the euro.

Merkel also would be a winner. She has taken a lot of heat at home in the past few months for her previous open-door approach to Syrian refugees. If she can now show things are coming under control, she may be able to restore her authority. That would be good for the stability of the EU in general, given that she is its most important leader.

The EU and its member states would, of course, face a financial cost. In addition to the money sent to Turkey, Greece would get cash to help manage the refugees on its territory. An even bigger cost would be looking after refugees settled in the EU as part of the orderly process.

Set against that, borders would no longer need to be erected in the Schengen Area. Such a scenario would gum up trade and tourism. The cost of that could be 100 billion euros a year by 2025, according to analysis by the French government. And, eventually, Syrian refugees could play a valuable role in the economies of the countries where they settle – although it remains to be seen how well those who come will integrate in their new homes.

There are of course many ifs and buts in this scenario. Some people also will rightly worry that the EU is turning a blind eye to Turkey’s abuse of press freedom and rule of law in its desperation to cut a deal on migrants. Nevertheless, from an economic perspective, the provisional deal reached in the early hours of March 8 has much to offer.

Hugo Dixon is chairman of InFacts, a journalistic enterprise arguing that Britain should stay in the EU.

European Union leaders welcomed Turkey’s offer on March 7 to take back all migrants who cross into Europe from its soil and agreed in principle to Ankara’s demands for more money, faster EU membership talks and quicker visa-free travel in return.

However, key details remained to be worked out and the 28 leaders ordered more work by officials with a view to reaching an ambitious package deal with Turkey at their next scheduled summit on March 17-18.

German Chancellor Angela Merkel and British Prime Minister David Cameron among others hailed the surprise Turkish proposal at an emergency summit in Brussels as a potential breakthrough in Europe’s politically toxic migration crisis.

European Union leaders welcomed Turkey’s offer on March 7 to take back all migrants who cross into Europe from its soil and agreed in principle to Ankara’s demands for more money, faster EU membership talks and quicker visa-free travel in return.

However, key details remained to be worked out and the 28 leaders ordered more work by officials with a view to reaching an ambitious package deal with Turkey at their next scheduled summit on March 17-18.

German Chancellor Angela Merkel and British Prime Minister David Cameron among others hailed the surprise Turkish proposal at an emergency summit in Brussels as a potential breakthrough in Europe’s politically toxic migration crisis.