How to stop Grexit 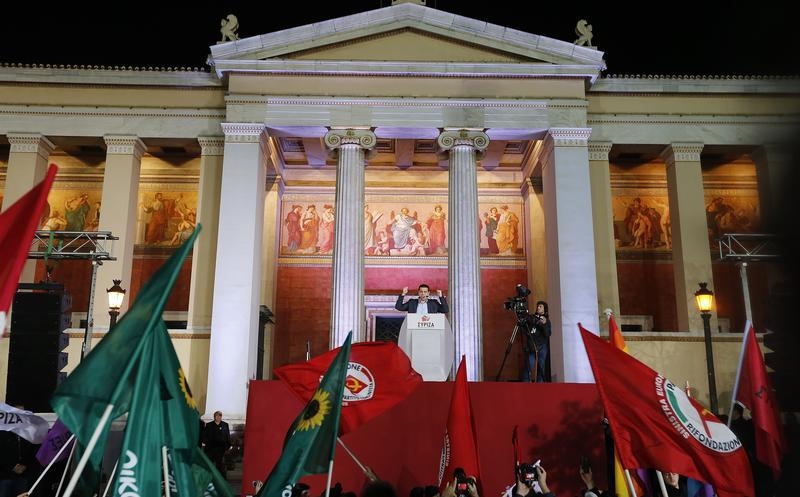 Syriza’s resounding election victory has pushed Greece closer to quitting the euro zone. But a so-called Grexit is still not the most probable outcome, as the radical left group should be able to cut a deal with its European creditors to avoid bankruptcy provided both sides show maturity.

Alexis Tsipras, Syriza’s leader, has made a host of promises that he will not be able to deliver while sticking within the constraints of the country’s mega bailout programme. He wants to increase pensions and the minimum wage sharply, hire back sacked civil servants, reverse the liberalisation of the labour market and cut Athens’ vast debts to other euro zone countries.

The problem is that Greece’s creditors, led by Germany, are not prepared to keep lending Athens money if it does not make further progress in reforming its economy and balancing its budget.

If everyone was rational, there would be scope for a compromise. After all, a large majority of the Greeks want to stay in the euro. They rightly fear that quitting it might lead to a downward spiral, in which impoverishment and political strife fuel one another.

Meanwhile, no head of government in the other euro countries wants Greece to leave. This would be a huge political failure, with the risk that Athens could also quit the European Union and maybe even drift into Russia’s sphere of influence. Despite the many measures taken to shore up other euro countries in recent years, there is also still a possibility of contagion. A Grexit would be such a unique event that nobody really knows where the chain reaction would lead.

The good news is that Tsipras’ victory speech was reasonably conciliatory. The bad news is that the Syriza leader seems likely to choose the Independent Greeks, a right-wing anti-bailout party, as his partner.

His next priority should be to ask for an extension of the bailout programme, which runs out at the end of February. If he does that, the European Central Bank will continue to provide liquidity to Greece’s banks. That’s important because deposits have been fleeing the banking system in the past week.

For their part, the other euro zone countries should agree to extend the programme for several months if Tsipras asks nicely so that there can be a proper discussion on a new deal. It would not be right to bring the banking system crashing down on a newly elected leader’s head.

The other leaders should also accept Tsipras’ request for a high level meeting to discuss his plans rather than force him to deal immediately with the officials from the Troika – the European Commission, the ECB and the International Monetary Fund. The Troika will have to be involved eventually, but it would be a red rag to a bull to insist on it being involved prominently from the start given how hated it is in Greece.

Such emollience should, though, be conditional on Tsipras himself not doing anything inflammatory before the leaders meet. He should not, for example, try to create a fait accompli by pushing through a hike in the minimum wage. Such things should be left to the negotiation.

It is also important that, once in office, Syriza avoids the fiery rhetoric it used during the campaign. Yanis Varoufakis, who is tipped to be finance minister, needs to watch his tongue. He was recently quoted by a French newspaper to the effect that Jean-Claude Trichet, the former ECB boss, would burn in hell. This is not the way to win friends and influence people.

Beyond that, there is the making of a deal on the long-term debt. Syriza is now indicating that it will not ask for a haircut, but will instead propose linking its debt servicing to how rapidly the Greek economy grows. The European countries, meanwhile, are suggesting they could extend the amount of time Athens has to repay its loans.

The snag is that long-term debt relief is not the only issue. The state will run out of cash in March when a big dollop of IMF money comes due. The best solution would be to let the government sell some more treasury bills to the country’s banks provided it commits itself to serious negotiations.

That will not, however, solve the medium-term liquidity problem which comes to a head in June when a series of bonds owned by the ECB need to be repaid. It is hard to see how Athens can avoid default then without borrowing more money from the euro countries – and they won’t agree to that unless Syriza commits to reform the economy and fill a hole in this year’s budget.

Syriza has promised to crack down on the oligarchs who have a stranglehold on swathes of the economy as well as pursuing tax evasion. If Tsipras shows he means business in this area, he will find some favour with other European leaders. The problem is that he will get their hackles up if he insists on unwinding reforms to the labour market – one of the few areas where there has been good progress in recent years.

Equally problematic will be how to handle this year’s budget. The outgoing government wasn’t able to agree this with its creditors. Syriza will face an even tougher task as tax receipts have dropped off in the run-up to the election. Tsipras has been elected on a mandate to boost public spending, not cut it.

Yet even here there could be scope for compromise. If Tsipras shows goodwill in other areas, the Europeans could make a one-off grant this year to deal with extreme poverty. And, for future years, they could agree that Greece wouldn’t have to run quite such a big budget surplus as currently planned.

So there might be a way of cutting a deal. The snag is that doing so would involve a massive somersault – or what Greeks call a “kolotoumba”. Many of Tsipras’ backers would then accuse him of betraying their cause. It is still far from clear whether he is prepared to do that.

But if the Syriza leader is not prepared to compromise, Greece will default and will have to impose capital controls to stop the banks collapsing. If the people then forced the government to backtrack, there would be one final chance to stay in the euro. Otherwise, the drachma would beckon.

Greek leftist leader Alexis Tsipras promised on Sunday that five years of austerity, “humiliation and suffering” imposed by international creditors were over after his Syriza party swept to victory in a snap election on Sunday.

With about 92 percent of votes counted, Syriza was set to win 149 seats in the 300 seat parliament, with 36.3 percent of the vote, 8.5 points ahead of the conservative New Democracy party of Prime Minister Antonis Samaras.

Greek leftist leader Alexis Tsipras promised on Sunday that five years of austerity, “humiliation and suffering” imposed by international creditors were over after his Syriza party swept to victory in a snap election on Sunday.

With about 92 percent of votes counted, Syriza was set to win 149 seats in the 300 seat parliament, with 36.3 percent of the vote, 8.5 points ahead of the conservative New Democracy party of Prime Minister Antonis Samaras.