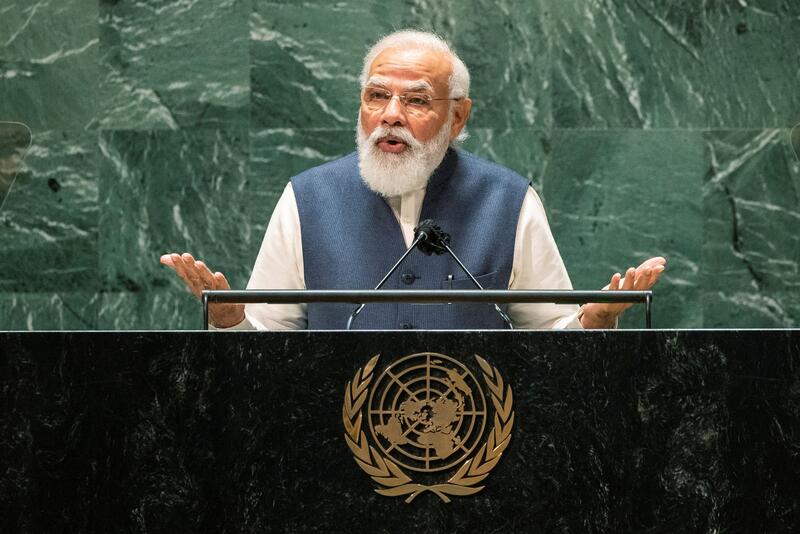 India is part of the global climate solution, not just part of a dirty problem to be fixed. That’s the grand message Prime Minister Narendra Modi might prefer to emphasise when he attends the United Nations Climate Change Conference, also known as COP26, that kicks off in Glasgow at the end of the month.

The rich world is piling pressure on the third-largest polluter to set a deadline to take its carbon emissions to net zero, a target the United States has pencilled in for no later than 2050 and China for a decade later. Modi’s administration may instead focus on fulfilling the nearer-term goal countries committed to in the 2015 Paris agreement of improving their initial 2030 targets. For India, that involves further reducing the emissions intensity of its $3 trillion economy.

As a developing country relying on coal to meet about half of its primary energy demand, India is in a tricky spot. Its emissions intensity is higher than most large countries and the increase in the carbon it will pour into the atmosphere through to 2040 is set to exceed all of Europe’s planned reductions over the same period. Net zero requires India to commit to cut not just those existing pollutants but also ones from power plants, industry, vehicles and air conditioners that its economy and population need but do not yet have.

In an ideal world, New Delhi wants rich countries to bring down their average per capita emissions faster so poorer countries can continue to lift living standards without warming the planet. To match China’s level, India would need to more than triple its per capita emissions, and roughly quintuple them to be on a par with the United States.

To solve for the worst part of India’s existing problem, the country would require external financial support. One estimate from the Climate Policy Initiative reckons it will cost $41 billion to decommission just 14% of the installed capacity of its oldest, dirtiest coal plants and replace them with renewable energy capacity. That’s almost one tenth of India’s annual budget for the year to March 2022 and almost as much as what India spends on defence.

High costs help to explain India’s wariness of net-zero goals. One concern is that it will become a self-defeating process: If every country sets such a target, there’s a risk that developed countries will have less incentive to help fund retiring coal plants in developing countries, whether using carbon credits or a clean-development finance mechanism.

Tackling coal would also require Modi to spend a lot of political and financial capital beyond just shutting down the plants. Coal India, the country’s top miner, directly employs about 260,000, and millions more depend on the sector. Coal generates precious revenue for poor states like Jharkhand. Freight charges, including for coal, subsidise passenger services on the creaking Indian Railways, whose 1.3 million staff make it one of the nation’s top employers. Replacing these various income sources will be a gargantuan task.

Elsewhere, India can lay serious claim to being a responsible climate citizen. It’s championing the moon-shot idea of a global solar-powered grid and there’s plenty of private capital sloshing around to ensure its own growing energy needs are met greenly.

Indeed, while coal demand is still growing, it is a shrinking part of the overall picture. The country is already meeting most of its incremental power demand with renewables. Factoring in Modi’s target to have non-fossil-fuel power 40% of electricity by 2040, emerging industries and transportation will be the main reason for the country’s increase in emissions over the period.

Big investments from tycoons including Gautam Adani and SoftBank’s Masayoshi Son have helped to make Indian solar power among the cheapest in the world: tariffs in some auctions have fallen below 2 Indian rupees ($0.0266) per kilowatt hour. But large-scale, long-duration storage solutions are a prerequisite to get more clean energy reliably, consistently and economically into the country’s grid. Achieving that will make it more attractive for industry to give up their captive dirty power plants, join a greener grid, and create a market for Modi’s targeted 450 gigawatts of installed renewables capacity by 2030. That target is already 16% higher than India’s total installed capacity from all sources, which includes about 150 gigawatts of renewables and hydro power.

To fix such problems, Indian companies aren’t waiting for battery kings like Tesla’s Elon Musk and others to come up with solutions. An eye-catching winning bid came in earlier this month from Hyderabad-based Greenko, a top Asian issuer of green bonds. It offered to supply round-the-clock energy on a one-gigawatt project at a price cheaper than coal and gas equivalents, even after factoring in the costs required for the sovereign wealth fund-backed company to deploy a 19th century-inspired hydro-pumped storage solution.

Like China’s President Xi Jinping, Modi is setting an ambitious green agenda because it is also a path to self-sufficiency. India’s bill for importing oil, gas and coal is expected to triple to $326 billion by 2040 and volatile prices threaten its energy security. Developing low-carbon solutions also supports the prime minister’s long-held goal to turn India into a manufacturing hub to reduce dependency on Chinese imports and to create domestic jobs. For example, New Delhi is offering sales-based incentives for companies to build batteries to power its nascent electric-vehicle revolution.

There are firm push factors too. The prospect that the European Union will impose border taxes on carbon-intensive imports is forcing India’s emissions-intensive commodity exporters from Tata Steel to Vedanta to Hindalco to think about how to urgently clean up their act. And, on a human level, Indians are already feeling the pointy end of climate change in extreme weather events that are especially damaging for agriculture, a sector half the workforce depends upon.

India’s richest men, including Mukesh Ambani who runs the $230 billion Reliance Industries, are aiming even higher. They see an opportunity to use the country’s cheap solar to make low-cost green hydrogen. That would help substitute imports, and ultimately provide a resource that could be sold overseas, turning India from a net energy importer to exporter.

Such technologies are still evolving and it may turn out that tycoons are flying close to the sun. But India’s cheap labour could give it an edge over rivals: Australia’s Andrew “Twiggy” Forrest, is eyeing a similar strategy for his $33 billion mining company Fortescue Metals. Customers for green hydrogen might include Singapore, South Korea, Japan; smaller countries that lack the space or right weather to produce their own clean fuel to decarbonise.

Coal will remain the elephant in the room, but Modi has some key fundamentals on his side to help smooth a global climate transition.

India is looking for consensus on unresolved issues concerning long-term climate finance, among other things, at the United Nations Climate Change Conference, known as COP26, which starts in Glasgow later this month, the country’s environment minister Bhupender Yadav said on Oct. 22. A day earlier, Yadav told Reuters that Prime Minister Narendra Modi will attend the summit.

India is looking for consensus on unresolved issues concerning long-term climate finance, among other things, at the United Nations Climate Change Conference, known as COP26, which starts in Glasgow later this month, the country’s environment minister Bhupender Yadav said on Oct. 22. A day earlier, Yadav told Reuters that Prime Minister Narendra Modi will attend the summit.