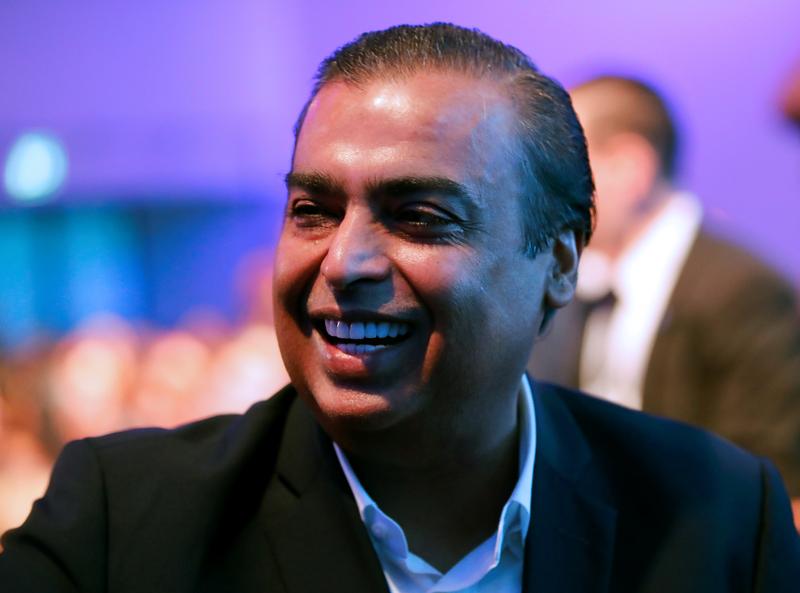 Mukesh Ambani could shop until his rivals drop. After upending India’s telecoms industry by building an upstart data network into the world’s largest, the energy billionaire wants to redefine how Indians buy things. It pits him against Jeff Bezos’ e-commerce giant Amazon, Walmart’s Flipkart – newly acquired at a valuation of $21 billion – and Chinese behemoth Alibaba. Past success and the deep pockets provided by a cash-cow oil business make Ambani a serious competitor.

At this month’s annual general meeting of his $95 billion Reliance Industries in Mumbai, Ambani set a target of generating nearly half the group’s EBITDA from consumer businesses within a decade, up from around 13 percent today. Held in an auditorium packed with adoring employees and shareholders, these days his yearly presentation has a flavour of former Apple boss Steve Jobs’ iPhone launch appearances.

Ambani only has to look at the list of the world’s most valuable companies to know that consumer-facing technology has overtaken Big Oil. And his Jio mobile network shows he’s not afraid to wade into others’ territory with a new model. Reliance has spent over $30 billion rolling out the giant 4G network across India. In almost two years since its launch, Jio has won over 215 million subscribers. A brutal price war has brought rivals to their knees, including Reliance Communications, run by Ambani’s younger brother Anil. Even global giant Vodafone was forced last year to agree to merge its Indian business with a competitor.

Ambani now envisions rolling out broadband fibre and taking a digital, immersive shopping experience to Indians on their mobiles or large screens in their smart homes using, in his words, “augmented reality, holographic technology, and VR devices”. He wants to create a so-called “hybrid online-to-offline” platform that connects customers to the nation’s small shopkeepers. Reliance is already dabbling in Jio-branded payments and cloud services, and it is a big owner of news, movies and music. The motto is “to connect everyone and everything, everywhere”.

The challenge is daunting. Amazon says it already offers 170 million products and serves every one of India Post’s many thousand numbered delivery districts, including mountainous villages. Bezos wants to do more, and he has committed at least $5.5 billion to the country. Meanwhile Flipkart – the creation of two Indian Amazon alumni – now has U.S. grocery leader Walmart’s muscle behind it. And Alibaba and Masayoshi Son’s SoftBank have thrown money behind the smaller Paytm Mall. Even among these strong rivals, history elsewhere suggests the various models will probably converge and consolidate over time.

Yet, the opportunity is also huge. There is great demand for convenience given the infrastructure challenges that make buying everyday items a struggle. India’s population, currently 1.3 billion, will overtake that of China by around 2024, according to the United Nations. The IMF forecasts economic growth at between 7 percent and 8 percent in the coming years. And even now, e-commerce accounts for barely 3 percent of the $860 billion retail market, excluding travel and tourism, Madhur Singhal of Praxis Global Alliance reckons.

Some investors hope India will be the next China, spawning local versions of Jack Ma’s $500 billion Alibaba. Maybe so, but not yet. India might only lag the People’s Republic by about four to five years in terms of smartphone penetration, according to Counterpoint Research. That’s important because local consumers primarily use mobile devices for shopping. On an average per-capita income basis, though, India could be as far as 17 years behind, according to Morgan Stanley estimates.

Ambani has some potential advantages as Reliance steps into this landscape. With a mobile operator, Jio-branded handsets, and a fast-growing retail network comprised of 7,500 stores selling everything from digital goods to fashion and groceries, he can already collect useful data on consumer habits. That could give him an edge.

Also in the tycoon’s favour is his nationality. India has proved receptive to foreign capital. Politicians in New Delhi have so far ignored protectionist complaints about the nascent and now largely foreign-led e-commerce industry. But Chinese influence, especially, is a potential source of angst, given regular border skirmishes. And if India really is the next China, perhaps local companies will end up dominating e-commerce and adjacent markets.

Ambani’s biggest challenge may be to understand the mindset of India’s burgeoning cohort of consumers. Reliance was founded as a textile company and its Vimal brand was one of the first major retail chains in the country. Until Jio, though, the bulk of the group’s recent focus has been on refining and petrochemicals. Plenty of Silicon Valley types would see that as a disqualifying old-school background.

But the Reliance boss, personally worth more than $40 billion according to Forbes, has at least one aspect of the tech model down: hooking users with free stuff. Part of Jio’s enormous success is down to low pricing, and Ambani initially gave the service away. Local media are already speculating that he will do the same with broadband.

Market share is important in consumer-facing technology, and achieving it has a lot to do with rapid expansion. That often means heavy investment without regard to revenue. Huge amounts of cash handed to a No. 2 or 3 player can leave a market leader in the dust. Ambani appears to have the stomach for the fight and, like Amazon’s shareholders, those at Reliance are proving exceptionally patient. Bezos, for one, needs to watch his back.

Reliance Industries Chairman Mukesh Ambani said on July 5 that he wants nearly half of the group's EBITDA to come from consumer businesses within 10 years, up from the current 13 percent. The Indian tycoon laid out the target at the company’s annual general meeting in Mumbai.

Reliance Industries Chairman Mukesh Ambani said on July 5 that he wants nearly half of the group's EBITDA to come from consumer businesses within 10 years, up from the current 13 percent. The Indian tycoon laid out the target at the company’s annual general meeting in Mumbai.