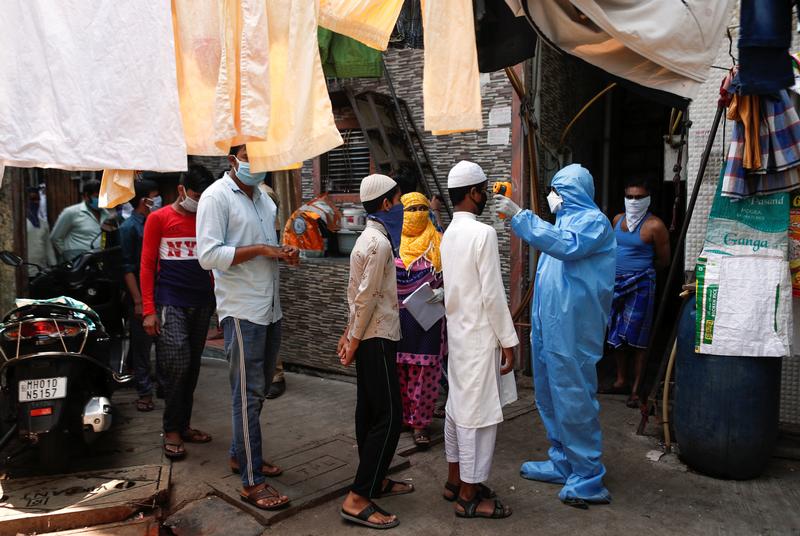 Dharavi is a window into India’s lockdown dilemma. Impoverished residents of the giant slum home to 1 million people in Mumbai stood shoulder-to-shoulder in long queues last week to collect free food. Indians are in the third week of a nationwide lockdown ordered by Prime Minister Narendra Modi and, for many of the hundreds of millions that still live in poverty, social distancing is proving secondary to survival.

Although many citizens have heeded the call to stay at home, a country or city is only as strong as its weakest link. Mumbai is dotted with small slums, all contributing to a spike in cases in the financial capital that will remain shuttered until at least the end of the month. Modi is expected on Tuesday to ask the nation to stay home for two more weeks. India has reported just 308 deaths from Covid-19 but one worry is it could see higher mortality rates than elsewhere because of the woeful capacity of the healthcare system.

India has taken some crisis cues from China, using drones to warn residents to stay at home and police have used force to deter violators. And it’s leaning hard on the private sector: large conglomerates from Reliance Industries to the Tata group have poured millions of dollars into Modi’s “PM Cares” fund. At best, the lockdown has bought time: authorities are turning trains into isolation wards, companies are rushing to make ventilators, entrepreneurs are developing cheap testing kits and enterprising villagers are sewing masks for hospitals.

Still, India lacks the military-style enforcement that allowed China’s worst-hit city Wuhan to ease travel restrictions after 76 days. There have been other misses too; the Supreme Court ordered private labs to make testing free of charge but partly backtracked on Monday after criticism that uncertainty over who will bear the final cost will hinder the response. Meanwhile the government failed to foresee that thousands of migrant workers who power the cities would head back to their villages as work dried up. The lack of official preparation forced many to walk.

The resulting shortage of labour, as well as general fear of the pandemic, is breaking poorly organised supply chains. Farm workers and many in the agricultural trade are exempted from the lockdown but without a way to market, crops are being left to rot and cows are dining on strawberries, as my Reuters colleague Rajendra Jadhav notes. City-dwellers are finding it hard to get fresh supplies. Sugar and rice exports have also been disrupted, with the latter pushing up global prices.

If India’s lockdown is imperfect, it is also unaffordable for those living on the margins, and some of the 400 million workers in the shadow economy. The government’s first relief package was for the poor: promising free cooking gas, rice and pulses. Next up will likely be something for small businesses. At best, the total might amount to 3% of GDP. Singapore and the United States and others have managed 10% plus.

That pushes more of the burden onto weak banks: IndusInd Bank’s share price is down 73% this year as confidence falters in the system’s ability to cope. Many individual and corporate borrowers are getting a three-month grace-period on repayments, but interest still accrues at 8% or more. And there is no reprieve for the most vulnerable who tap moneylenders at much higher costs. The result is that hundreds of millions of Indians are at risk of falling deeper into poverty and, or a debt trap.

For its little extra spending, India is already paying a steep price. As investors fret about heavy borrowing by the government, trading volumes have dried up and yields are rising even though the central bank has sharply cut rates: Reuters’ Swati Bhat notes that the Kerala state government agreed to pay 8.96% on its 15-year paper, about 200 basis points higher than a 15-year federal government bond.

The central bank may have little option but to print money. The problem is that rates on 10-year government debt are on par with inflation-adjusted rates of growth: Jefferies expects nominal growth of as little as 6.5% in the year to March 2021. A big fiscal stimulus cushioned India during the global financial crisis but a subsequent failure to trim back spending also fuelled rampant inflation that ultimately led to the country’s brutal 2013 currency crisis.

This all pushes India to want to end lockdown and race back to work. That risks a huge health crisis: four top hospitals in Mumbai stopped accepting admissions last week after workers were infected. It’s worryingly early in the crisis for such breakdowns. But forcing the hard-up to stay at home for too long on minimal support may test the patience of people who have little to lose.

Indian Prime Minister Narendra Modi has decided to extend a nationwide lockdown to curb the spread of the coronavirus, the chief minister of Delhi state said on April 11. The federal government did not confirm this decision. The western state of Maharashtra, home to the financial capital of Mumbai, announced on April 11 that it would extend the lockdown until the end of the month.

A doctor scans residents from Dharavi, one of Asia's largest slums, with an infrared thermometer to check their temperature as a precautionary measure against the spread of the coronavirus disease (COVID-19), in Mumbai, India, April 11, 2020.

Indian Prime Minister Narendra Modi has decided to extend a nationwide lockdown to curb the spread of the coronavirus, the chief minister of Delhi state said on April 11. The federal government did not confirm this decision. The western state of Maharashtra, home to the financial capital of Mumbai, announced on April 11 that it would extend the lockdown until the end of the month.