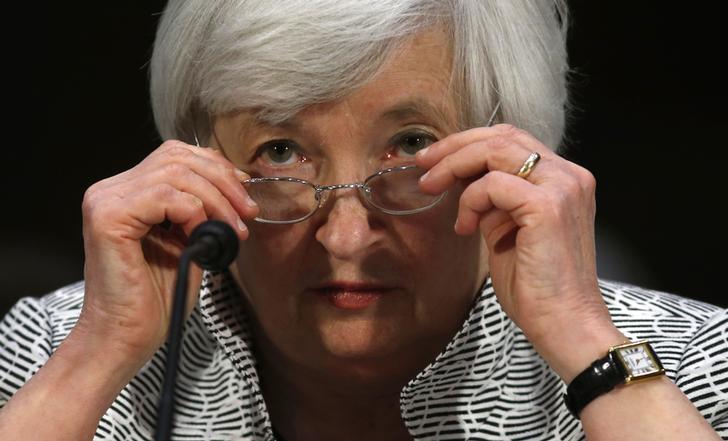 Janet Yellen faces a long list of challenges for 2015. The Federal Reserve chair must keep her fellow governors aligned on the timing of interest rate increases while battling a Congress hell-bent on circumscribing the U.S. central bank’s powers. A less obvious trouble spot for Yellen’s year two in the job may be restive shareholders of systemically important financial institutions.

Regulatory pressure, middling performance and a dearth of large-cap alternatives are making mega-banks like Citigroup and JPMorgan increasingly attractive for shakeup artists, which would add to the Fed’s workload. Sweeping reforms after the 2008 crisis handed the central bank greater authority over the nation’s biggest lenders. That means any moves they make, voluntary or otherwise, to break up or, heaven forbid, acquire rivals will require a green light from Yellen and her lieutenants.

Adjudicating corporate finance won’t be the Fed’s first order of business. Corralling some sort of consensus from the 12 members of the Federal Open Market Committee on when, and by how much, to raise the cost of borrowing will be her prime objective. During the first year of her term, the Fed had a relatively straightforward timeline to follow, by progressively cutting back each month on purchases of securities as part of its quantitative easing policy.

Opposition to the strategy was for the most part subdued. Two hawks, Richard Fisher and Charles Plosser, raised objections in September. A month later, the more dovish Narayana Kocherlakota dissented from the rest of the committee. Without a precise schedule to guide the Fed from here, its actions will be more clearly influenced by data, which leaves open greater possibilities for interpretation, and therefore disagreement.

Within the ranks of the Republican Party, which takes a majority of the Senate in January to give it control of both legislative chambers, the accommodative policy of recent years has decidedly more detractors. There is a strong possibility the new Congress will pass a bill calling for regular audits of the Fed by the Government Accountability Office. Even on the left side of the U.S. political spectrum there is sympathy for reining in the central bank. One Democratic senator proposed requiring the Federal Reserve Bank of New York’s boss to be nominated by the president and confirmed by the Senate.

So Yellen has a lot to think about before considering the increasingly uppity owners of big banks. Though their shares enjoyed a strong run from the depths of the financial crisis, they have languished of late. Both Citi and JPMorgan have underperformed the S&P 500 Index this year. After finally creeping up to trade at book value, there is a concern that banks have nowhere to go, especially as they squeeze out returns on equity of, at best, 12 percent. And their ability to return capital is constrained by regulators. The Fed took the unusual step of thwarting Citi’s efforts to raise its dividend earlier this year, citing concerns over its internal controls.

This has some stockholders running the numbers on breaking up the banks into more easily valued, less complex beasts. Prospector Partners, an investment manager, recently argued in a letter to investors that the above-market returns generated by activist funds like Elliott Management, Pershing Square and Starboard over the past year could lead to activism among the big banks.

Indeed, by Prospector’s reckoning, JPMorgan could create four distinct companies focused on consumer finance, investment banking, asset management and commercial banking, with a valuation that is as much as 50 percent greater than its $230 billion market capitalization. Citi could be worth at least a quarter more than its current value, according to Breakingviews calculations.

A litany of successes over the past year has enabled activist funds to gather greater war chests. Many of the biggest targets, including Apple, Procter & Gamble and Microsoft, already have been harassed. Banks, therefore, make a logical next choice. Over the past decade, only a handful, including UBS and HSBC, have proven somewhat vulnerable. Agitators otherwise have largely steered clear because their fortunes are so tied to regulators. It’s hard to see, however, why any move to simplify them would be unwelcome.

Less obvious would be deals urging the already big to bulk up. For instance, a move by Goldman Sachs to get into the custody business and expand in asset management by, say, acquiring $46 billion Bank of New York Mellon makes strategic sense. It would diversify Goldman away from its reliance on fixed-income trading. It also might appease the 230-year-old BNY Mellon’s newest board member and activist shareholder, Nelson Peltz’s Trian Fund Management.

While such a combination might actually make Goldman a more stable institution, it would also make it an even more systemically important one. That would be a trickier decision for regulators than approving a Citi sale of its U.S. retail branches to, say, U.S. Bancorp, or deciding whether JPMorgan could spin off its asset management business. Activists already have stormed their way into the biggest U.S. boardrooms. Yellen may want to gird for them to show up at hers.