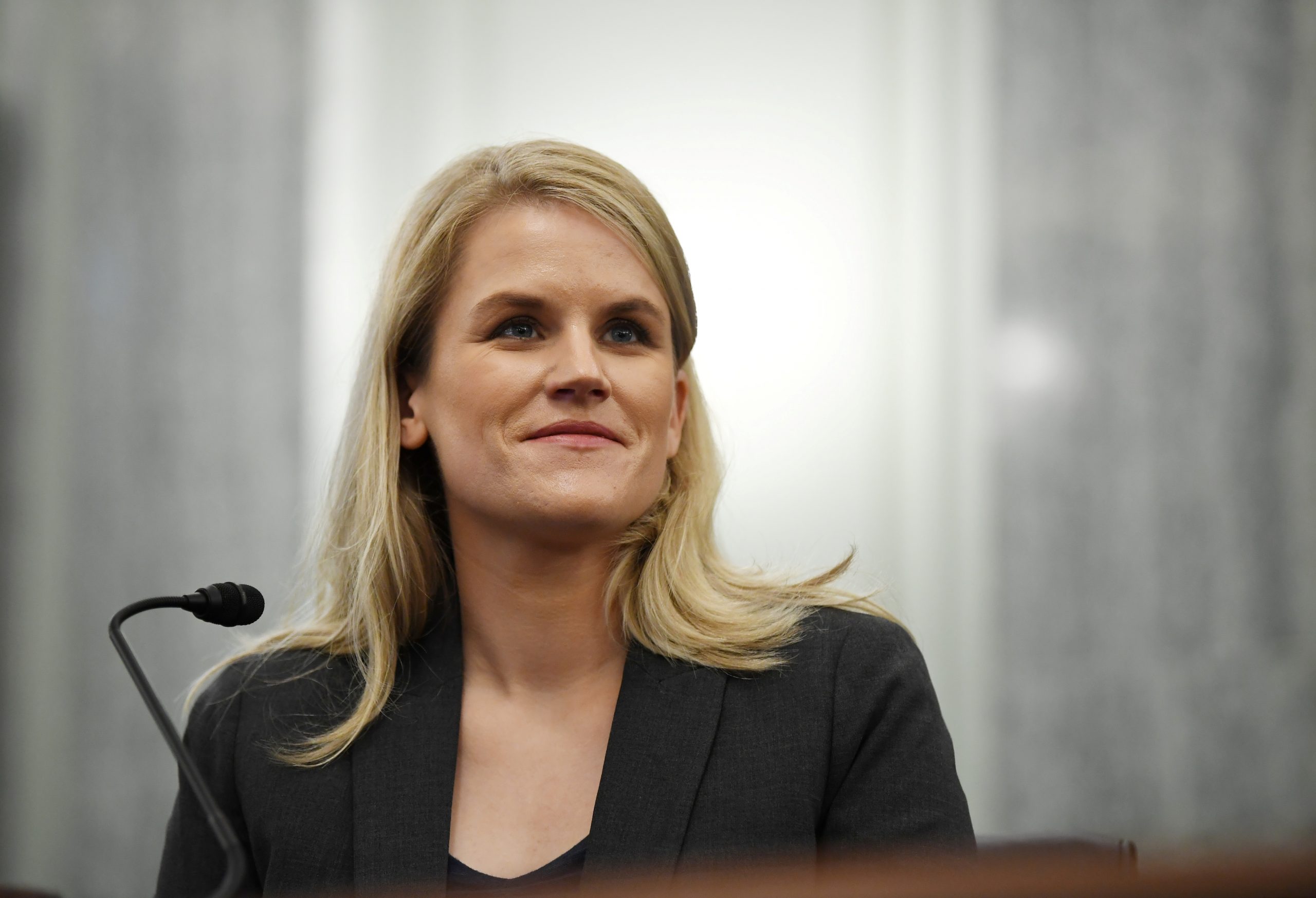 Work it. Facebook whistleblower Frances Haugen is going to be tough to discredit. She has a shrewd public relations campaign to thank for that.

She began as an anonymous source for a Wall Street Journal investigation, then revealed herself on the popular U.S. news show “60 Minutes.” Almost simultaneously, she had the website franceshaugen.com ready to roll. Fans could sign up for email updates from her and she even linked a press contact. She capped it off with articulate testimony before a Senate hearing on Tuesday.

Companies from Google to Tesla have been blamed for going on smear campaigns against employees and other whistleblowers that aired public grievances. It helped that Haugen had thousands of documents to back up her claims that Mark Zuckerberg’s firm did little to rein in hate speech and change what it knew was Instagram’s damaging effect on the mental health of teenage girls. Still, the media blitz is a model for other would-be whistleblowers to emulate. (By Gina Chon)

Dodgy connection. Technology investors will tolerate years of scant earnings for the promise of growth. Yet as 3.7 billion euro video-software specialist TeamViewer discovered on Wednesday, they’re unforgiving if the top line starts to slow. The German group has lowered its financial targets for the third time this year. Companies that bought its video-conference software early in the pandemic are cutting back. “Many of you will be disappointed,” Chief Financial Officer Stefan Gaiser said on a call for analysts and investors. He was right: TeamViewer shares fell more than 25% and are now worth a third less than their 2019 initial public offering price.

The plunge is embarrassing for private equity group Permira, which still owns 20%. But the broader lesson is that last year’s pandemic winners can easily become losers. Shares in food delivery groups like DoorDash have soared, partly because investors hope lockdown-era demand will persist. TeamViewer’s crash shows what happens when those hopes prove hollow. (By Liam Proud)

Hear goes nothing. Denmark’s GN Store Nord is placing a pricey wager on youth. The $9 billion maker of pensioner-focused hearing aids on Wednesday announced it was shelling out 8 billion Danish crowns ($1.3 billion) for SteelSeries, which makes fancy headsets popular with young gamers.

Copenhagen-listed GN could do with a boost. The company on Tuesday downgraded revenue growth forecasts for its core hearing aid unit, citing delays in product launches. Over the past year, shares have lagged those of Italian hearing aid retailer Amplifon, which last month announced punchy sales growth targets.

GN’s appetite for the deal is clear. SteelSeries made 1.3 billion crowns of revenue in the first half of 2021, implying that its enterprise value is 3.1 times full-year sales. That’s a chunky premium to U.S. rivals Corsair Gaming and Turtle Beach, which trade in line with their estimated revenue this year, according to forecasts compiled by Refinitiv. GN is banking on technological and supply-chain synergies to make up the difference, and with shares bouncing 5% on Wednesday morning, investors seem willing to lend a sympathetic ear. (By Oliver Taslic)

Double Glazing. Soccer star Cristiano Ronaldo has so far helped Manchester United’s share price more than its on-field results. The $3 billion club’s equity value has risen 12% since the Portuguese striker signed in late August, a period in which the team has only won three in seven games. That’s not lost on the controlling Glazer family, two members of which are selling a combined $186 million worth of shares.

The sell-down is unlikely to appease fans, many of whom want the club to have a greater free float so that supporters can have more say. Instead, the clan is still firmly in control: its overall ownership will fall to 69% from 74.9%, and it will retain almost all the voting rights through special Class B stock. The Glazers merely seem to be taking a few chips off the table. Manchester United’s share price is now back in line with its pre-pandemic level, yet revenue won’t fully recover until 2023, according to Refinitiv data. The Glazer share sale looks well timed. (By Liam Proud)

Place in the sun. Tui is bagging a capital sun-lounger just as the dark sets in on Europe’s holiday season. The Germany-based tour operator – the continent’s largest – announced a rights issue to raise 1.1 billion euros to pay down state loans. A second capital raise in less than a year and the offer’s meaty 35% discount to shares’ theoretical ex-rights price doesn’t appear to have put off investors, which include 32% shareholder and Russian steel tycoon Alexey Mordashov: the stock was trading broadly flat on Wednesday morning.

Such optimism will warm boss Friedrich Joussen, who boasted of late summer bookings already being ahead of 2019 levels. True, next year’s 1.5 billion euros of EBITDA is projected to surpass Tui’s pre-pandemic total. But include the new money and net debt could still be 4.7 billion euros next year, according to Refinitiv data. That’s about 3 times EBITDA, compared with a multiple of less than 1 in 2019. Joussen will need holidaymakers’ wanderlust to stay strong if he is to avoid yet another capital increase. (By Christopher Thompson)

Poor Exchange. Hong Kong’s leader Carrie Lam has given a boost to the city’s consultation on U.S.-style special-purpose acquisition companies. She flagged the plans for them in her annual policy address on Wednesday. But financiers’ reception of the idea has been unusually mixed so far, even though anything that earns fees while helping the Fragrant Harbour compete with New York is usually cheered. They’re sceptical that the proposed framework will pay off on either score.

The local bourse’s plans contain safeguards not seen in New York, including limiting SPACs to professional investors and mandating a minimum size of $128 million. These, bankers fear, will deter SPAC promoters even as they acknowledge tougher rules are needed because of the city’s history of questionable backdoor listings. The minimum size is still beyond many cash-seeking startups, for example. Hong Kong could perhaps make more of a difference by targeting those smaller companies rather than trying to copy New York. (By Jennifer Hughes)

Home stretch. A small bucket of cold water is being poured on the scorching housing market Down Under. A day after Reserve Bank of Australia Governor Philip Lowe flagged the importance of lending standards, even while pledging to keep interest rates ultra-low, the Australian Prudential Regulation Authority on Wednesday told banks to use a slightly tougher buffer – 3 percentage points over the loan rate instead of 2.5 percentage points – to assess a borrower’s ability to repay a mortgage.

While the change is minor, especially compared to measures implemented by neighboring New Zealand, it sends a signal of concern. There’s good reason to intervene. Some 22% of loans issued in the second quarter were at more than six times the borrower’s income, up from 14% two years earlier. Household debt sits at 180% of income, according to Morgan Stanley analysts. Although there’s likely to be a delicate political balance in cooling off a market so dependent on construction and home prices, there’s a good chance regulators will come knocking again. (By Jeffrey Goldfarb)