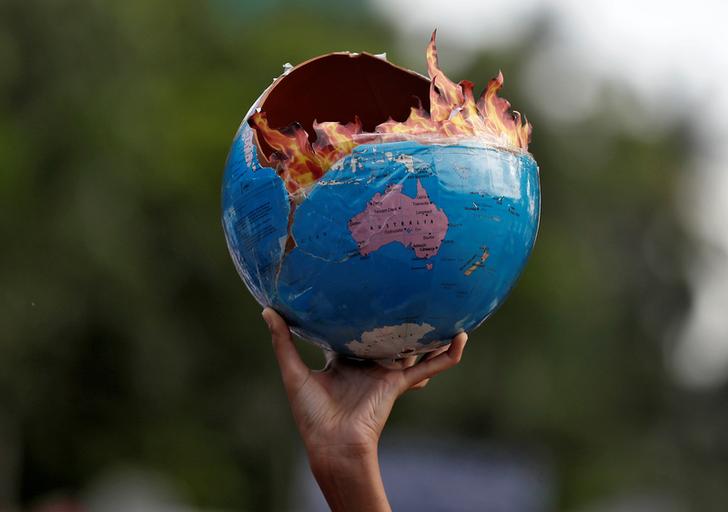 Hot air. Defending his vacuous net-zero emissions target at the United Nations climate summit was always going to be a struggle for Australia’s Prime Minister Scott Morrison. But he has undermined it himself just two days after laying it out, before even leaving for Glasgow. First it turned out Treasury had done barely any work on the plan’s financials. Then on Thursday Morrison said he won’t sign up to an initiative by the European Union and the United States to cut methane pollution 30% by 2030.

Granted, the federal government’s outline envisions taking little action until after 2030, and mostly by unproven or non-existent technology. But “feed supplements” to reduce cattle-belched methane is one action that’s mentioned, and its adoption could be speeded up. It would have a big return, too, since methane is on some counts 84 times more potent a greenhouse gas than carbon dioxide. Trouble is, that particular emission is also an outsized and growing pollutant in the country’s coal and gas industry that the government refuses to address. A willingness to change tack would inject some much-needed credibility. (By Antony Currie)

Half full. The world’s largest beer maker has given investors something to drink to – strong growth. Anheuser-Busch InBev’s shares jumped 8% on Thursday after the maker of Stella Artois and Budweiser upgraded this year’s outlook thanks to buoyant sales in Brazil. Chief Executive Michel Doukeris now expects 2021 EBITDA to increase 10%-12%, compared with his previous forecast of 8%-12%.

That should help the $100 billion brewing colossus pay down debt, which stood at $83 billion at its latest reckoning. A hangover from the $100 billion purchase of SABMiller, the leverage is a toppy 4.4 times AB InBev’s expected EBITDA for 2021. It’s also a reason why Doukeris denied investors an interim dividend. Yet with his products slipping down so smoothly, payouts might be restored sooner. If Doukeris directs AB InBev’s average $9 billion of free cash flow over the next three years to paying down debt, his leverage ratio becomes a more manageable 2.5 times, based on Refinitiv estimates. Faster growth means investors getting their reward quicker. (By Aimee Donnellan)

No COP-out. There’s merit in India’s refusal to set a net-zero target in the run-up to the United Nations climate conference in Glasgow. The rich world is fixated on plans to become carbon neutral by 2050 or thereabouts. By holding out, Prime Minister Narendra Modi’s government can highlight different priorities.

First, it maintains pressure on the biggest historical emitters to properly support the climate transition elsewhere. Poorer countries have not contributed as much to damaging the environment and are relying on dirty fuel to power the economic growth that will lift living standards. If all the big countries set their own net-zero goals, they may be less incentivised to financially help others.

It also encourages the rest of the world to consider India’s climate position beyond coal. The country’s big leaps in renewable energy, particularly solar, and its cost-competitiveness mean it can be part of global climate solution, rather than just a problem to be fixed. (By Una Galani)

Only human. A red-hot property market is the wrong time to remove safeguards. Yet ANZ, Australia’s fourth-largest bank, is at risk of doing just that. The $60 billion lender’s mortgage book fell slightly in the six months to the end of September even though house prices have rocketed some 20% in the past year and sale listings have jumped almost a third in recent weeks. The problem, explained boss Shayne Elliott, stems from a decision a few years back to process all mortgage applications from third-party brokers by hand.

That was probably a smart move, considering the role brokered loans around the world played in the 2008 financial crisis. Automation also enabled poor practices like robosigning. Now Elliott is getting the machines in to help speed up parts of the procedure. That may help win back some market share – Elliott says the bank has doubled its processing capacity and aims to double it again. But if speed comes at the expense of soundness, expect another U-turn. (By Antony Currie)

A participant holds a replica depicting globe on fire during a "Fridays for Future" march calling for urgent measures to combat climate change, in Mumbai, India, September 27, 2019.