25 May 2021 By Breakingviews columnists 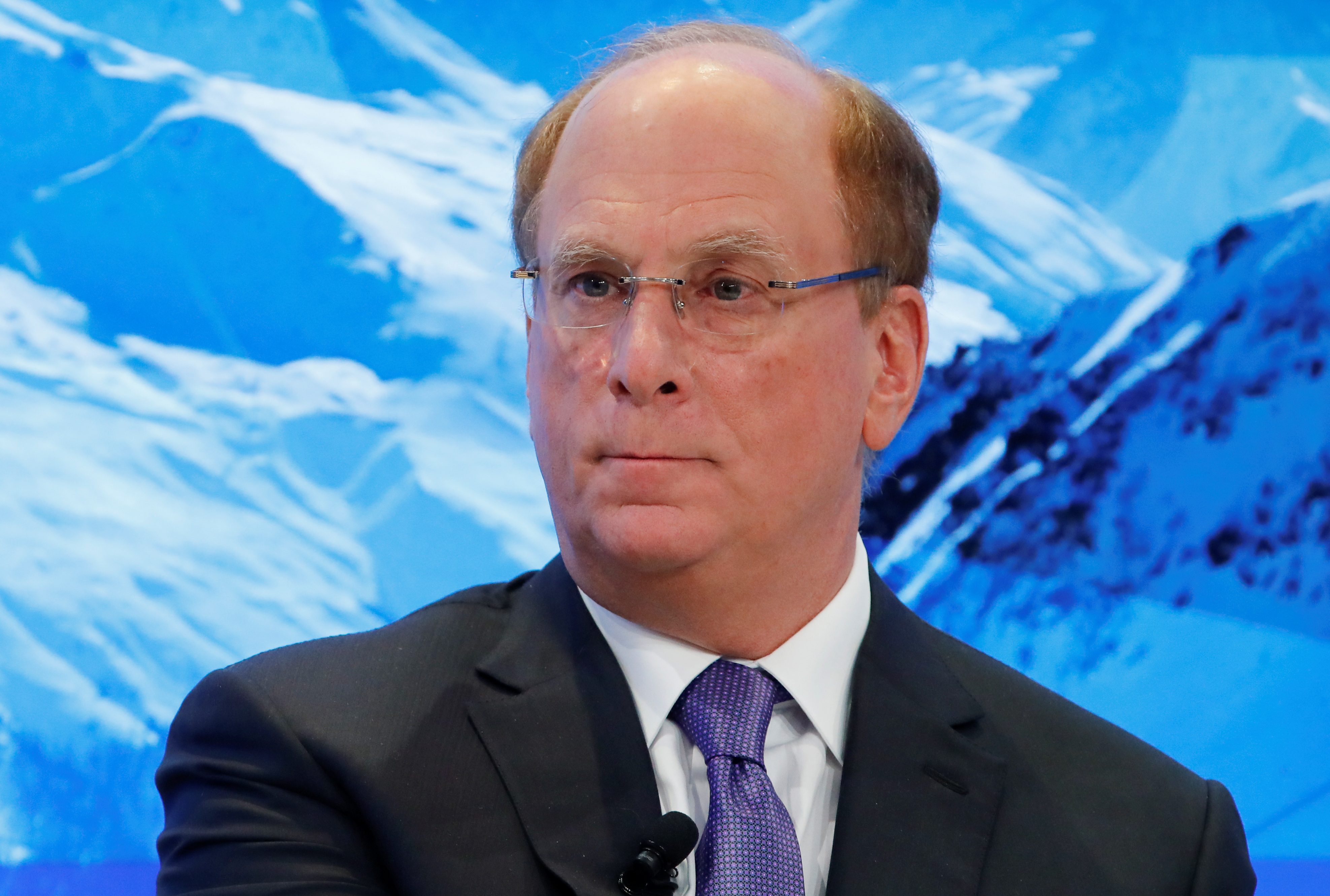 Investor No. 1. BlackRock will back three of a rebellious shareholder’s director nominees at $250 billion Exxon Mobil’s annual meeting on Wednesday, according to Reuters. The move by the world’s biggest asset manager could swing other votes. That’s a test for Exxon boss Darren Woods. In a sense, though, BlackRock Chief Executive Larry Fink is also on trial.

Investment firm Engine No. 1 and others want a reluctant Exxon to pay more heed to its future, or lack thereof, as a purveyor of fossil fuels. If successful, the effort to replace directors might precipitate both the boardroom shock and the new ideas required.

BlackRock, meanwhile, has ramped up its voting against companies’ recommendations, notably when they show insufficient attention to climate change. The $9 trillion asset manager voted against two Exxon directors and in favor of an independent chair last year, according to its disclosures. All of this bolsters BlackRock’s credentials when it comes to promoting responsible corporate ownership. That’s no bad thing since Fink is facing his own shareholders on Wednesday, too. (By Richard Beales)

LionTree king. A noted media M&A adviser has traded places with his former employer. Aryeh Bourkoff’s boutique firm LionTree has zipped up the ranks of the merger league tables, appearing on $125 billion of deals so far this year, according to Refinitiv, including counseling AT&T on its spin-off of WarnerMedia to Discovery. Bourkoff is also working with movie studio MGM Holdings on its talks with Amazon.com, the Wall Street Journal has reported.

The former UBS banker is reaping the benefits of focus. A slew of deals in technology, media and telecoms has delivered a rare reversal of fortune: Bourkoff’s outfit is currently the 13th biggest adviser by deal value, based on Refinitiv rankings, one place above the bank he left in 2012.

Moreover, Bourkoff has an edge – for now – over two high-profile former colleagues. The eponymous boutique run by Ken Moelis, who like Bourkoff was formerly UBS’s head of investment banking in the Americas, is currently the 17th ranked merger adviser worldwide. Centerview Partners, the shop of former rainmaker Blair Effron, is 16th. Media is having a moment, and relative to its pack, so is LionTree. (By Jennifer Saba)

2020 hindsight. Flattering projections from special-purpose acquisition companies, or SPACs, need to be taken with a large grain of salt. Lordstown Motors is the latest example. The company said on Tuesday that it needs more cash to ramp up production of electric trucks.

Lordstown said last August when it agreed to merge with the DiamondPeak SPAC and again later in the year that the $675 million it was raising should be sufficient to reach positive cash flow. Things haven’t gone smoothly. Equipment, shipping and third-party engineering services have cost more than forecast. The company estimated $90 million of SPAC proceeds would go on research and development. It’s now forecasting spending up to $290 million this year. Moreover, Lordstown said it would, at best, produce only half as many vehicles as previously indicated in 2021.

An official at the Securities and Exchange Commission warned in April that those involved in SPAC can’t assume they are immune from being sued if forecasts, which are used liberally in such deals, don’t pan out. Investors should discount projections heavily, if not ignore them altogether. (By Robert Cyran)

Retail therapy. Sinch may be prepping for another shopping spree. The Swedish customer-service technology firm late on Monday raised 9.4 billion Swedish crowns ($1.1 billion), over 10% of its market value, through a directed issue of new shares. Singapore sovereign wealth fund Temasek and a SoftBank Group-run fund scooped up nearly a quarter of them.

Sinch, which sends text messages for delivery firms like DoorDash, bought U.S. rival Inteliquent in February for $1.1 billion in cash. Monday’s capital raise brings its net cash to about $1.4 billion, more than enough to cover the Inteliquent deal, which closes later this year. The excess, plus Sinch’s over 100% share price rise in the past year, gives it plenty of firepower for future acquisitions. Growth will help Sinch catch up with U.S. rival Twilio in terms of size, but not necessarily valuation. The $55 billion firm trades on a whopping 15.4 times next year’s sales, compared to Sinch’s relatively modest 4 times, according to Refinitiv data. (By Karen Kwok)

Dilutive accretion. Culligan International is part of the deal flow, again. Private equity firm BDT Capital Partners is taking a stake in the water-treatment firm, valuing it at $6 billion including debt, according to the Wall Street Journal. That is more than six times what its current majority owner, leveraged buyout shop Advent International, paid in 2016. Culligan has done some 90 deals in the five years since then.

Roll-ups can become unstuck when a company runs out of targets or enthusiasm for its product slows down. But water management has only gained in importance and value as climate change has put fresh drinking water at risk in many parts of the world. Similar Japanese company Organo’s shares have more than tripled in five years, versus an 87% return for the Nikkei 225 Index and a 121% return for the S&P 500 Index.

Culligan is something of a mulligan stew of water assets. But the commodity’s scarcity and the company’s experience absorbing other businesses could keep the next owners nicely hydrated. (By Lauren Silva Laughlin)

Funny money. A Nintendo heir has redesigned the staid family office. Visitors landing on the website for the Yamauchi No. 10 investment unit are now greeted by an animated unicorn and colourful characters bopping along to catchy arcade-style music.

It might be more than a gimmick. The entity, which was set up last year by Banjo Yamauchi to manage assets owned by the late Nintendo President Hiroshi Yamauchi, proposes to take a generally warmer approach, according to a Bloomberg interview published Tuesday. Per the website, funds will be deployed to tackle Japanese social issues in order to “return our inherited material and spiritual wealth to the public.” That jives with a broader trend globally: although 43% of family offices still look to maximise financial returns, 61% of the next generation are interested in making an impact, in contrast to just 47% of their parents, a 2020 UBS study found. Details on investments are scant, but if Yamauchi No. 10 can make social responsibility look fun, so much the better. (By Sharon Lam)

Sofa strain. Made.com may not get an armchair ride from stock market investors. The online furniture retailer popular with young professionals announced plans on Tuesday to list 25% of its shares on the London Stock Exchange. It wants to sell 100 million pounds worth of new stock. Meanwhile, some existing investors are getting out.

Given its loss-making past, its ambitions look suspiciously well-sprung. The company co-founded in 2010 by lastminute.com entrepreneur Brent Hoberman reckons it can nearly quadruple gross annual sales to 1.2 billion pounds by the end of 2025. That’s based on it taking a chunk of the 504 billion pound global furniture market when it expands beyond Europe in 2023. But muscling in on rivals like $33 billion Wayfair will be tricky, and the likes of Germany’s Westwing are already competing on its home turf. U.S. online mattress seller Casper Sleep’s post-IPO woes show what can happen when hype and reality misalign. Investors may want to haggle over the price. (By Aimee Donnellan)

Devoutly to be wish’d. Beijing is reviving its distrust of cryptocurrencies. In 2017 it shut down domestic exchanges, but stopped short of making it illegal to own bitcoin and left miners alone. Now they too are being forced to shut down, partly because bitcoin production consumes 128 terawatt hours of energy per year. Chinese regulators with experience fighting speculation in exotic assets like egg futures and ornamental walnuts are also trying to stop financial institutions from dabbling in crypto assets, which are particularly risky as they evade capital controls. As with the prior crackdown, decision-makers in Beijing have set off a double-digit drop in bitcoin’s value.

Suspicions about crypto-currencies’ economic utility look validated. It’s unclear how long it will take to migrate the 65% of production capacity currently in China to other locations, so the market could remain unstable. Yet those who like trading them might appreciate how decoupling bitcoin from Beijing’s whims will reduce volatility. For fans and critics alike, there’s plenty of upside to this crash. (By Pete Sweeney)