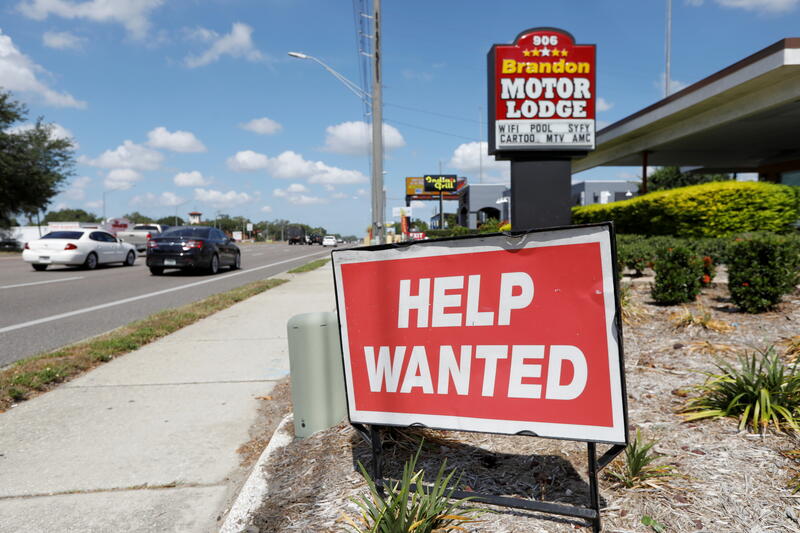 Progress with caveats. The U.S. economy’s addition of 850,000 jobs in June means about 70% of positions lost in the pandemic have now been regained. Still, there are signs the recovery remains uneven, like the increase in those who have been out of work for at least 27 weeks.

Payrolls rose by only 269,000 in April. May brought a 583,000 increase. The June figure beat economists’ estimates, according to a Reuters survey. Leisure and hospitality added 343,000 jobs. That sector is back in bloom: In recent weeks, the number of U.S. seated restaurant diners finally returned to 2019 levels, according to reservations app OpenTable.

But weaknesses remain. The number of long-term unemployed rose by 233,000 to 4 million. The rate of women who are out of work ticked up, too. Other markers important to the Federal Reserve are also still falling short. For instance, the Black unemployment rate rose slightly to 9.2% last month, a move in the wrong direction. Until disadvantaged groups benefit more, the central bank won’t want to take its foot off the monetary gas. (By Gina Chon)

Beijing powerplay. Didi Global has hit a potential roadblock. Two days after its shares started trading in New York on Wednesday, China’s cyberspace agency revealed a national-security related investigation into the ride-hailing giant. It’s one way for the Chinese Communist Party, which celebrated its 100th anniversary on Thursday, to show it’s still relevant.

The news knocked an initial 9% off Didi’s $79 billion market value, though the stock later recovered somewhat. The company was told it can’t add new users while the probe is ongoing. That’s a minor concern for investors for now. The longer-term question is what to read into the timing.

It’s almost as if the Chinese leadership can’t bring itself to block most companies from listing in the United States, as it effectively did with Alibaba’s financial offshoot Ant, but wants to send a message: However much money is raised – $4.4 billion in Didi’s initial public offering – and however wealthy insiders become on paper, they’re still beholden to the CCP. (By Richard Beales)

Money cures. Private equity firms are on the hunt. And with $1 trillion sloshing around, the industry is bound to start playing hot potato. That happened Friday, with buyout firm EQT and Goldman Sachs’s asset management group agreeing to buy pharmaceutical outsourcing firm Parexel from Pamplona Capital Management for $8.5 billion.

The Massachusetts-based company’s value has increased some 70% since Pamplona bought it in 2017, likely a much higher return for the buyout firm if it lopped on the typical leverage. Yet there’s a reason these values could continue to rise. That’s largely because there has also been a steady tailwind behind companies like Parexel, which helps drug companies perform research and clinical trials. Drug trials are getting bigger and more complex, and both biotechnology and giant pharma firms increasingly prefer to outsource lab work and clinical trials.

As the pandemic showed, humanity needs more drugs. Parexel – and its new owners – are positioned to capitalize, again. (By Robert Cyran)

In a tangle. When it comes to Chinese cotton, fashion retailers are damned if they do, and damned if they don’t. French prosecutors have opened an investigation into four firms suspected of concealing “crimes against humanity” in the northwest Xinjiang region, where Beijing is accused of forcing Muslim Uyghurs to work. It denies the allegations.

Japan’s Fast Retailing, $93 billion Zara-owner Inditex, France’s SMCP, majority-owned by China’s Shandong Ruyi, and $8 billion Skechers are the targets of the French probe. Given the bulk of Chinese cotton comes from the region, it’s hard to avoid and tracing it is notoriously difficult. Those who have taken a tougher stance, including $34 billion H&M are under Chinese boycott. Other European countries will be under pressure to follow France’s lead. Washington has already been impounding shipments it believes contain Xinjiang thread. Picking a side in the fracas is becoming harder. (By Dasha Afanasieva)

Normality interrupted. Denmark’s Ambu is raising the alarm about a return to pre-pandemic healthcare patterns. The maker of resuscitators and bronchoscopes cut this year’s revenue guidance to 17% from a previous target of 17%-20%. Chief Executive Juan Jose Gonzalez also reckons the $7 billion company’s operating profit margin will shrink to 10% from the 11%-12% previously forecast. Little wonder Ambu shares fell 12%.

Friday’s slump is Ambu’s second big blip in less than two months. The company lost a quarter of its market value in May after it missed consensus expectations on revenue. The latest disappointment is mainly down to extended delays in elective surgeries as patients steer clear of hospitals, despite mass vaccine drives. Global freight disruptions to equipment delivery schedules are compounding the sickly outlook. Ambu expects sales of its single use endoscopes, vital to prevent contamination in Covid-19 patients, to exceed expectations. But that suggests the wider pandemic is still far from over. (By Aimee Donnellan)

Cloud nine. Cloud gaming is the future – and it always will be. So joke the purists, who doubt the feasibility of streaming computer games onto users’ devices, dispensing with the need for hardware like Microsoft’s $500 Xbox.

Facebook and Ubisoft Entertainment are hoping to prove them wrong. The social network announced on Thursday it’s bringing the $9 billion French developer’s mobile titles – including “Assassin’s Creed Rebellion” – to its 1.5 million monthly gaming users. Ubisoft could do with a boost: just 8% of its 2.2 billion euros of revenue came from mobile games in its latest financial year, and its sagging share price could make it a takeover target.

Cloud enthusiasts were left in the rain last year, as gamers stuck at home flocked to the Xbox and Sony’s PlayStation 5. But as players get back on the road and broadband technology improves, cloud gaming may yet have its day in the sun. (By Oliver Taslic)

Aim high. In the survival-themed hit game “PlayerUnknown’s Battlegrounds”, players shoot their way to victory. Parent Krafton, however, missed its target in its initial public offering. The Tencent-backed company cut the deal size after South Korea’s regulator warned it needed to revise its filings. Local media reports that Krafton’s ambitious valuation was probably the reason.

In its revisions, Krafton notably removed companies like Walt Disney and Warner Music Group from its peer group. At the top of the latest indicative price range, Krafton will raise $3.8 billion, down from the initial target of as much as $4.9 billion. That implies an equity valuation of up to $21.5 billion, according to analyst Sanghyun Park, who publishes on SmartKarma, or 36 times the company’s own forecast 2021 earnings.

That’s broadly in line with South Korean gaming rivals like Kakao Games and NetMarble. Unlike Disney, which spans films, theme parks and more and trades on a much richer multiple, Krafton relies on the PUBG franchise for most its revenue. The company may have broader future ambitions, but that’s another game. (By Robyn Mak)

Bad debt redux. Consumption and activity are rebounding fast after India’s brutal second viral wave, but the central bank’s latest financial stability report hints at some of the credit pain left behind.

India’s borrowers have received scant support compared to their counterparts in developed economies. The probability of default for Indian retail counterparties to European Union banks, for example, increased to 8.6% in the fourth quarter of 2020, up from about 5% a year earlier. For a group of six rich countries, including France and Germany, that figure fell or held steady over the same period.

Hence the sombre results from the Reserve Bank of India’s stress tests. Gross non-performing loans might rise from 7.5% in March 2021 to 9.8% by March 2022, or as high as 11.2% if economic conditions worsen. Yet analysts at Macquarie point out actual bad debt levels have undershot projections for the last three years. There’s another bright spot too; the RBI reckons that even in a worst-case scenario, no domestic bank’s core common equity Tier 1 capital will fall below the minimum required. India’s post-pandemic debt legacy might prove manageable. (By Una Galani)