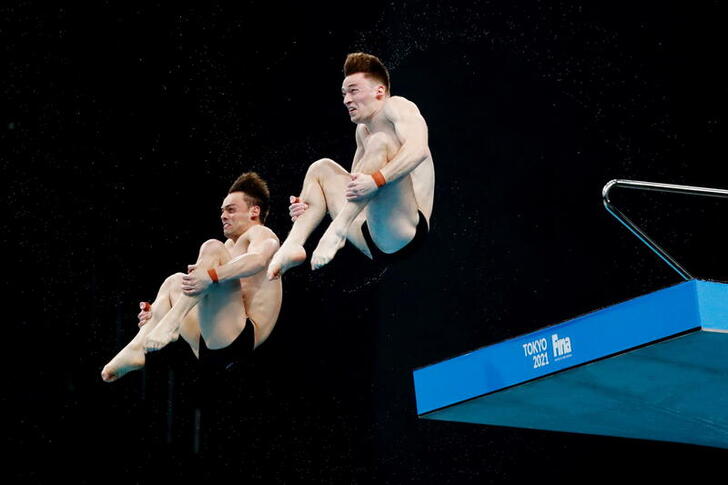 Not proud as a peacock. The Olympics in Tokyo were already challenged after delays and a ban on spectators. Yet the tally of American television and streaming viewers from Comcast’s NBC Universal was still a shocker. It’s another bad omen for live sports, the beating heart of U.S. TV.

NBC said on average 15.6 million people tuned in to watch its prime-time Olympics coverage on TV and its streaming service during the 17-day event, against 31 million for the 2012 show in London and 27 million for Rio de Janeiro in 2016. It’s the smallest audience since the network started with the summer games in 1988.

The broadcaster paid $8 billion for the rights to air the competition through 2032. While executives said the Tokyo games were profitable, the effort might become less worthwhile. Advertisers are under political pressure to boycott the winter games in Beijing. Meanwhile, the TV audience earlier this year for the Super Bowl, America’s most watched extravaganza, fell to its smallest since 2006. Of course, the internet is giving viewers other ways to watch. But live sports was the last bastion for TV. That’s now changing. (By Jennifer Saba)

Bird’s-eye view.  Abrdn, the UK asset manager formerly known as Standard Life Aberdeen, may be turning the corner after years of losing client money. While investors have continued to withdraw more than they invested via it, net outflows excluding cash funds were just 1.9 billion pounds in the first half. And as lucrative strategies such as higher-fee private markets grew, the 6.5 billion pound group generated a higher revenue margin of 27.6 basis points on its 530 billion pounds of assets.

Chief Executive Stephen Bird’s turnaround has some way to go. As well as stopping the rot in investment management, he needs to grow in Asia, cut costs and develop platforms that handle funds for financial advisors and individuals. Competition in retail savings is likely to increase, particularly with players like JPMorgan piling in. Yet Abrdn has firepower: Besides 1.7 billion pounds of surplus capital, it has stakes in Indian ventures worth around 2 billion pounds that can be sold. With his business stabilizing, Bird can afford to be bold. (By Neil Unmack)

A mixed basket. Amazon will face an antitrust investigation in India alongside Walmart’s Flipkart. The country’s top court on Monday scolded the pair for trying to resist a probe for allegedly promoting select sellers on their platforms, among other things. The U.S. e-commerce behemoth promptly announced it would disband a controversial seven-year-long equity partnership which governed one of its top merchants. That won’t hamper Amazon too much if the erstwhile partner can keep selling on its own. And Amazon has more large retailers than it did when it first started.

Elsewhere the country’s top court on Friday helped Amazon move a step closer to blocking a $3.4 billion deal that would have handed control of Future Group’s retail assets, including the country’s second biggest retailer, to Mukesh Ambani’s Reliance Industries. India upheld an interim order by a Singapore tribunal to press pause – a tentative legal win that many doubted the Americans could secure in a market seen to favour domestic rivals. So far Amazon’s grit is serving it well. (By Una Galani)

Against all odds. Flutter Entertainment’s U.S. momentum might have strengthened its rival Entain’s hand at the dealmaking table. Tuesday’s half-year results for the 23 billion pound London-listed gambling firm showed its U.S. revenue rising 159% year-on-year to 652 million pounds ($906 million), performing much better than its UK and international businesses, which saw slower sales growth. The company now expects its U.S. division to generate positive EBITDA in 2023 and plans to spin off and list part of the business. Shares rose as much as 9% on Tuesday morning.

That positive news should bode well for UK rival Entain, which has an American joint-venture with MGM Resorts International. Earlier this year, the U.S. group walked away from an $11 billion takeover, but can return in July. The Ladbrokes-owner’s shares have grown 150% in the last month, and are now some 40% above MGM’s offer in January. With the U.S. market growing rapidly, MGM will have to pay up if it wants to keep playing. (By Karen Kwok)

Preserving value. The ingredients in ingredients are becoming pricier. On Tuesday, Dutch flavourings and preservatives maker Corbion’s shares fell as much as 9% after higher prices for freight and raw materials forced it to downgrade its 2021 EBITDA margin target from over 15% this year so far to as little as 13%.

The slump may have a read-across for British rival Tate & Lyle, which last month sold a controlling stake in its sweeteners business to private equity, leaving it, like Corbion, as a pure-play seller of ingredients that make food tastier and longer-lasting. Corbion’s shares have more than tripled since it pulled off a similar split in 2012.

The Dutch group’s stock was arguably a little rich. Before Tuesday’s decline, the group had been trading at a toppy 30 times 2022 earnings. The multiple has now fallen to 27 times. Tate & Lyle, however, still looks cheap, valued at just 13 times forward earnings. Its shareholders still have plenty to gain from the separation, but Chief Executive Nick Hampton may have to work a little harder. (By Dasha Afanasieva)

The house wins, again. In June 2020, casino mogul Tilman Fertitta agreed to sell his Golden Nugget Online Gaming outfit to a special-purpose acquisition company – also managed by him – for $314 million in shares plus $30 million in cash. Now another ex-SPAC, $21 billion digital sports and gaming company DraftKings, is sweeping up the publicly traded Golden Nugget for an equity value of around $1.6 billion, the companies said on Monday.

That is a premium of more than 50% to the target’s market value on Friday. Fertitta’s entertainment group now owns about 46% of Golden Nugget, so the Houston Rockets owner’s share, payable in DraftKings stock, is worth around $700 million. That’s a handy doubling since just over a year ago.

That two SPAC progeny are combining is a reminder of the rush of blank-check vehicles that came to market in recent years. DraftKings’ future value hinges on further liberalization and adoption of online gambling in the United States. What’s more certain for now is that Fertitta knows how to make his own luck. (By Richard Beales)