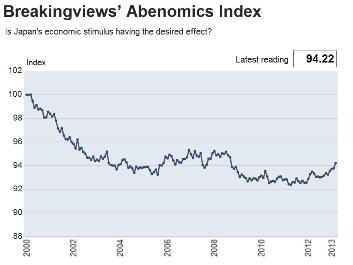 Prime Minister Shinzo Abe’s policies have beaten back the Japanese economy’s post-Lehman blues. Breakingviews’ Abenomics Index was at its highest level in March since September 2008. And that was before the Bank of Japan launched its bold money-printing pledge.

The index’s reading hit 94.22 in March, up from 93.77 in February, following revisions to historical data. The rise was broad-based: eight of the index’s ten components strengthened. The biggest contributor to the index’s fourth straight monthly gain was the drop in Japan’s bond yields during March. There were two weak spots: a drop in consumer prices and a slide in new housing starts.

The index is likely to have strengthened further following the BOJ’s surprise April 4 promise to double the monetary base in two years. The Tokyo Stock Exchange TOPIX index, one of the contributors to the index, has jumped by more than a fifth since the announcement.

The continuing slide in the Japanese yen, which recently passed more than 100 to the U.S. dollar for the first time in four years, will also help by improving the nation’s trade balance, which has been under stress because of Japan’s growing dependence on imported fossil fuels since the Fukushima disaster.

Still, pushing the gauge back to its January 2000 level of 100 will be a hard slog, and will require Japan to become more competitive. Abe’s early success in infusing life into the deflation-ridden economy bodes well for his ability to push for much-needed structural reform. Without it, the salutary effect of fiscal and monetary easing will eventually peter out.