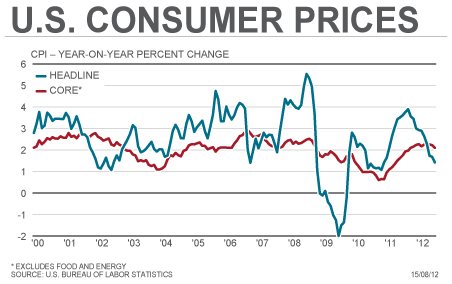 The CPI was unchanged in July, and up only 1.4 pct year-on-year. For monetarists, that’s surprising. Broad money supply is up 8 pct, and even without QE3 the Fed’s low interest rates make deficits easy to fund. These uncharted waters could force a rethink of economic theory.

Consumer prices were unchanged in July for the second straight month. Compared to last year, headline and core prices were up 1.4 percent and 2.1 percent, respectively.

Over the 12 months to July 30, M2 money supply rose by 8 percent, according to the St. Louis Federal Reserve, while so-called money of zero maturity rose by 7.5 percent. Nominal GDP in the second quarter of 2012 was 3.9 percent higher than a year earlier.