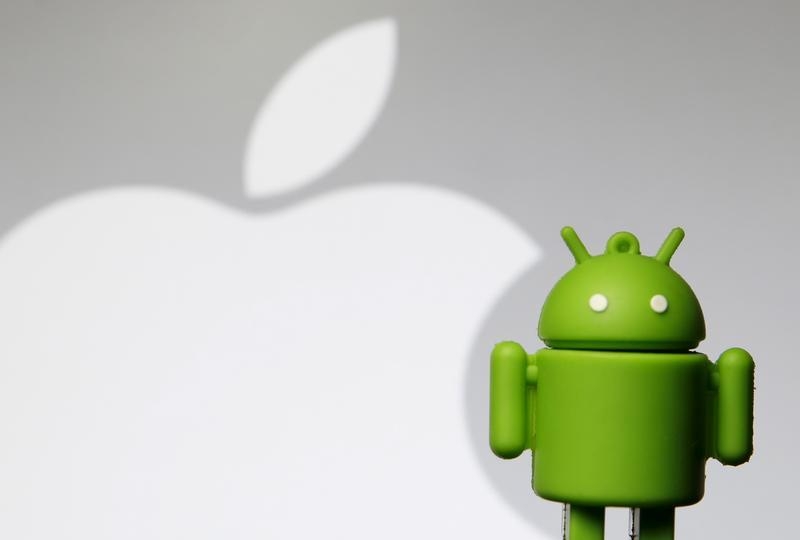 Alphabet could soon become the most valuable company in the world. The Google powerhouse traded on Friday morning with an equity value above $500 billion, less than 10 percent shy of the iPhone maker’s. Investors value the search firm’s earnings from rapidly growing digital advertising more than twice as highly as Apple’s in a saturating smartphone market. Wall Street, however, may be overlooking Alphabet’s risks.

Global smartphone sales growth slowed to 10 percent last year according to consultancy IDC. Reports of cutbacks at Apple suppliers suggest tepid demand for its latest phones. Analysts fear the company may struggle this year to match the 230 million or so handsets sold in the last fiscal year to September.

An oversupplied market could bring price wars, which in turn could hurt margins – and the iPhone accounts for about 60 percent of Apple’s revenue and a bigger chunk of profit. As a result, investors expect little growth in the company’s top line this year and are only paying about 10 times estimated 2016 earnings for the stock.

The mobile digital advertising market, meanwhile, should almost triple to nearly $200 billion globally by 2019, consultants at eMarketer reckon. Alphabet’s sales are forecast to grow about 15 percent this year. This wind at Alphabet’s back and the possibility that its self-driving cars, robots or medical endeavors pay off help explain why it commands a price-to-earnings multiple above 20 times.

A subpar earnings report from Apple next week, or a strong one from Alphabet the week after, could bring a new name to the top of the world’s most valuable companies list.

Investors are, however, prone to overconfidence in technology trends. Facebook is snagging more and more ad dollars. European antitrust authorities are circling. Moreover, some of Alphabet’s revenue comes courtesy of iPhone users: it cost Google $1 billion in 2014 to keep its search bar on the Apple device, Bloomberg reports based on transcripts of a court case.

Alphabet is far more reliant on internet advertising than Apple is on the iPhone. Ads bring in about 90 percent of the company’s revenue. Any hint of investor skepticism about that market could keep Apple at the top of the list.

Over the past 52 weeks, Alphabet’s market value has risen nearly 40 percent, while Apple’s has declined.

Apple is set to report earnings for its first fiscal quarter, the three months to December, on Jan. 26. Alphabet reports its fourth-quarter 2015 results on Feb. 1.

Google paid Apple $1 billion in 2014 to keep its search bar on the iPhone, according to a transcript of court proceedings from an Oracle copyright lawsuit against Google, Bloomberg reported on Jan. 21.