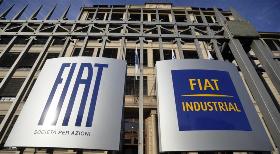 Fiat Industrial is merging with CNH, its U.S. subsidiary, and is set to become a Dutch-domiciled group listed in New York. This may herald a full takeover of Chrysler by Fiat Auto, with its listing moving across the Atlantic too. Italy may complain but it is largely to blame.

Fiat's logo's are seen at the main entrance of the Fiat headquarters in Turin January 12, 2011.

Italian truck and tractor maker Fiat Industrial announced a plan to merge with its farm equipment unit CNH Global on May 30.
The new group will be listed on the New York Stock Exchange, where CNH already trades, and have a secondary listing in Europe. It will be domiciled in the Netherlands. Currently Fiat Industrial, which owns 88 percent of CNH, is domiciled in Italy.
Investors in both companies will be given shares in the new group at a swap ratio based on market prices in March and April, before the matter was first raised publicly.
The deal will simplify further the group’s capital structure, following a conversion of its preference and savings shares into ordinary shares effective since May 21.
Italian leftist union leader Giorgio Airaudo told Reuters the deal pointed to the diminishing importance of Italy in the group’s global strategy. “It is obvious that the option is there that a similar move could involve Fiat [Auto] and Chrysler,” Airaudo said.
(Research by Christine Murray)
This item has been updated to clarify phrasing in the third and final paragraphs.