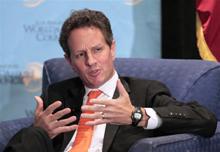 The Treasury secretary can rest a tad easier. He can now claim to have extracted the U.S. from its contentious $182 bln bailout of the insurer with a profit of $23 bln. But other Geithner legacies will weigh on his successor – notably an unreformed housing finance system.

US Treasury Secretary Timothy Geithner speaks during a panel discussion hosted by the Los Angeles World Affairs Council titled "The US and World Economies: An Overview" in Los Angeles, California July 31 2012. REUTERS/Mario Anzuoni

The U.S. Treasury said on Dec. 11 it had agreed to sell its remaining stake in American International Group <AIG.N> for $32.50 a share. The sale brings the government’s total profit on the $182.3 billion bailout to $22.7 billion, the Treasury said.

The Federal Reserve’s support of the giant insurer, which made huge losing bets on subprime mortgages in the run-up to the 2008 crisis, accounted for $17.7 billion of the gains. The Treasury made $5 billion on its common and preferred AIG stock, according to the government, and will continue to hold some warrants over AIG stock.