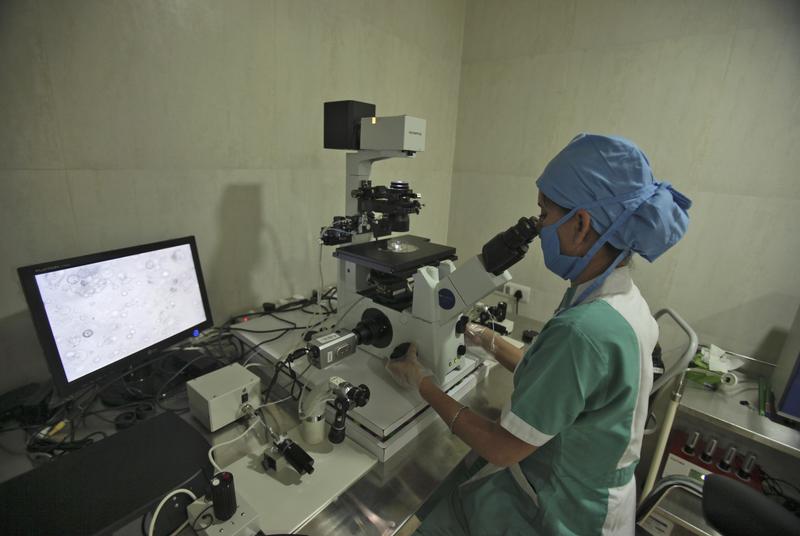 Buyout firm TPG is backing one of three rival offers valuing scandal-hit Fortis at up to $1.3 bln. Private services are in demand with rising incomes and an increase in lifestyle diseases set against New Delhi’s failure to provide decent healthcare. Medical tourism helps, too.

A nurse works on a micromanipulator machine (used for fertilization) at Fortis Bloom Fertility and IVF Centre inside the Fortis hospital at Mohali in the northern Indian state of Punjab June 13, 2013. A looming crisis in Asia as women delay giving birth, leading to low fertility rates that have dire implications for economic growth, is opening huge opportunities for the fast-growing in-vitro fertilisation (IVF) industry. India is currently dominated by Fortis Bloom Fertility and IVF Centre, part of the country's No.2 hospital chain Fortis Healthcare Ltd, and a joint venture with Spain's IVI Max Reproductive Medicine and part of healthcare group Max India Ltd. REUTERS/Ajay Verma (INDIA - Tags: HEALTH SOCIETY) - GM1E96D1JCE01

India’s Fortis Healthcare has declined to engage with IHH Healthcare over a potential takeover offer valuing the hospital operator at up to 83 billion rupees ($1.3 billion), the Malaysian company said on April 16.

On April 11, IHH Healthcare proposed to pay up to 160 rupees per share for Fortis, subject to due diligence, Fortis said. That is potentially more than a revised and binding 155 rupees per share offer from rival Indian-hospital operator Manipal Hospital Enterprises, backed by U.S. buyout firm TPG.

Fortis received a separate offer on April 12 to inject up to 12.5 billion rupees ($191 million) of cash into the business from two prominent Indian investors, Sunil Munjal's Hero Enterprise and the private investment arm of the Burman family, which backs consumer goods producer Dabur India.

A combination of Fortis' hospitals business with Manipal would create the largest private hospital owner by revenue and EBITDA in the country, Fortis noted in a stock exchange filing.

Fortis is under investigation by India's Serious Fraud Investigation Office and the Securities and Exchange Board of India for financial fraud. The company's founders, Malvinder Singh and Shivinder Singh, have denied allegations that they took funds from Fortis.

The brothers now own less than 1 percent of the business after lenders seized their shares.