No time to celebrate 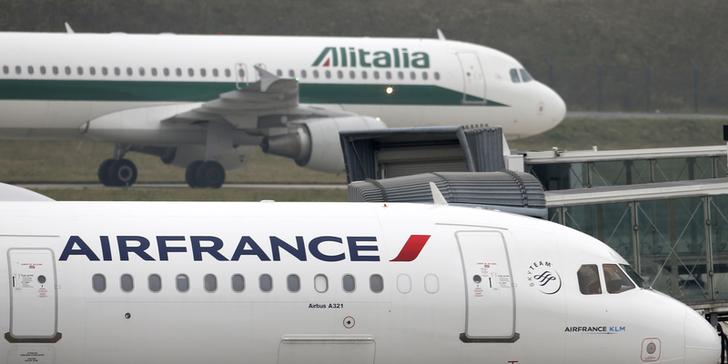 The French carrier has reported positive full-year earnings after four years of losses. Yet the improvement is owed partly to a lower fuel bill. Costs under Air France’s control remain bloated and returns still barely meet its cost of capital.

An Alitalia plane passes an Air France plane on the tarmac of Charles de Gaulles International Airport in Roissy near Paris, January 8, 2013.

Franco-Dutch airline Air France-KLM beat forecasts with a return to positive operating profit, pushing the stock close to a nine-month high on Feb. 18.

The carrier achieved operating profit of 816 million euros, compared with an operating loss of 129 million in 2014, it said in a statement. This beat the average forecast of 544 million in a Reuters poll.

Air France-KLM also said it lowered its net debt to 4.3 billion euros at the end of December from 5.4 billion a year earlier, and pledged a “further significant reduction” this year.

The airline forecast a cut of between 0.8 percent and 1.2 percent in unit costs in 2016, and free operating cashflow generation after disposals of between 0.6 billion and 1.0 billion euros in 2016, against 606 million last year.

The company cautioned, however, that pressure on ticket prices from increased competition would eat into the benefits of cheaper fuel this year, although it maintained its medium-term financial targets.