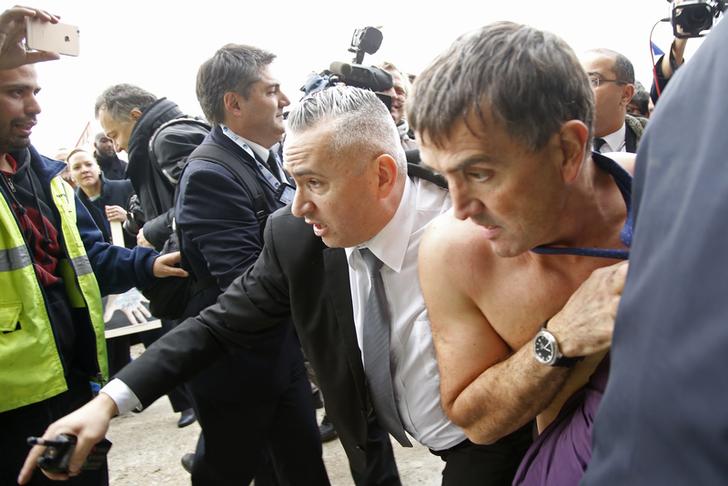 The assault on the troubled national airline’s HR director isn’t the first French use of unconventional negotiating techniques. It’s not totally irrational, as the government often yields to direct action. But with its swollen cost base, Air France can’t afford to be cowed.

A shirtless Xavier Broseta (R), Executive Vice President for Human Resources and Labour Relations at Air France, is evacuated by security after employees interrupted a meeting with representatives staff at the Air France headquarters building at the Charles de Gaulle International Airport in Roissy, near Paris, France, October 5, 2015.

Air France is in a fragile condition but renationalisation is not on the agenda, French Transport Minister Alain Vidalies said on Oct. 6.

The airline’s human resources and labour relations chief, Xavier Broseta, was left with his shirt ripped off and his tie hanging from his neck. Two security guards, one of whom was knocked out and did not recover consciousness for several hours, were hurt in the fracas, an Air France spokesman later said.

Broseta and Air France Chief Executive Frederic Gagey had been outlining a cost-cutting plan, described by the company as “Plan B” after it failed to persuade its pilots to accept a less radical one earlier this year.