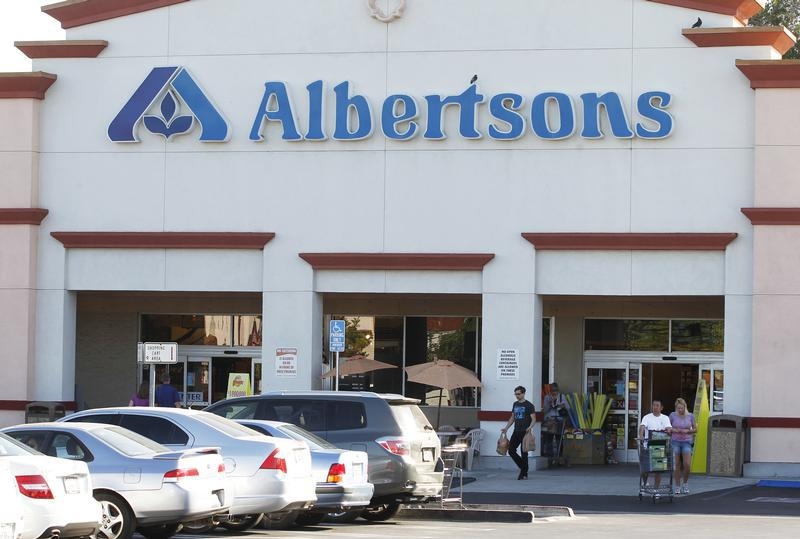 Albertsons may have a limited investment shelf life. The U.S. grocer is seeking up to $2 billion in an initial public offering that would value the enterprise at a premium to rival Kroger, even though Albertsons is larded with some $11 billion in net debt following a nine-year shopping spree under buyout firm Cerberus. Deal-related cost savings will help for now, but longer-term growth may be as wobbly as a trolley with a bad wheel.

At the high end of the stock price range disclosed on Friday, Albertsons’ equity would be worth about $12.4 billion. The IPO represents the culmination of an acquisition binge that began back in 2006 when Cerberus and some partners bought 655 Albertsons stores during a three-way carve-up. In 2013, the private equity group absorbed the rest of Albertsons and some other chains. In January, the store count more than doubled with the $9.4 billion purchase of Safeway.

The cash being raised should help Albertsons cut its debt of 4.7 times EBITDA to closer to four times. That is still high compared to peers. Kroger’s net debt clocks in at two times EBITDA, while upscale Whole Foods and discounter Costco both operate on a net-cash basis. Of the major U.S. grocers tracked by Thomson Reuters, only Supervalu is similarly indebted, and its shares trade at a big discount for the industry.

Albertsons does have two big things going for it. First, it expects to wring $800 million of annual cost savings from the Safeway deal over the next three years. Management also has shown a knack for turning around weaker stores, which has translated into impressive growth. Sales at stores open for at least a year increased by more than 7 percent last year, excluding the Safeway stores, beating both Kroger and Whole Foods, which grew at closer to 4 percent.

That may be enough to encourage investors to stock up on the IPO. In the fiercely competitive grocery business, however, it’s hard to sustain a competitive advantage. Four years ago, for example, Whole Foods was growing so-called same-store revenue at nearly 9 percent as customers got comfortable paying higher prices for organic goods. The sales backslide has eroded the company’s premium valuation. For that reason, stock buyers should be prepared for growth at Albertsons to have an expiry date, too.

Albertsons, the second-largest U.S. grocery chain, said on Oct. 2 it expects its initial public offering to price at between $23 and $26 a share, valuing the company’s equity at up to $12.4 billion.

The 2,200-store company, which last year bought rival Safeway for $9.4 billion, is selling 65.3 million shares in the IPO. It may raise as much as $2 billion, including an extra 9.8 million share allotment to investment banks known as a greenshoe.

Private equity firm Cerberus Capital Management and partners Klaff Realty, Schottenstein Stores and Lubert-Adler Partners will own just over 80 percent of the company after the IPO, according to documents submitted to regulators. Citigroup, Morgan Stanley, Goldman Sachs and Merrill Lynch, Pierce, Fenner & Smith are underwriting the share sale.

Albertsons said it would use the proceeds from the offering to pay down debt.