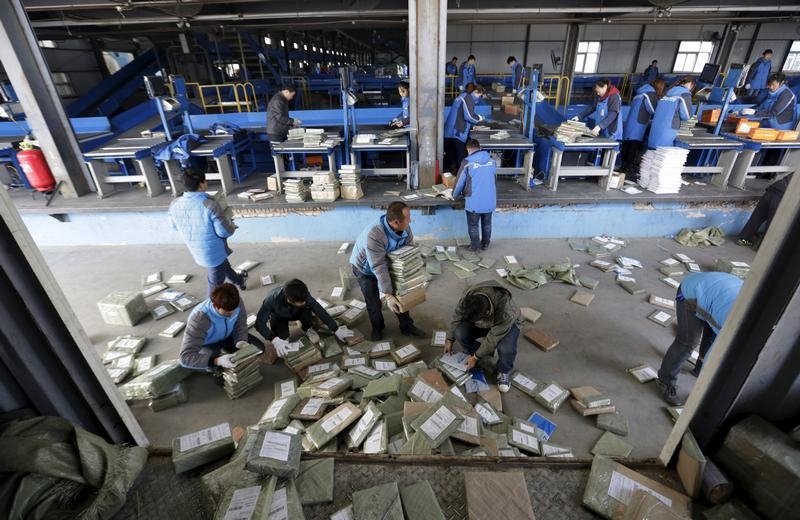 Alibaba’s courier is aiming high in its New York flotation. ZTO Express wants to raise up to $1.3 billion. Sales are soaring, thanks to China’s e-commerce boom, but rival couriers are also scaling up. ZTO lacks the market dominance or margins to justify an Alibaba-style premium valuation.

At the midpoint of the price range, ZTO will be valued at $12.8 billion. That’s 35 times what analysts at Haitong Securities expect the courier service to earn this year. To compare, New York-listed Alibaba trades at 32 times expected earnings for the year to end-March.

True, growth has been impressive. The Shanghai-based company is already a top player in the world’s largest express-delivery market, thanks to Alibaba and JD.com’s shopping platforms. Last year, ZTO handled almost 3 billion packages, up from 1.8 billion the previous year. Revenue jumped 71 percent year on year to $639 million in the first half of this year. Continued fast growth could justify a significantly richer current-year valuation than Alibaba.

But unlike in the United States, where UPS and FedEx dominate, China’s delivery sector is crowded. The top five companies have just 60 percent of the market. And all are raising capital: ZTO’s four rivals, including Alibaba-backed YTO Express, plan to list via reverse mergers back home. That would then allow them to raise fresh equity funding from mainland investors.

ZTO has an edge. The company, led by founder Lai Meisong, has been adept at keeping a lid on costs, even as wages increase. Like peers, it relies on local franchisees to deliver packages. But ZTO’s focus on better fleet management and warehouse automation has helped lift adjusted EBITDA margins to 30 percent last year, from 17 percent in 2014.

That’s impressive for a transport company – but still a far cry from Alibaba’s steady 50 percent adjusted EBITDA margins. And there is also the risk that rivals, fortified with new war chests, could launch battles for market share that damage sales or margins. At the current premium, ZTO fails to deliver.

Employees work at a sorting centre of Zhongtong (ZTO) Express ahead of the Singles Day shopping festival, Chaoyang District, Beijing, November 8, 2015. On China's giant Singles Day internet shopping festival, the country's delivery firms are stretched so thin that they are looking for tie-ups, listings and new investors to husband their resources. E-commerce has been a huge boon to the logistics industry, but the ever-bigger Singles Day, run by leading online market company Alibaba Group Holding Ltd on Nov. 11 every year, exacerbates the industry's twin dilemmas of cut-throat competition and rising labor costs. With low barriers to entry, express couriers proliferated rapidly over the past decade to more than 8,000 firms, squeezing profit margins to about 5 percent, down from 30 percent 10 years ago, according to analysts. Picture taken November 8, 2015. To match CHINA-SINGLESDAY/LOGISTICS REUTERS/Jason Lee - RTS6DLM

Chinese logistics company ZTO Express plans to raise up to $1.3 billion in an initial public offering, according to an updated prospectus filed on Oct. 14.

The New York Stock Exchange IPO will be the biggest in the United States this year and the biggest U.S. flotation by a Chinese company since Alibaba's debut in 2014.

ZTO will use the proceeds to buy trucks, land, facilities and equipment and for "general corporate purposes". Morgan Stanley and Goldman Sachs are the lead underwriters.