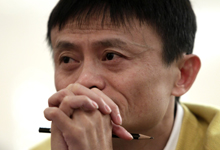 Alibaba is lifting its veil to reveal both good and bad sides. The e-commerce giant has released more information ahead of its highly anticipated initial public offering. Though some of the disclosures will persuade prospective investors its business is relatively robust, the rapid shift by users to mobile phones is squeezing margins.

Start with the good news. The filing shows that Alibaba’s virtual shopfront is growing much faster than its online marketplace. The value of transactions on Tmall, which is somewhat similar to Amazon from a user’s perspective, doubled in the year to March. The larger Taobao, which resembles eBay, boosted transactions by 42 percent.

The breakdown matters because of Chinese online shoppers’ growing love of smartphones. More than a quarter of transactions on Alibaba’s platforms in the first three months of the year were carried out on a mobile device, up from just over 10 percent a year ago.

The shift is a challenge for Taobao, which doesn’t take a direct cut of the goods sold on its platform, but charges merchants for advertising and preferential placement. That’s harder to do on a small screen. Alibaba’s results show the scale of the challenge: total revenue in the March quarter was 2.2 percent of the value of total transactions. For mobile sales, though, this “monetisation rate” was less than 1 percent.

It would be a mistake to read too much into a single quarter, especially one that includes the Chinese New Year holiday and comes after November’s “Singles’ Day”, when online shopping volumes spike. Nevertheless, investors were clearly disappointed: shares in Yahoo and SoftBank, which own large stakes in Alibaba, both fell.

Alibaba also had little to offer critics of its corporate governance structure. Though it disclosed the names and titles of the 27 members of its controlling partnership, it offered no further details. The proposed quartet of non-executive directors also underwhelmed. Former Goldman Sachs vice-chairman Michael Evans is arguably the only candidate who has to worry about his reputation with institutional investors.

The latest disclosures may blow some of the froth off the more optimistic valuations of Alibaba. However, the company is bound to lift the veil a bit further in the coming months. That gives investors some time to decide whether to buy into the IPO.

Alibaba on June 16 revealed the members of its 27-person partnership and board of directors, while disclosing that its growth has slowed from the red-hot pace of recent quarters.

In an updated prospectus ahead of its initial public offering, Alibaba revealed the names of the four independent directors who will join its board. They are former Hong Kong Chief Executive Tung Chee-hwa, Yahoo founder Jerry Yang, J. Michael Evans, former vice-chairman of Goldman Sachs, and Walter Teh Ming Kwauk, a senior consultant at Motorola who previously served as a director of Alibaba.com when it was listed in Hong Kong.

Alibaba also reported that its net income in the quarter ended March climbed 32 percent to 5.5 billion yuan ($893 million). Revenue was up 39 percent to 12 billion yuan, compared to a 62 percent increase in the previous quarter.

The company also disclosed for the first time the share of transactions accounted for by its Taobao online marketplace and Tmall e-commerce sites. Taobao accounted for 69 percent of transactions by value in the three months to March, down from 76 percent in the same period a year earlier.