It’s not a bank 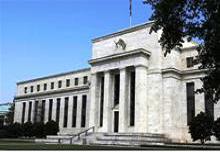 The Federal Reserve and other central banks with bloated balance sheets will book losses when interest rates rise. But the red ink can’t bleed them dry. Ben Bernanke and other policymakers need to hammer this point home to keep away economically unnecessary political trouble.

U.S. Republican Senator Bob Corker sent a letter to Ben Bernanke asking the Federal Reserve chairman to explain the policy implications of a large central bank balance sheet. The letter followed an exchange between Corker and Bernanke during his semiannual congressional testimony on Feb. 26.
In 2012, the Federal Reserve paid $88.9 billion of its estimated net income to the U.S. Treasury.
In January, the Fed released a study on the effect of rising interest rates on its balance sheet and earnings. In a worst-case scenario, the economists found losses would reach $125 billion if interest rates increased by 3 percentage points. In that case, remittances to the Treasury would cease for six-and-a-half years.