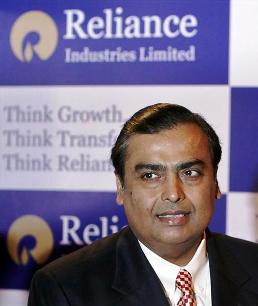 Tales of the Ambani brothers’ mixed fortunes tell the same story – declining opportunities for investment in India. Mukesh may be cash-rich while Anil is in stark need of funding. Although some think that has the makings of a reconciliation between the two, that’s unlikely. Mukesh would rather buy his own shares than those of his brother.

Mukesh Ambani’s Reliance Industries is considering a share buyback, in which Mukesh himself is thought unlikely to participate. The firm has net cash of around $10 billion. Mukesh has been linked to numerous acquisitions including an investment in his brother’s Reliance Communications. But the buyback announcement suggests a dearth of sound investment opportunities for India’s richest man. That’s not good news for the Indian economy, reinforcing the impression that political paralysis is stifling investment. Nor is it good news for Anil.

Reliance Communications, whose share price nearly halved last year, is saddled with around $6 billion in net debt. Anil has been trying to sell his telecoms tower unit for almost two years. A deal with GTL Infrastructure collapsed in 2010. In November he entered into negotiations with a private equity consortium of Blackstone and Carlyle. That deal was expected to complete in December but so far nothing has been forthcoming, though it may eventually fetch up to $3 billion.

In the absence of hard cash from the sale of his infrastructure, Anil has this week raised funding from several Chinese banks to refinance $1.18 billion of outstanding convertible bonds. Sources said on Wednesday he also intends to raise up to $1.5 billion through an IPO in Singapore of his undersea cable unit.

Mukesh may feel that his own business has better prospects than his brother’s. Perhaps he’s hopeful that the current problems in ramping up production at India’s vast KG-D6 gas basin will ease once the expertise of BP, with which he formed a joint venture last year, kicks in. He may be happy to let the public markets, private equity and Chinese lenders bail out his brother while increasing his percentage stake in Reliance Industries by buying back other shareholders’ stock.

But neither story tells paints a hopeful outlook. Indeed, the tale of the Ambanis is a microcosm for corporate India: some businesses are struggling to unwind excessive leverage while others can’t find productive uses for their surplus cash.

Reliance Industries is considering a share buyback, the company said on Jan. 18, sending its shares up as much as 4.4 percent. Shares in the energy focused conglomerate controlled by Mukesh Ambani, India’s richest man, fell 35 percent in 2011.
The firm’s cash reserves stood at $14 billion in the quarter ended Sept. 2011 when it had outstanding debt of $15.1 billion. Cash may rise to $25 billon by March 2012, according to UBS, largely due to the sale of a 30 percent stake in its 21 oil and gas blocks to BP in August 2011 for over $7 billion.
Meanwhile, Anil Ambani’s Reliance Communications is looking to raise up to $1.5 billion through an initial public offering in Singapore of its undersea cable unit, Reuters reported on Jan 18.
Reliance Communications has also raised funding from several Chinese banks to refinance $1.18 billion of outstanding foreign currency convertible bonds, the firm said on Jan. 17.