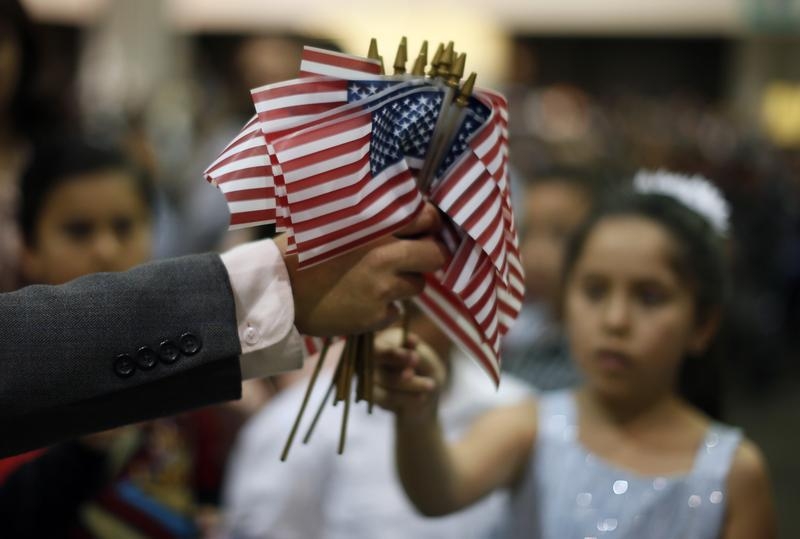 Nearly $10 bln gets spent each year educating undocumented children legally in public schools. Two valedictorians and a Supreme Court ruling shine a light on the human capital being wasted. With employers braying for skilled workers, fixing this policy could deliver big returns.

A man hands out U.S. flags at a naturalization ceremony in Los Angeles, California, December 17, 2013.

The president’s plan was designed to let about 4 million people with children who are U.S. citizens or lawful permanent residents get into a program – known as Deferred Action for Parents of Americans and Lawful Permanent Residents, or DAPA – that shields them from deportation and provides them with work permits. His plans would have also expanded Deferred Action for Childhood Arrivals, which was originally enacted in 2012 to provide a two-year renewable reprieve from deportation and a work permit for qualified undocumented children.

By deadlocking 4-4, the court leaves in place a lower-court ruling that stopped the executive action.

“Today’s decision keeps in place what we have maintained from the very start: one person, even a president, cannot unilaterally change the law,” said Texas Attorney General Ken Paxton, whose Republican-led state spearheaded the challenge.

Ibarra is due to attend the University of Texas at Austin in the fall while Martinez is set to attend Yale University on a full scholarship. Ibarra qualified for and maintains a so-called deferred action status. Martinez arrived too late to benefit from the program and has been waiting for seven years for her citizenship.