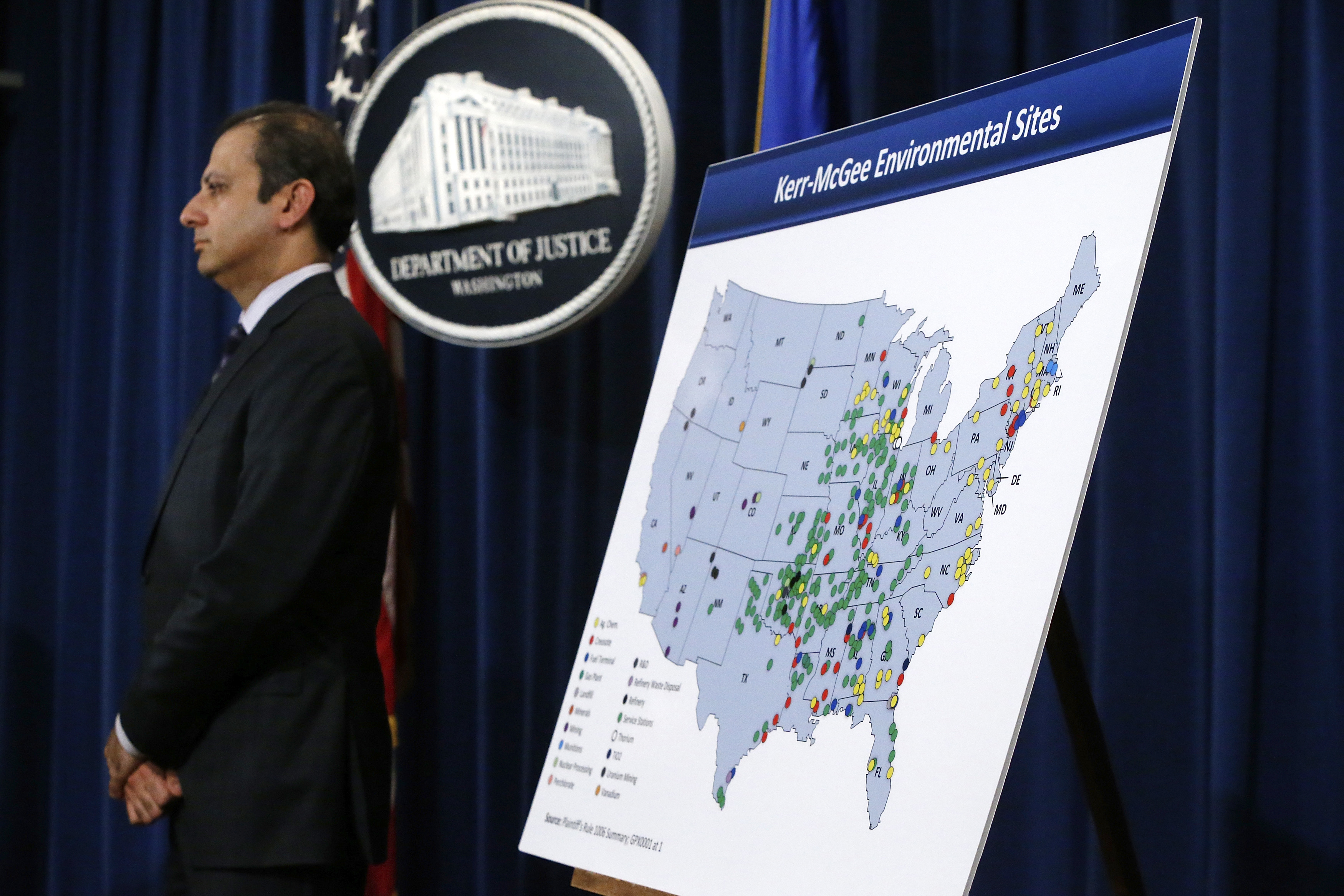 Stock investors seem to have a firm grip on Anadarko Petroleum’s toxic waste settlement. The record $5.15 billion settlement on Thursday, covering years of environmental claims, was at the low end of a court-defined range which had a midpoint of $9.8 billion. The 15 percent jump in the oil company’s market capitalization is mostly explained by those numbers. And it brings Anadarko’s 12-month stock performance nearly back in line with the S&P 500 after a bumpy ride.

The deal ends a messy legal wrangle for Anadarko and its Kerr-McGee subsidiary. The chemicals unit, acquired by Anadarko in 2006, was accused of trying to sidestep its environmental responsibilities by dumping them onto Tronox, a titanium dioxide business that was spun out of the group in 2005 and later went bankrupt. A litigation trust, set up when Tronox emerged from Chapter 11, went after Kerr-McGee for compensation.

The surge in Anadarko’s shares added $6.4 billion of market value. A bankruptcy judge in December said the company should pay something between $5.15 billion and $14.46 billion. Taking the midpoint as a guide to investor expectations, Anadarko was spared about $5 billion of penalties, accounting for much of the rally. The extra could be seen as a mark of investors’ relief the legal overhang is now gone, or maybe a reflection of the fact that some may have been discounting as much as $16 billion for the settlement, as Jefferies reckons.

After Thursday’s gain, Anadarko’s shares are up 18 percent over the past 12 months. Having languished for months, their performance is almost back in line with the broader S&P 500 Index, which has gained 22 per cent over the period. One interpretation is that investors reckon that for Anadarko, which also paid $4 billion in 2011 to settle BP’s claims over the Gulf of Mexico oil spill, huge legal charges are little more than a cost of doing business.

U.S. Attorney for the Southern District of New York Preet Bharara stands beside a map during an announcement of a settlement with Anadarko Petroleum Corp at the Justice Department in Washington April 3, 2014. Anadarko Petroleum Corp and its Kerr-McGee unit will pay $5.15 billion (3.10 billion pounds) to resolve environmental cleanup claims stemming from the 2009 bankruptcy of paint materials maker Tronox, the biggest environmental bankruptcy settlement on record. REUTERS/Jonathan Ernst

U.S. energy company Anadarko Petroleum said on April 3 it would pay $5.15 billion to end litigation over cancer and other health problems across the United States caused by pollution from uranium deposits, wood creosote and rocket fuel processing.

The agreement, the biggest environmental bankruptcy settlement on record, resolves environmental cleanup claims stemming from the 2009 bankruptcy of paint materials maker Tronox brought by a trust for governments, Indian tribes and individuals.

In December U.S. Bankruptcy Judge Allan Gropper of New York said Kerr-McGee, which Anadarko bought in 2006, knew that the spinoff of titanium dioxide unit Tronox would harm the business. At the time, Gropper said Anadarko should pay from $5.15 billion to $14.46 billion in cleanup costs.

Anadarko later said its liability could be as little as $850 million.

The company’s shares jumped 14.5 percent by the close to trade at $99.02 apiece, a market value gain of around $6.4 billion. Taking that gain into account, the stock has risen 18 percent in the past 12 months, just shy of the 22 percent gain recorded by the S&P 500 Index.