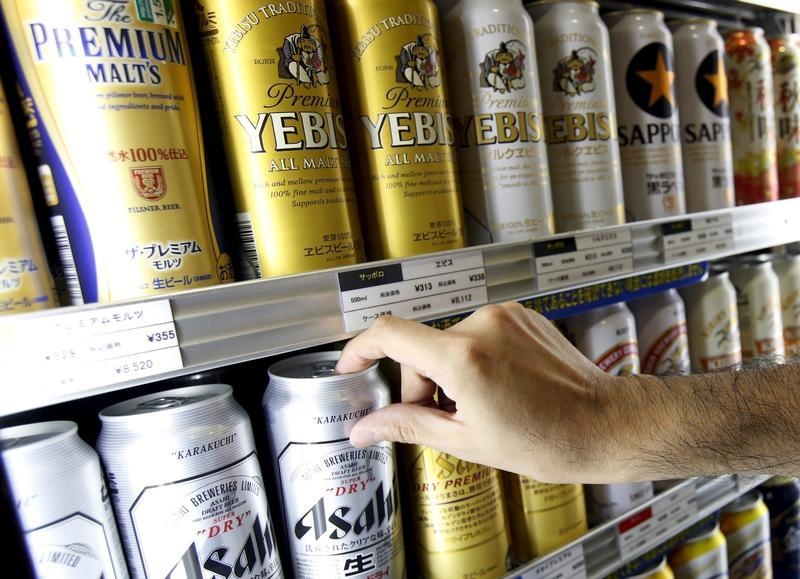 Anheuser-Busch InBev is getting the better of Japan’s Asahi on a trio of middling beer brands. While the $2.9 billion price tag is a bit lower than expected, the Japanese brewer’s acquisition of Peroni, Grolsch and Meantime clocks in at what may be some 25 times one measure of operating profit. It’s only justifiable under the demographic logic of the buyer’s shrinking home country.

It could be worse: Japan’s Yomiuri newspaper reported last month that the $14 billion Japanese brewer was limbering up to pay as much as $3.4 billion for the brands, the sale of which is intended to ease antitrust clearance for AB InBev’s takeover of SABMiller. Investors pushed the value of Asahi’s shares down 8 percent on Wednesday in Tokyo, before the deal was announced.

Even at the lower price, Asahi is paying up for some so-so businesses. Financials provided by the acquirer show combined earnings before interest and tax at Italy’s Peroni and the Netherlands’ Grolsch fell by more than a quarter to around 50 million euros in the fiscal year ended in March 2015. Hold that figure steady, add in import sales of the brands growing at 30 percent and assume tiny but fast-growing UK craft brewer Meantime’s operating profit doubles, and it pegs the value of Asahi’s offer at roughly 25 times the combined EBIT, well above the 15 times Asahi itself fetches.

Using different metrics, the deal looks less frothy. Leave out depreciation and amortization, and Asahi is paying around 15 times the midpoint of various estimates of the three brands’ EBITDA for the year ending in March. That’s still higher than Asahi’s own 10 times EBITDA multiple. And the Japanese buyer’s tiny footprint in Europe means there are few obvious opportunities to wring out cost savings.

True, Japanese companies have a lower cost of capital than many Western counterparts. It’s also plausible that buying a clutch of European brands with decent cachet – SABMiller considered them among its premium marques – and distribution could eventually help Asahi boost sales of its own brand outside its aging and economically stagnant home market.

(This item corrects operating profit figures in paragraphs one and three to include contributions from the Miller Brands (UK) division also being sold to Asahi.)

Japan’s Asahi has offered to buy SABMiller’s Peroni, Grolsch and Meantime beer brands for 2.55 billion euros, or about $2.9 billion, Anheuser-Busch Inbev said on Feb. 10. The offer, if accepted, is conditional on AB InBev closing its planned acquisition of SABMiller.

Japanese beer of brands such as Asahi, Kirin and Suntory are placed in a fridge at a store in Tokyo Octber 15, 2015. The planned $100 billion merger of Anheuser-Busch InBev and SABMiller will be a wake-up call to the overseas ambitions of Japanese brewers, which are struggling to grow at home in a saturated market with a shrinking population. Japanese beer makers including Asahi Group Holdings and Kirin Holdings Co hold more than 90 percent of their domestic market, but are tiny globally despite long-standing pledges to do more overseas as Japan's beer market slows. REUTERS/Issei Kato

Japan’s Asahi has offered to buy SABMiller’s Peroni, Grolsch and Meantime beer brands for 2.55 billion euros, or about $2.9 billion, Anheuser-Busch Inbev said on Feb. 10. The offer, if accepted, is conditional on AB InBev closing its planned acquisition of SABMiller.