Ghost in the machine 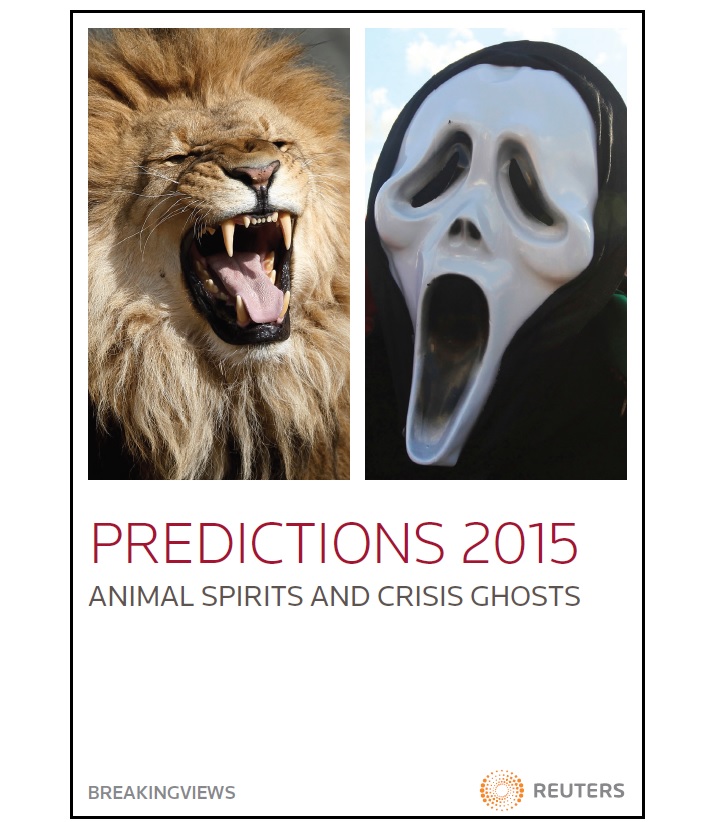 Welcome to Reuters Breakingviews’ annual attempt to set the financial scene for the year ahead. While we like nothing better than to be right, our goal is – as always – to provide insightful, entertaining and provocative ideas in the pithy style to which our readers are accustomed.

The subtitle of Predictions 2015, “Animal Spirits and Crisis Ghosts,” reflects what our writers see as a new level of tension between two conflicting sentiments.

On the one hand, stocks and other asset prices have in some cases several years of solid, but not yet outlandish, increases under their belts. On the other, regulations and policies inspired by the global financial crisis in 2008 continue to hold back certain industries, in particular banking where watchdogs are focused on maintaining bigger, and therefore more expensive, capital cushions.

Meanwhile, the end – most notably at the U.S. Federal Reserve – of a long period of very loose monetary policy represents one kind of crisis ghost that many in financial markets may not want to see disappear into the ether.

The past year has also brought new concerns, including a dangerous political and military standoff between Russia and the West over Ukraine. We predict that this and other shifts involving China and the United States will erase any vestiges of a post-Cold War peace dividend, with defense spending likely to ratchet higher and some risk of an arms-race spiral.

The oil price will stay well below $100 despite the geopolitical tensions in oil-producing parts of the world, but that may itself provoke other kinds of trouble. The U.S. economy will lead growth in the developed world, supporting a strong dollar which could cause pain elsewhere.

The UK’s intriguing general election, in which, unusually, five political parties could all matter, could to go to a Labour-led coalition. Meanwhile, Japan is the monetary policy exception, and we predict Tokyo’s may be the first regime truly to test the efficacy of almost literally dropping banknotes from the skies. China faces the twin challenges of slowing economic growth and a still festering bad-debt problem.

We predict more telecoms consolidation in Europe, probably led by BT, and that the biggest globally active private equity firms, flush with cash but struggling to compete with corporate buyers in 2014, will have to compromise on returns if they want to use up their dry powder.

Dealing with activist investors has become routine for corporate chiefs in recent years. Coca-Cola, PepsiCo and IBM could see more of it. Cage-rattling may at last reach the U.S. banking sector in 2015, perhaps even Citigroup or JPMorgan, testing Janet Yellen’s Fed in its capacity as the industry’s top overseer. Globally, we suspect one or more of the lenders now in the too-big-to-fail category will try to become smaller.

A big cybersecurity breach is something else at the top of executives’ minds in the financial sector and elsewhere after hacks at JPMorgan and Sony raised the profile of this risk. We argue that cyber-insurance is one related industry that will come of age as a result.

We also offer predictions referencing Carlos Slim’s America Movil, Morgan Stanley, Bank of America, Alibaba, General Motors and others. We trust some of our ideas prove prescient, as we were for example in our data-driven prediction that Germany would win the soccer World Cup last year. But above all, we wish all our readers a happy and prosperous 2015, aided – we hope – by Breakingviews.