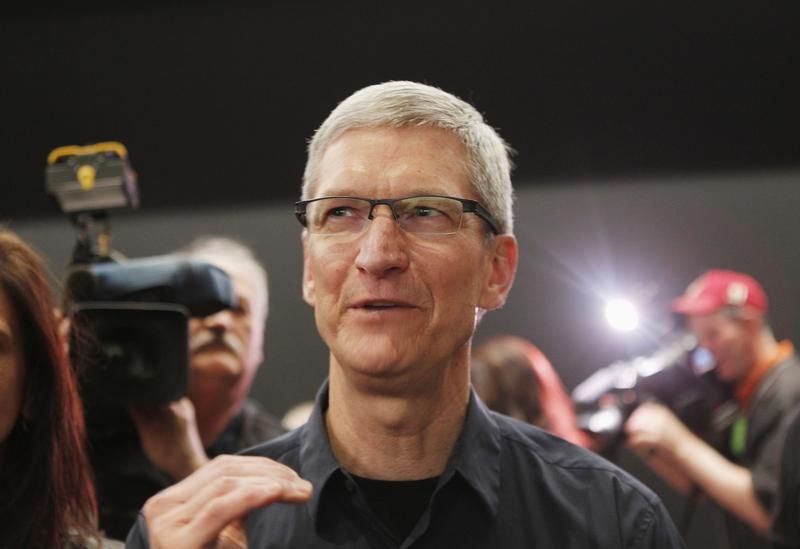 Apple is on track to become the biggest company ever – again. The iPhone maker’s $615 billion market capitalization, up more than 7 percent since last Friday’s close, is approaching its own peak of two years ago, which in turn eclipsed Microsoft’s on the eve of the 2000 bust. Apple’s latest runup, fueled by new iPhones and a new payments service, may fizzle before it hits a new record. But if it does get there, there’s no dot-com fantasy math involved.

Chief Executive Tim Cook, the man enlisted to fill the shoes of the late co-founder Steve Jobs in August 2011, presided over Apple’s last valuation peak during his first year or so on the job. A subsequent slide swiftly cut Apple’s market capitalization almost in half. Even without yet launching a new category-killing product, Cook has since helped engineer new stock-price highs. With Apple’s share count falling on account of regular buybacks, though, it is taking longer for the company’s total market value to surpass its previous $658 billion peak.

Apple last month released updated, larger iPhone models, which have been flying off the shelves. It also unveiled a Watch device, available early next year, and this week launched the Apple Pay service, which may prove the bigger game-changer.

Whether or not investors continue to push Apple shares higher, however, there should not be any danger of what happened to Microsoft’s stock soon after it topped $600 billion just before the technology surge of the late 1990s came to a crashing end. Apple’s last 12 months of sales tot up to $183 billion, almost 10 times the $20 billion Microsoft collected in the year to June 1999.

Apple now reports about five times as much annual profit as the software giant reported that same year. The Cupertino, California-based gadget producer also trades on a price-to-earnings ratio of about 16 times, a more sober multiple than the S&P 500 Index’s 18 times and a fraction of Microsoft’s multiple in 1999.

Despite that relatively modest ratio, the company registers not only as 3.6 percent of the U.S. S&P 500 universe, but also 1.7 percent of the FTSE All World Index. With the right new products, Apple could keep setting records. It’s still a likely candidate to become the world’s first trillion-dollar enterprise.

Apple’s stock price closed at $104.83 a share on Oct. 23, up 7.3 percent since Oct. 17, bringing the company’s market capitalization to $615 billion. The previous record for any company is $658 billion, set by Apple in September 2012. Based on 5.87 billion shares outstanding, the company’s valuation would reach that record at about $112 a share, a further increase of about 7 percent.

Apple’s stock price closed at $104.83 a share on Oct. 23, up 7.3 percent since Oct. 17, bringing the company’s market capitalization to $615 billion. The previous record for any company is $658 billion, set by Apple in September 2012. Based on 5.87 billion shares outstanding, the company’s valuation would reach that record at about $112 a share, a further increase of about 7 percent.