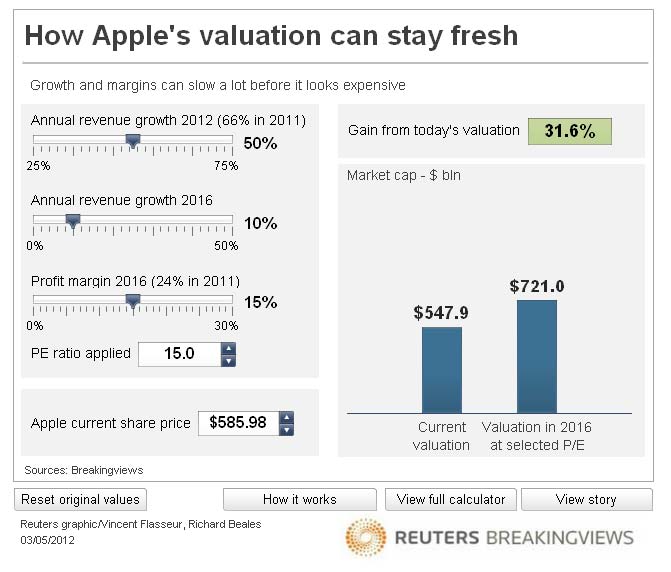 At about $550 billion, Apple’s market capitalization is mind-boggling. But for a company growing as quickly as it is, the iPhone maker trades at an absurdly low 12 times forecast earnings for the year to September. A new Breakingviews calculator shows why even cautious shareholders shouldn’t worry: even if growth and margins decline improbably fast, Apple should still be worth far more in 2016.

Companies in the S&P 500 index are collectively priced at about 14 times forecast 2012 earnings, given those earnings are expected to be about 7 percent higher than in 2011, according to Standard & Poor’s. Fast-growing companies usually trade at higher multiples. Bizarrely, investors award Apple a lower price-to-earnings ratio than the index even though the company’s bottom line almost doubled in the first calendar quarter of this year from the year before.

Strip out Apple’s $110 billion of cash at the end of March, and the multiple for the business looks even more anemic, at around 10 times. If current growth trends persist, it’s not hard to justify a $1 trillion valuation.

But give the skeptic his due. Suppose Chief Executive Tim Cook can’t sustain Apple’s better than 50 percent annual revenue growth, and competitive pressures quickly squeeze its profit margin down from the roughly 25 percent achieved recently. What if growth slows to a modest 10 percent in Apple’s financial year to September 2016, and the company’s profit margin drops to 15 percent?

Well, things still wouldn’t look too bad. Even assuming top-line growth declines faster in the earlier years, Apple would earn about 10 percent more in 2016 than the $44 billion analysts expect this year. With more pedestrian growth than currently, Apple would be seen as a more normal company. Attach the long-term average S&P 500 price-to-earnings ratio of about 15, and it would be worth some $720 billion.

Of course, Apple also would have stockpiled more cash by then, too. And technology companies have over the last 15 years traded on average at higher, not lower, PE ratios than the norm. So that valuation in 2016, like today’s, might look conservative. And apart from a 32 percent capital gain, investors would have collected the company’s recently announced dividend payouts along the way. Even with ultraconservative assumptions, Apple doesn’t look likely to go rotten any time soon.

How Apple's valuation can stay fresh