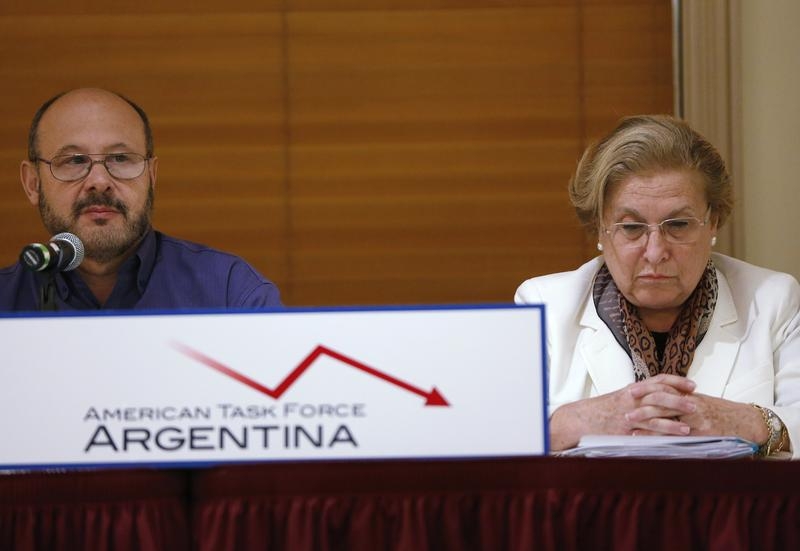 Two cases challenge the hedge fund’s ability to work around U.S. laws that shield the country’s assets. The court is hearing one of them as it mulls another on paying debt-swap holdouts. Upcoming arguments in the first may reveal how creative collection plans fare in the second.

Horacio Vazquez (L), 56, from Buenos Aires, speaks while Eva Geller, 66, from Uruguay, looks down with other pensioners during a news conference organized by the American Task Force Argentina denouncing Argentina's failure to meet bond payments in New York January 29, 2013. The news conference was held in advance of oral arguments before the U.S. Second Circuit Court of Appeals on the landmark sovereign debt default case, NML v. Argentina, on February 27. The outcome of this case affects tens of thousands of mostly Argentines, Europeans and Americans who lost money on Argentine bonds when the regime defaulted in 2001. REUTERS/Shannon Stapleton

The U.S. Supreme Court on April 21 will hear arguments in Argentina’s appeal of a lower-court decision allowing Elliott Associates affiliate NML Capital to discover how the nation moved assets in and out of two U.S. bank accounts. The hedge fund won a court judgment to collect on defaulted Argentine bonds by imposing the debt obligation on the two accounts at Bank of America <BAC.N> and Banco de la Nacion Argentina’s New York branch.

Argentina argues that the Foreign Sovereign Immunities Act, which permits foreign assets used in commercial activity to be seized in the United States, does not authorize a court to order disclosure of information about foreign assets abroad.

On May 7, responses are due to Argentina’s request that the Supreme Court hear the nation’s appeal of an order barring it from paying creditors who swapped defaulted debt for new bonds without also paying NML Capital and other investors who refused the swap. Argentina has not made payments on the defaulted bonds since 2001.

The U.S. Court of Appeals in New York ruled in 2012 that Argentina’s official actions, including a law prohibiting payment on the hedge fund’s debt, violated the bonds’ so-called pari passu provision, which requires equal treatment for all of the debt.