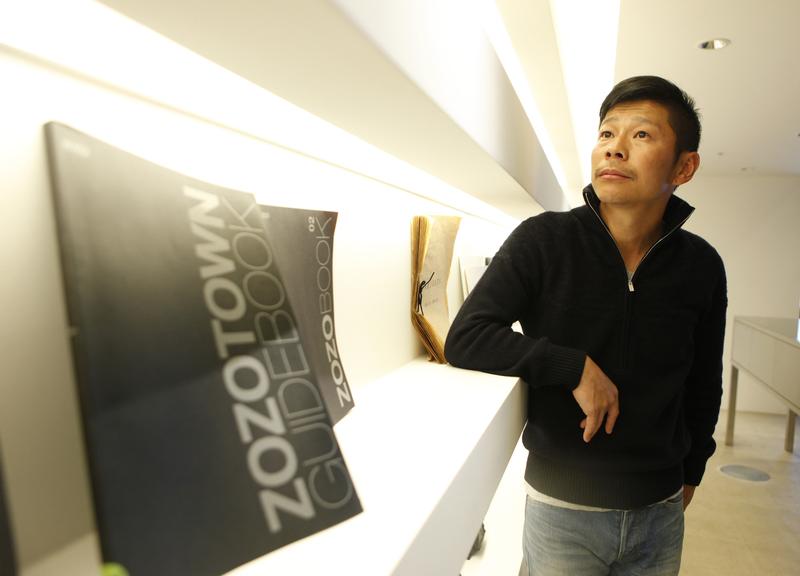 Japan’s Yusaku Maezawa is building a collection of Basquiats and other masterpieces. The soaring value of his fashion portal vividly illustrates how investors are enchanted by the tech industry’s fast growth and fat margins. It also means he can afford to paint the town red.

Yusaku Maezawa, chief executive of online fashion retailer Start Today Co, poses next to a catalogue of his online shopping site "Zozotown" after an interview with Reuters at the company headquarters in Chiba, east of Tokyo, March 27, 2012. A commitment to innovation and a laser-like focus on making consumers happy are shared traits experts agree set off Japan's emerging successes from once-proud but now-struggling firms such as Sony and Panasonic. Experts say more such success stories - found in sectors ranging from retail, Internet and mobile games to niche manufacturers - could help revive a Japanese economy stuck in the doldrums for decades and saddled with an ageing population. Picture taken March 27, 2012. To match Insight JAPAN/BUSINESS-SUCCESSES REUTERS/Toru Hanai (JAPAN - Tags: BUSINESS FASHION) - RTR309DV

Japanese entrepreneur Yusaku Maezawa bought a Jean-Michel Basquiat painting for $111 million on May 18, the second-highest price ever paid for a contemporary work of art. The sale was part of a Sotheby’s auction that brought in a total $319 million.

Maezawa, the founder of Tokyo-listed Start Today, paid nearly double the $60 million pre-sale estimate for the untitled 1982 artwork. A year earlier, he bought another work by the same artist in a Christie’s auction for $57.3 million.

Maezawa owns almost 38 percent of Start Today, which has a market capitalisation of about $7.7 billion based on its outstanding share count. Eikon data shows he has gradually cut the number of shares he holds by almost half since 2007.