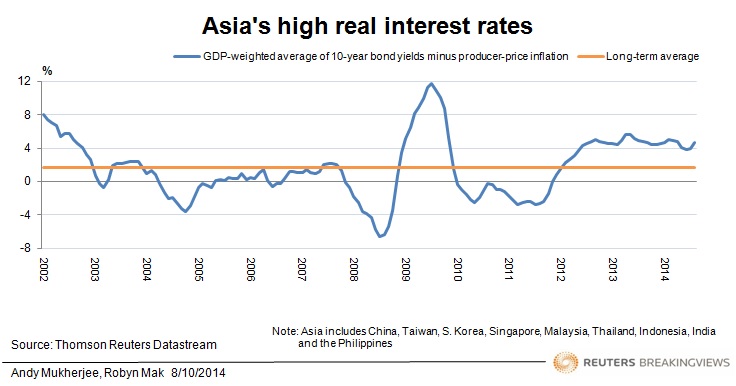 The U.S. dollar could be the winner of Asia’s fight against capital flight. The world economy might be the loser.

The region’s central banks are fearful of an exodus of capital when U.S. interest rates start rising. They are hoping to stem the flows by keeping their own interest rates high. But elevated domestic borrowing costs could cut into helpful investments.

Last year, companies, governments and individuals invested $6 trillion in Asia, outside of Japan. A smaller outlay on factories, roads and dwellings could lead to a re-emergence of surplus Asian savings. A big chunk of those funds is likely to be invested in safe assets denominated in U.S. dollars. The flow will push the greenback higher but make the global economy vulnerable to another shock.

The signs of an Asian investment slump are ominous. In inflation-adjusted terms, fixed capital formation fell 8 percent on year in Thailand in the first six months of 2014. Investment also declined in Hong Kong and Singapore, and increased at a more subdued pace than in the same period of last year in the Philippines, Malaysia and Taiwan. Only South Korea and India have witnessed somewhat swifter growth. And while China’s fixed-asset investment this year is up 24 percent, it’s a far cry from the stimulus-driven expansion of 70 percent five years ago.

Borrowing costs are to blame. For two years now, the real, risk-free interest rate in the region has been stubbornly high at about 5 percent, triple the long-term average. It looks like the early 2000s, when capital was expensive, and investment was slow to recover after the 1997-98 Asian crisis. With savings expanding at a slightly faster pace, Asian nations ended up accumulating $2 trillion in surpluses between 2003 and 2008.

Expect an encore. Foreign-exchange reserves of developing Asian nations, which were shrinking two years ago, are now growing 12 percent a year. That may be good for the dollar, but Asian thrift pays for spendthrift ways elsewhere. If the United States starts to live beyond its means once again, the “global imbalance” in savings, which made pre-crisis prosperity so fickle, will return. That will eventually make everybody a loser.

The International Monetary Fund cut its estimate of economic growth for a third time this year on Oct. 7. World GDP will expand 3.3 percent in 2014 and 3.8 percent next year, the IMF said. In July, the Washington-based lender had expected growth of 3.4 percent in 2014 and 4 percent in 2015. The potential growth rate of emerging economies is now 1.5 percent lower than in 2011, IMF chief economist Olivier Blanchard said.