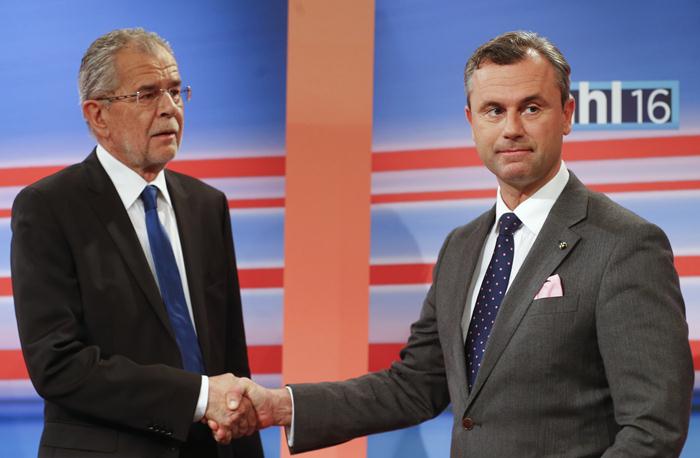 The country may elect Europe’s first fiercely anti-immigration president. Though the role is largely ceremonial, such an outcome would be a triumph for a party with an ugly past. To halt its rise, Vienna needs to fix fears over asylum seekers and flawed welfare and tax policies.

Presidential candidates Norbert Hofer of the Freedom Party (FPOe) and Alexander Van der Bellen (L) who is supported by the Greens party, shake hands before a TV debate after the Austrian presidential election in Vienna, Austria, May 22, 2016.

Austria’s presidential election on May 22 was too close to call, meaning postal ballots were set to determine whether a eurosceptic anti-immigration candidate would become the European Union’s first far-right head of state.

A victory for Freedom Party candidate Norbert Hofer over former Greens leader Alexander van der Bellen would be a landmark triumph for resurgent populist parties across Europe that have capitalised on Europe’s migration crisis and widespread dissatisfaction with traditional parties of power.

A projection by the SORA Institute for broadcaster ORF, based on 100 percent of votes cast in polling stations and an estimate of the outcome of postal voting, showed a statistical dead heat on 50.0 percent each. The margin of error was 0.7 percentage point.

The provisional result from the Interior Ministry, which did not include postal ballots, showed Hofer ahead with 51.9 percent to van der Bellen’s 48.1 percent.

Postal votes will not be counted until May 23 and their exact number is not known. A spokesman for SORA said such ballots tend to be used by the more highly educated. This is a group among which 72-year-old van der Bellen has greater support.