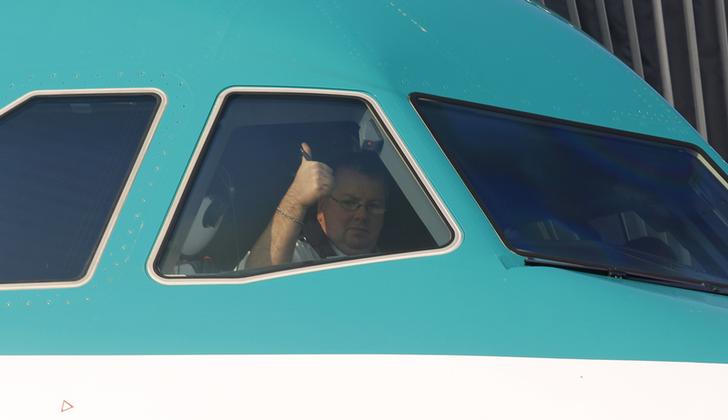 British Airways owner IAG lifted its bid proposal by another 6 pct to 1.4 bln euros. It’s still not generous. But given the conditions Ireland is likely to impose, which will limit the value of Heathrow slots, this might be enough for the Irish carrier’s board to start talking.

An Aer Lingus pilot gives a thumbs up to the ground crew after docking at the gate at the Chopin International Airport in Warsaw.

The board of Aer Lingus is considering an improved 1.36 billion euro ($1.52 billion) takeover proposal from International Consolidated Airlines Group (IAG). This is the third attempt by the owner of British Airways to buy its Irish rival.

The Irish carrier said on Jan. 26 the new proposal was worth 2.55 euros per share, up from a previous 2.40 euros. The latest proposal from IAG, which also owns Spanish carrier Iberia, includes 2.50 euros per share in cash plus a dividend of 0.05 euros per share. It is conditional on the backing of Ryanair <RYA.I> and the Irish state, who own 29.9 percent and 25 percent respectively of Aer Lingus.

Shares in Aer Lingus rose 1.5 percent to 2.38 euros in morning trading on Jan. 26. They are up 33 percent since mid-December, before the first reports about a potential IAG offer were published. Shares in London-listed IAG rose 3.1 percent to 552.5 pence a share.