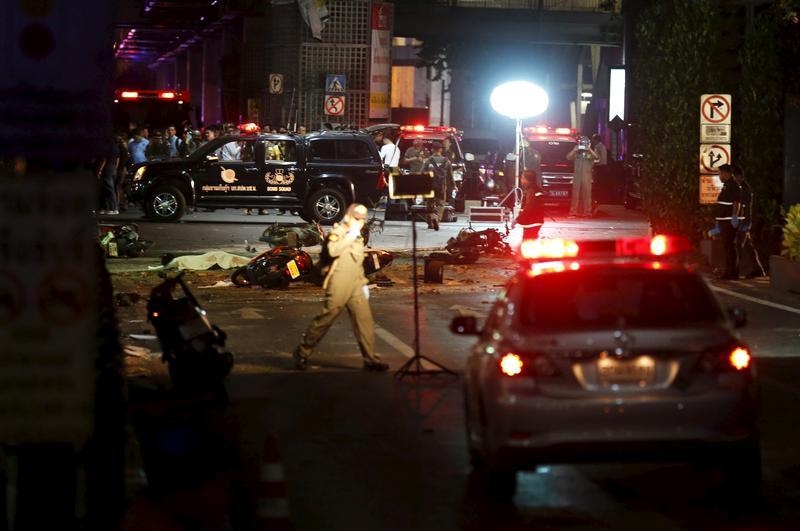 The deadly Bangkok bomb attack that has claimed at least 22 lives has also badly shaken the main source of support for the Thai economy: tourism.

Nobody has yet claimed responsibility for the Aug. 17 blast at the popular Erawan shrine, situated at a busy intersection in the capital. Nevertheless, the tragedy is bound to scare off holidaymakers and business travellers. Some travel agents in Singapore are already reporting cancelled bookings. Shares in hotel groups and the operator of the country’s largest airports dropped sharply after the start of trading on Aug. 18, dragging Thailand’s benchmark stock index down 2.6 percent.

A slump in tourism, which accounts for 9 percent of output, would be a huge setback for the beleaguered economy. Thailand’s military rulers are already grappling with flat exports, anaemic private investment, a consumer debt overhang and a drought. The 29 percent jump in foreign visitors since the start of the year was one of the main factors preventing a collapse in GDP growth, which the government says could be as low as 2.7 percent this year, among the slowest in Southeast Asia.

The Thai baht fell to its lowest level against the U.S. dollar in six years on Aug. 18. Yet the authorities might need to engineer a bigger decline to prevent the economy from slipping into a deflationary morass. Consumer prices have fallen every month this year, and it’s hard to see how domestic demand will revive quickly enough to arrest the slide in prices. The central bank’s policy rate is an already-low 1.5 percent. Besides, dwindling revenue from tourism will hurt tax collections, which in turn might halt a much-delayed boost to public spending.

Visitors shunned Thailand last year because of sporadic political violence during the final months of the democratically elected Prime Minister Yingluck Shinawatra’s rule. The army restored law and order, and tourists returned. The challenge this time is both harder, and more urgent. Without a turnaround in tourism, the last source of support for the Thai economy will wobble dangerously. That could make both policymakers and investors jumpy.

Security forces inspect the site of a blast in central Bangkok, Thailand, August 17, 2015.

“The perpetrators intended to destroy the economy and tourism, because the incident occurred in the heart of the tourism district,” Defence Minister Prawit Wongsuwan told Reuters. Nobody immediately claimed responsibility for the blast.

Thailand attracted almost 15 million foreign tourists and business travellers in the first half of 2015, a 29 percent jump from the same period last year. Travel and tourism directly contributes 9 percent to the Southeast Asian nation’s GDP, according to the World Travel and Tourism Council.

The Thai economy grew 2.8 percent from a year earlier in the second quarter, slowing from a 3 percent pace in the previous three months, according to GDP data released a few hours before the attack. The government lowered its 2015 growth forecast to 2.7-3.2 percent. The previous forecast was for 3 to 4 percent growth.

The Thai baht fell to its weakest level in almost six years on Aug. 18, falling to 35.55 against the U.S. dollar.