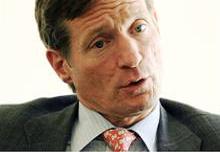 At least one of the three big bank chief executives to survive the financial crisis could be without a job by the end of 2013. Goldman Sachs’s Lloyd Blankfein, JPMorgan’s Jamie Dimon and Brady Dougan at Credit Suisse have each suffered setbacks in the past year or more. The two U.S.-based bosses have done a better job of shrugging those off. But Dougan looks vulnerable.

Holding on to the top role at a bank during the financial crisis has required guts and skill. The survivors’ club halved in size in 2012: Deutsche Bank’s Joseph Ackermann, Citigroup’s Vikram Pandit and Bob Diamond at Barclays all left their banks – though for very different reasons.

Blankfein has weathered almost three years as the lightning rod for criticism of Wall Street’s role in the crisis and of its excessive pay. He’s not out of the woods: Goldman’s return on equity for the first nine months of the year was a disappointing 8.8 percent. But for now, calls for his head have all but ceased.

Dimon, meanwhile, was knocked in 2012 by some disastrous trades that stripped shareholders of $6 billion of revenue. This blow to his reputation as a prudent risk manager forced him to reshuffle his executive team, putting two of them in the race to succeed him. But for now he has a good hold on the reins of a firm that still cranked out an 11 percent ROE in the first three quarters.

Across the Atlantic, Dougan’s summer flip-flop over whether to raise the capital deemed necessary by the Swiss central bank made him look weak and may have strained relations with the regulator. And UBS’s October decision to quit most fixed-income trading called Dougan’s strategy of sticking with the business into question. His rival’s shares soared by a fifth.

Some major shareholders still support Dougan. And he has no obvious successor. But investor support can be fickle. And unlike his two American counterparts, Dougan does not hold the chairmanship. Citi showed in October how effective that role could be when Chairman Mike O’Neill ousted CEO Vikram Pandit. None of the three crisis survivors should feel too secure in the corner office. But Dougan has the most to worry about.

Lloyd Blankfein, Brady Dougan and Jamie Dimon are the only major bank chief executives to have assumed their current responsibilities before the financial crisis hit.
Blankfein took the reins at Goldman Sachs in June 2006, Dougan has been running Credit Suisse since May 2007, while Dimon is the longest-serving bank boss, having been named CEO in December 2005 and adding the chairman’s role a year later.

Swiss bank Credit Suisse CEO Brady Dougan talks during a Reuters interview in Zurich July 18, 2012. Credit Suisse unveiled measures to boost its capital base by SFr15.3bn (US$15.6bn), a move that was welcomed by a previously critical central bank and left some investors sceptical. REUTERS/Arnd Wiegmann

Lloyd Blankfein, Brady Dougan and Jamie Dimon are the only major bank chief executives to have assumed their current responsibilities before the financial crisis hit.
Blankfein took the reins at Goldman Sachs in June 2006, Dougan has been running Credit Suisse since May 2007, while Dimon is the longest-serving bank boss, having been named CEO in December 2005 and adding the chairman’s role a year later.