From CoCo to no-no 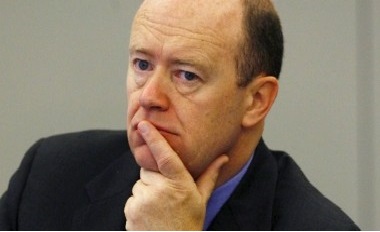 Deutsche Bank boss John Cryan has a point: new “contingent convertible” bank bonds are rotten products. Regulators are to clarify when banks will be permitted to pay coupons on CoCos to investors – and when they will not. Yet unless there is also standardisation of when they convert from debt to equity, these instruments will remain prone to death spirals.

CoCos, which convert from bonds into equity when a bank’s capital ratio falls to a prescribed level, are currently the subject of market jitters. A CoCo issued by Deutsche Bank fell to 70 percent of par value on Feb. 9. Part of this was a recent ruling by the European Banking Authority that specific bank-by-bank capital demands – known as Pillar 2 – would play a bigger role in preventing lenders from paying their coupons.

The panic wasn’t helped by opacity around different jurisdictional treatments. Lenders currently pay dividends, bonuses and CoCo coupons from reserves – but some European national regulators are stricter than others. It’s also unclear whether any of these payouts are subordinated to each other.

More transparency would stabilise a market in which many portfolio managers rely on regular payouts to sustain performance. European politicians want banks to have more leeway. One way to do this might be through a softening of Pillar 2 requirements.

The bonds have another flaw: the point of conversion. The least harmful CoCos convert when the issuer’s common equity Tier 1 ratio falls to a very low threshold, at about 5 percent. But some trigger at 7 percent or more. With some banks currently only a touch above 10 percent, the danger is that panicked investors may bring conversion increasingly close by, for example, buying insurance on the debt portion of their investment in the form of credit default swaps, a key barometer of a bank’s health.

Bank bosses could just refrain from issuing any more CoCos – the approach Cryan is taking. And regulators could mandate low-trigger levels only for new issues. Along with the more pressing need to enhance coupon clarity, this should help investors better price the outstanding 90 billion euros worth of bonds.

Deutsche Bank’s CoCo recovered to 87 percent of par value on March 14 following signs that the authorities were getting to grips with the problem. But they’ve since fallen back to 82 percent. CoCos’ difficult start to the year isn’t over.

Deutsche Bank co-Chief Executive John Cryan said on March 16 that he disliked the hybrid bond instruments that caused trouble for his bank last month, saying they were a “bad product” that were “too prone to be mis-sold.”

“It was disappointing that too many people in February didn’t know these were not bonds but shares where the coupon depended on us having the right amount at the right time in the right place,” he said. “We feel 100% confident we can pay coupons but you can’t show that.”

He indicated the bank was unlikely to issue many more, especially once it returns to profit and can build equity.

The European Parliament said on March 10 that the European Central Bank should consider loosening restrictions that govern banks’ ability to pay coupons on Additional Tier 1 bonds in the interests of financial stability.

It also called for a review of the functioning of additional bank-by-bank capital requirements, known as Pillar 2, which are supposed to target “bank-specific” risks.