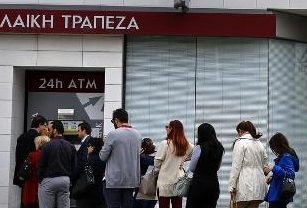 Who should lose money when banks fail? Talk of making deposits senior to bondholders might reassure savers rattled by losses in the Cyprus bailout, and avoid bank runs. But it could lead to unhealthy arbitrage between loans and deposits. Vigilance is needed, and lots of “bail-in-able” capital.

Banks in Cyprus had too little capital to support too many deposits. But the precedent may create anxiety among large depositors elsewhere, whenever a bank gets into trouble. If nothing were done, bank runs could become more frequent. European lawmakers want to prevent that.

One option is to refine the hierarchy of losses when banks fail. Insured deposits are already excluded from bail-in. The next step might be to rank uninsured deposits, accounts with more than 100,000 euros, above senior debt, loosely mimicking the U.S. practice.

That’s fair, since the senior unsecured bondholders are paid to take credit risk, while depositors aren’t. However, money that used to go into unsecured bonds could now go into long-term funding instruments that look like senior debt, but rank like uninsured deposits. Weak banks may be more heavily incentivised to borrow through secured debt, such as covered bonds, which are also exempted from bail-in.

Moreover, the amount of senior debt left to absorb losses is already shrinking, as banks borrowed more heavily during the crisis from deposits or central banks. Much of it will mature before 2015, the earliest the bail-in regime would be introduced.

Such arbitrages should be a zero sum game. The more banks issue of higher-ranking or secured debt, the higher the return investors in senior unsecured bonds should demand, as every euro of protected or preferential debt means higher losses in a default. But history suggests that banks will not volunteer to be cautious and that relying on markets to discipline banks is risky.

National regulators will have to decide the minimum amount of “bail-in-able” debt banks must hold. Unless they provide enough, they may once again be faced with the choice of burning depositors, or bailing them out. Depositors should not assume Cyprus is a one-off.

People queue up to make transactions at an ATM outside a branch of Laiki Bank in Nicosia March 21, 2013. REUTERS/Yannis Behrakis

European lawmakers are considering amending a draft European law on bank failures to provide greater protection to holders of uninsured deposits, Bloomberg reported on April 9. The move follows comments by European Central Bank president Mario Draghi on April 4, highlighting the need for a “distinction” between senior bondholders and uninsured depositors in European bail-in regimes.
“The [U.S.] Federal Deposit Insurance Corporation makes an explicit distinction between uninsured depositors which, in general, are not touched, and bondholders”, Draghi said at a press conference. “I think that the same distinction should be present in the European Commission’s draft directive. I think this is another lesson we can draw from Cyprus.”
Uninsured depositors in Bank of Cyprus and Laiki will be forced to take losses under the country’s 10 billion euro bailout.