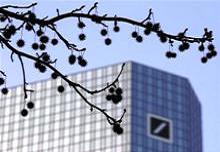 A U.S. regulator says Deutsche Bank is “horribly undercapitalised” with assets worth 61 times equity last year. The group insists leverage was less than half that. Both are right, but use different numbers. The drive to simplify regulations is clouded by accounting complexity.

The logo of Deutsche Bank is seen at the bank's headquarters in Frankfurt January 31 2012. REUTERS/Kai Pfaffenbach

Thomas Hoenig, Vice Chairman at the U.S. Federal Deposit Insurance Corporation, called Deutsche Bank “horribly undercapitalised” and said it was the worst on a list of global banks published by the regulator, according to comments reported by Reuters on June 14.
Hoenig said Deutsche Bank’s equity was only 1.63 percent of its total assets at the end of last year. Hoenig derived the ratio by using European IFRS accounting measures for the bank’s assets and by stripping out items like goodwill and deferred tax assets to arrive at a tangible equity number.
Stefan Krause, Deutsche Bank’s chief financial officer, told Reuters that on that basis the bank’s ratio is now 2.1 percent. Using U.S. generally accepted accounting principles, the ratio stood at 4.5 percent, Krause said. However, he added that a leverage ratio on its own is a “misleading measure” of a bank’s overall riskiness.