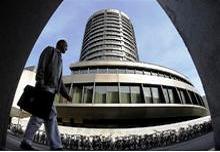 Delay is better than dilution for bank liquidity reform. Global regulators who make up the Basel Committee on Banking Supervision are set to allow lenders more time to comply with one of the cornerstones of the critically important “Basel III” reforms to stop taxpayers having to bail out the financial sector. In this case, massaging the deadline is the lesser of two evils.

With no viable resolution regime in place to enable giant cross-border banks to collapse without hurting the wider economy, the Liquidity Coverage Ratio (LCR) is probably Basel III’s most vital reform. The credit crunch’s most spectacular bank implosions tended to occur when lenders ran out of assets that could be easily sold to alleviate wholesale and retail bank runs during a panic. The LCR would grade the liquidity of bank assets so that they outstrip the flightiness of their liabilities. As a result, banks could survive under their own steam for at least a month in a crisis.

It would have been better if lenders could have fully complied with the LCR by 2015, as jumpy regulators initially planned. Yet this could have entailed banks raising 1.8 trillion euros in new liquid assets, the Bank for International Settlements has estimated. Forcing banks to do this instead of lending to revive contracting economies was, unsurprisingly, a non-starter politically.

A delay is the best workaround. The alternative – moving the goalposts so that less liquid assets like equities or asset-backed securities can count as well – would undermine the crucial confidence boost the LCR provides. Sly lobbyists have suggested that any assets currently accepted by the European Central Bank as collateral for its unprecedented liquidity support operations should be counted as liquid by the LCR too. But the ECB’s actions are more a reflection of its desperation than the assets’ liquidity.

The near-term danger is that a bank collapses while lenders take longer to become fully LCR-compliant. Yet central bank tools to deal with liquidity crises are infinitely better than they were in 2008. The Basel committee should preserve the LCR’s credibility by confining any tweaks to what it counts as liquid to a minimum. Bank investors will be grateful in the long term.

A man walks past the headquarters of the Bank for International Settlements (BIS) in Basel September 14, 2010. The implementation of Basel III rules on bank capital will push up borrowing costs for Asian companies, loan bankers have warned. REUTERS/Christian Hartmann

Global regulators are set to give lenders more time to fully comply with reforms that aim to make them more resistant to bank runs, Reuters reported on Jan. 3.
The Basel committee of global banking supervisors is expected to announce on Jan. 6 that compliance with its Liquidity Coverage Ratio, which requires banks to hold sufficient quantities of liquid assets that can be easily sold in a crisis, will not be fully required by the original 2015 deadline.