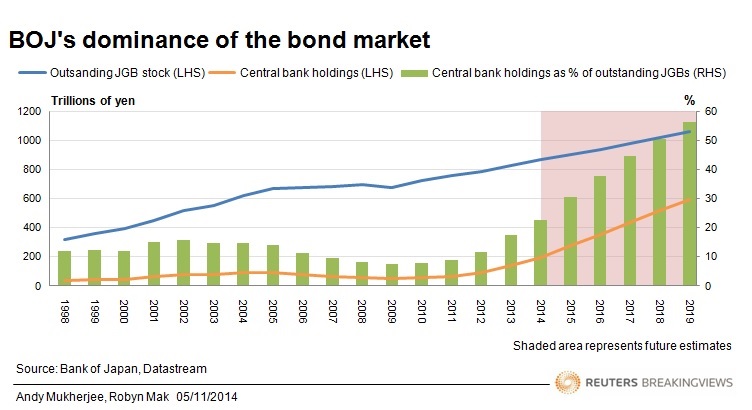 The Bank of Japan’s bond vault is starting to resemble a black hole: debt keeps falling in, never to escape. At least, that’s what investors want to believe. If their expectations change, the consequences for Japan’s bond market could be ugly.

The BOJ already owns Japanese government bonds (JGBs) worth 200 trillion yen ($1.76 trillion), or 24 percent of all public debt in issue. Last week, it raised its annual bond-buying target from 50 to 80 trillion yen. Assuming public spending remains stable, another 7 percent of all outstanding JGBs will succumb to the central bank’s gravitational pull next year. If yen-printing continues at this pace, the BOJ could own half of Japan’s government bonds by 2018.

The BOJ could dial down asset purchases when inflation approaches its 2 percent target sometime in 2016. Even then, however, it will own JGBs equivalent to 70 percent of Japanese GDP. Shrinking its balance sheet will be very difficult.

To see why, assume the BOJ decides to reduce its JGB holdings to 12 percent of GDP – the level it held back in 2007. It could do so by selling bonds, or by not reinvesting the proceeds of maturing debt. Either way, some other investors would need to buy bonds worth 3 percent of GDP annually for 20 years.

To prevent these investors from demanding very high – and potentially destabilizing – yields to step into the breach, Japan’s government would have to curb borrowing. But cutting social security or raising the consumption tax beyond next year’s planned increase to 10 percent will be politically contentious. Besides, simultaneous fiscal and monetary tightening could send Japan’s consumer economy into a near-permanent funk.

A more rational bet is that Japan’s ageing society won’t encounter much inflation. A sustained rise in wages has so far proved elusive. The central bank won’t need to sell government debt and the BOJ’s vault will turn into a black hole. The bonds that go into it won’t pop out again; and those that remain in private hands will stay in a pricey orbit. Right or wrong, that is the bet investors are making.

The Bank of Japan’s policy board decided on Oct. 31 to expand the monetary base by 80 trillion yen ($723 billion) a year, compared with its previous pledge of a 60-70 trillion yen annual increase.

The Bank of Japan’s policy board decided on Oct. 31 to expand the monetary base by 80 trillion yen ($723 billion) a year, compared with its previous pledge of a 60-70 trillion yen annual increase.