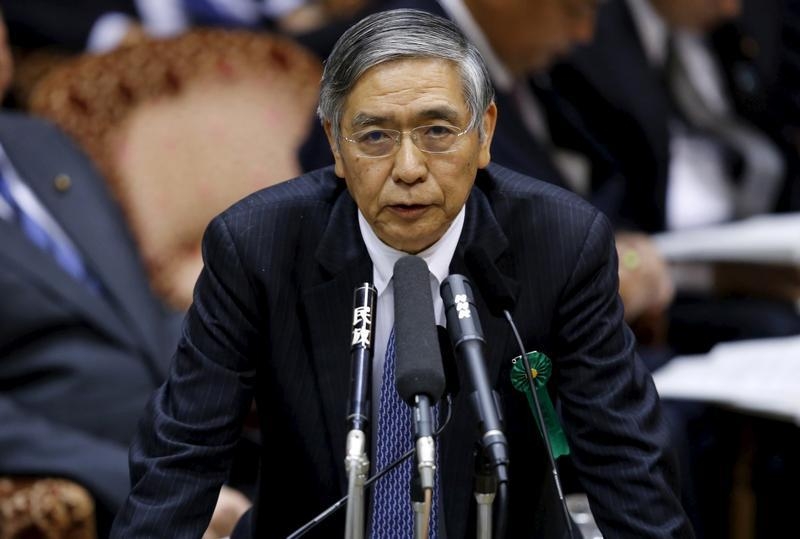 The Bank of Japan has not lost its capacity to shock. For the third time in less than three years, the central bank has taken investors by surprise with an aggressive move to loosen monetary policy. The latest salvo involves cutting interest rates below zero. That weakens the yen and opens a new front in Japan’s battle against deflation. It could also backfire.

It’s little more than a week since BOJ Governor Haruhiko Kuroda told Japan’s parliament he was not thinking of adopting negative interest rates. Yet any damage to his trustworthiness was overwhelmed by the market reaction. The yen weakened more than 1.5 percent against the U.S. dollar. Japan’s main equity indexes jumped almost 3 percent. The yield on 10-year government bonds halved to 0.11 percent.

In the past, economists have worried about the damage Japanese banks would suffer if they were forced to pay for the vast sums they hold with the BOJ. The central bank has worked around that problem by introducing three tiers of interest rates. In practice, the new rate of minus 0.1 percent will only apply to new deposits.

But the broader point is that the BOJ now has a new weapon with which to keep up the fight for higher prices. It can cut rates even further in the future, putting extra pressure on companies and consumers to put their savings to more productive use. Meanwhile the BOJ will continue to buy up government bonds worth 80 trillion yen ($660 billion) every year – a programme that Kuroda insists it could still expand.

Whether the new policy has any more success in sparking Japanese inflation remains in doubt: despite nearly three years of all-out assault, the target for 2 percent annual price increases remains distant. The BOJ’s own forecast is for the consumer price index to rise just 0.8 percent in the coming fiscal year.

What is clear, however, is that the central bank has been spooked by recent market turmoil, including the falling price of oil and worries about China’s economic slowdown. That had pushed up the yen, threatening to undo the economic benefits of the weaker currency. Adopting negative rates helps to insulate Japan from the colder economic winds blowing from abroad. But it also makes it harder for other countries – particularly China – to stabilise their own currencies. In that sense, the BOJ’s latest barrage risks adding to the tumult that forced it to act in the first place.

Bank of Japan (BOJ) Governor Haruhiko Kuroda speaks during an upper house committee session at the parliament in Tokyo, Japan January 21, 2016. Kuroda said on Thursday he was not thinking of adopting a negative interest rate policy now. REUTERS/Toru Hanai

The Bank of Japan on Jan. 29 shocked financial markets by adopting negative interest rates to forestall risks that global market volatility could damage business confidence and revive a deflationary mindset.

In a 5-4 vote, the central bank decided to charge 0.1 percent interest on current accounts that financial institutions hold at the BOJ.

“The BOJ will cut interest rates further into negative territory if judged as necessary,” the BOJ said in a statement.

The BOJ maintained its pledge to expand base money at an annual pace of 80 trillion yen ($675 billion) via aggressive purchases of government bonds and risky assets.

In a quarterly review of its forecasts, the BOJ cut its core consumer inflation forecast for the coming fiscal year beginning in April to 0.8 percent from 1.4 percent projected three months ago.

However, it expects consumer inflation to accelerate to 1.8 percent in the following fiscal year.